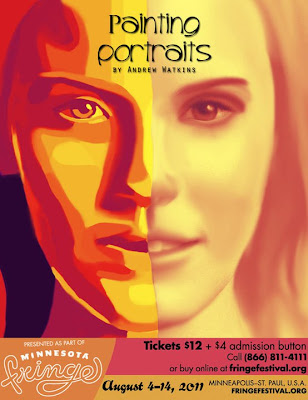 One of the reasons I put Painting Portraits from Watkins Theater on my Top 20 list this year is it's the kind of show I like to see most at the Fringe - a new play in development. The challenge with Painting Portraits in its current state is that it feels like an idea that's big enough for a two-act play, but it must content itself for the moment with squeezing into a Fringe-sized package. Too much play, rather than too little, is a great problem to have, but as any Fringer who's had to cut their show down to size can tell you, it's a painful problem to have, too. But it's not a painful problem for the audience. It just leaves us wanting more - and that's another good problem to have.

Anthony (Mike Matson) and Tom (Andrew Watkins, also playwright and producer) are two painters who are struggling with the fact that though they still have the desire to paint, their paintings never come out the way they want. Anthony can only paint things exactly as they are, and he wants to be abstract and free, finding the beauty and truth underneath the details of life. Tom is the abstract painter Anthony wishes he could be, yet Tom longs for the photographic reality of Anthony's paintings. Two guys discounting their own gifts, wishing they could see the world and process it differently. Tom runs his own gallery, or rather owns a gallery which his long-suffering buddy Arthur (Daniel Duren) runs for him. The gallery shows Anthony's work, and does good business selling his paintings, as well as Tom's. Tom and Anthony meet, and their mutual admiration society leads to a plan. They'll each keep painting, but turn the paintings over to each other to sign instead. They switch creative identities. This doesn't sit well with either Arthur, or Anthony's sister Clara (Hannah Halvorson), each of whom would love to be able to paint in the way that Tom and Anthony are taking for granted.

If you've read this blog much at all, you know that "art about art" or "art about artists" is among my least favorite genres. The worst of it, and there's a lot, is a lot of lazy, self-indulgent, navel-gazing most of the time. But there are times when the writer gets it right. Watkins is one of those writers. Because he's approaching the artists as human beings first, and artists second. He realizes he's trying to create human beings on stage here, with distinct personalities, and not just mouthpieces for the playwright that spout off about the importance of art (blah, blah, blah) as if it's a substitute for character. Tom and Anthony, and their relationships to each other, as well as their relationships to Arthur and Clara, are the meat of the play. Art is just an excuse to get them together and see what happens.

What we get in Painting Portraits is an intriguing set up, and the beginnings of the exploration of how that set-up plays out. There's tons of potential here and the only real frustration is we don't get a chance to see more of it. The relationship between Anthony and Tom in particular is most interesting, because there's something going on under the surface here. It's not just two artists admiring each other's work. Anthony's intense connection to Tom, and Tom's willingness to play along with it, and challenge Anthony to take it further, is more than a new friendship brewing. It's not quite homoerotic, but it's in the same neighborhood. The same could be said for Arthur's devotion to Tom and his painting and his gallery.

Anthony's sister Clara is also just a little too invested in her brother's career to be normal. The intensity of Clara's revulsion in reaction to Anthony's plan to let someone else sign off on his work while he takes someone else's work as his own speaks more to her desire for - an artistic life of her own? any life other than her own? trying to build a different family with her brother than the one she got stuck with and he abandoned? Again, we can't know in the story's current state because it doesn't have the time to take us to that next level. But the foundation is there, and you get the feeling that you could dig for quite a while before you find the bottom of it.

The launching platform that the Fringe provides is invaluable for developing new work like this. The constraints of the Fringe process, which are necessary, can make the presentation of new ideas challenging sometimes. The style of the writing (the deliberate repetition in the text especially) can sometimes not get the best viewing if it doesn't have the full room it needs to breathe. A different outlet, different actors, different director, would all produce a different result. Not better or worse necessarily, just a different angle, a different way of looking at the same picture on the wall in a different context. But the Fringe is a great place to get started and I'm happy to see them all wrestling with the concept in whatever way they're able.

These are the things that Painting Portraits gets spinning in my mind. And why I'm glad Andrew Watkins is writing, and he can gather actors and a director like Sylvia Bay around him to help get the words out there in front of a crowd.

I just want more. (Which, again, is a great problem to have.)