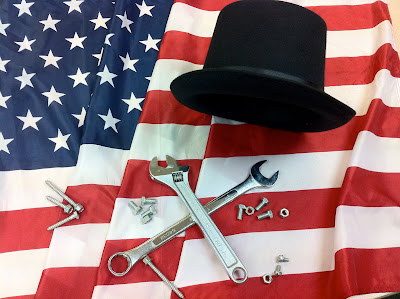 Robot Lincoln: The Revengeance (The Musical) has provided me with what I think is my favorite line of the 2011 Minnesota Fringe Festival.

There is a robot rumble between two groups of robot presidents, some siding with Robot Lincoln, some with John Wilkes Booth (just go with me here for a minute), and Robot George Washington steps forward and says,

"I cannot tell a lie. I'm gonna fucking kill you!"

Every time I think about it, I can't stop laughing.

I've said it before, I'll say it again: This play is so deeply, deeply wrong, on so many levels, I can't help myself. I am in love.

"Your days of reciting badly written iambic pentameter are over!"

So John Wilkes Booth (Jason Garton, in ruffled shirt, cheesy fake mustache and sneakers) interrupts the opening sock puppet chorus in praise of President Lincoln to shoot a sock puppet Lincoln in the head. (No, really.)

"That's why I picked you. That, and you weren't fully decomposed yet."

Robot Lincoln gets his robot butt kicked by Booth's own army of robot presidents - Robot Andrew Jackson (Dustin Jackson, also writer/producer), Robot FDR (Katherine Rapacz, in a tank instead of a wheelchair, though he still can't do steps), and Robot Hilary Clinton (McKenzie Jones - yes, I guess this means she's president in the future).

"The only thing you have to fear is - my 250 millimeter cannons aimed at your face!"

But before they get too involved in their own little war, Robot Gengis Khan (David Wasylik) appears to pose an even bigger threat, which all the robot presidents must band together to fight, especially since Khan kidnapped Mary Todd Lincoln (also Slater), all with the help of Benedict Arnold (Taylor Johnson), who, in a running gag, everyone is repeatedly shocked to find has betrayed them again.

Yes, it's that bizarre. That plot synopsis has either convinced you you simply must see it, or you must run far, far away in the opposite direction. But don't run. This is how much off-the-chart weird fun Robot Lincoln is: it is a musical, and yet, God bless 'em, none of the cast could carry a tune if you gave them a bucket. And It. Doesn't. Even. Matter. Everyone involved is so ferociously devoted to this oddball premise, and the script is so relentlessly weird and laugh out loud funny, you can't help being swept up in the lunacy with them. In fact, the act of them straining to do a traditional musical theater piece despite an unforgiving backing track of music (which finds them perpetually off the beat) and their own vocal limitations just makes you love them and this goofy Fringe show even more.

"He took your bitch!"

The script, by Jackson and writer/director/co-producer Travis Berg and composer/musical director Robb Krueger, is full of jokes in South Park-level poor taste and yet, just like South Park, I could not restrain myself from laughing, probably howling, much of the time. There was a point at which I thought Mom might hit me if I didn't pipe down.

"Your cliche lines mean nothing to me."

A big heap of praise must go to costume designer Hannah DesMarais, whose work here is spectacularly cheesy and perfect for Fringe. The robot presidents all get liberal helpings of "metal" in their outfits, whether it be constructed of duct tape, tin foil, pie platters, license plates, or cardboard rolls spray-painted gray and gold. There's also a lot of bright red, white and blue going on, of course. The costumes really make the show here. DesMarais is so inventive with such meager resources, it makes you ponder what she might do with a real budget.

When Robot Lincoln and John Wilkes Booth sang their love song to open the Out of Towners Showcase on Wednesday night, emcee and Fringe Executive Director Robin Gillette took the stage afterward to say, "You know, it's been a long day, but after five minutes of that, I'm reminded I have the best job in the world. Thank you, Robot Lincoln." (No, that's not an official Fringe endorsement. Mine will have to do.)