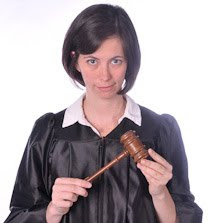 I've already mentioned that I had a really good feeling about SCOTUS! (Supreme Court of the United States!) in a couple of other places in this blog. Having seen the show now I can happily report that the show matched my expectations.

Writer/Producer Brandi Brown was a delightful spokeswoman for her play, and that play is just as funny as she is in person. And just as smart. So smart, in fact, I'm a little intimidated, but that's a good thing. So often comedic political theater is dumbed down and overly simplified and, frankly, boring. It doesn't ask anything of me, so it doesn't get anything from me, nor I from it. SCOTUS! is a better breed of political comedy.

"The only reason the Founding Fathers put the right to bear arms second is that we needed free speech in order to demand that we be given guns!"

Chief Justice Smith (Danielle Siver) has received her exalted post at the head of the nation's highest court largely due to her experience with internet law, and her youth (guaranteeing that she won't be vacating her post by dying anytime soon). Her clerk (Jeannie Lander) is also her best friend and confidante. Her co-workers are a very mixed bag. Justice Winchester (Heather Stone) constantly refers to the intent of the Founding Fathers in ever more ridiculous fashion, though she's no unthinking dummy. Underestimate her at your peril. The central battle of wills in the play is between Smith and Winchester. Justice Frankwell (Peter Ooley) is a constitutional scholar who really just wants to break in to showbiz. Justice Hansen (Analiese Miller) is a fitness enthusiast and sports nut who struggles to juggle those passions with her career in law. Law often loses. The other justices have had to recuse themselves because of the nature of first case on Smith's docket (clever way to limit cast size there, Fringers!)

"It's a government shutdown, but don't worry. Everyone's still getting paid, it's just that nothing's getting done."

The case - Wisconsin, in a bid to lure the high tech jobs of the aerospace industry, has decided to repeal the law of gravity. Smith wants to know how drunk the legislature was when they passed this law. The recused judges also want in on that aerospace money, so they have to sit this one out. Providing running commentary, convenient backstory and other assorted exposition is the two person Greek chorus of Katie Berkus (Kate Urquhart) and Gregory Johnson (Greg Beltz), two velvety voices behind the news at National Elitist Radio (N.E.R. - Where we're a little better... than you.) The banter and mutual disdain of the two radio jockeys is an amusing counterpoint to the already amusing doings in court.

"Gravity. What's next, friction? It's a slippery slope."

Also hovering over the proceedings is the decision of whether or not to open the Supreme Court to cameras for the first time in its history. Smith is for transparency, Frankwell sees a link to the big time, Winchester knows the Founding Fathers would have none of it, Hansen doesn't seem to care much one way or the other.

The play isn't so much a play as it is an extended comedy sketch. Not that there's anything wrong with that. It is a very funny and successful comedy sketch, and it doesn't stretch its premise past the breaking point. Brown has a lot of points to make and barbs to launch at her satirical targets and she does it with great skill. Matthew Glover directs the whole thing with a light touch that keeps things moving right along. The cast all seem to be enjoying the heck out of their roles, particularly Heather Stone as the formidable Justice Winchester. Her character is not easily outmaneuvered but when cornered, and she explodes, her titanic meltdown is a doozy.

It's probably not fair to ask for a lot of character development here. That was the only thing I was missing. The characters all only go so deep. This is largely an intellectual exercise, rather than an emotional one. The consequences are cerebral rather than personal. While it doesn't hit you in the gut or the heart, SCOTUS! sure does hit you in the funny bone, while also giving your brain a workout. That makes it a damn fine Fringe show.
Posted by Matthew at 8/05/2011 04:24:00 PM
Labels: 4-1/2 Stars Damn Near Perfect, Fringe Archives 2011, Fringe blogging