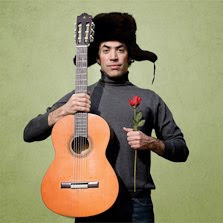 Dylan Fresco is one of the smart people. He's a person who had the good sense to talk to the people who knew his family history before their memories started to fade. In Domino's Pizza Saved My Life, Fresco paints a vivid portrait of his grandfather, a man who came over from the old world to the new world, and as it turns out, just in the nick of time.

It isn't until almost halfway through the show that Dylan confesses that he never met his grandfather. The old man died when Dylan was still in utero. Which makes the telling of his grandfather's story that much more remarkable. What it also means is that Dylan comes from a family of storytellers, since his father provided Dylan with much of the information from which to reconstruct his grandfather's life.

"He only knew three words: Yes, Please, and Thank You."

I've often wondered about Dylan's unusual eyebrows and this production solves the mystery - for one of his jobs, he's a hospital clown. Though there is no clowning in this show, Domino's Pizza Saved My Life uses a lot of clown tricks, telling its tale with a great deal of humor, expansive physicality, and music. This is no dry travelogue or historical reenactment. There is a lot of warmth and laughter and humanity, all served up with an ever-present whimsical twinkle in his eye. The show wisely begins in the same fashion as his Fringe-For-All preview, with him singing and translating a Russian love song at the same time...

Humor and music are always great ways to pull an audience in, and Fresco's skill with song and guitar are just as nimble as his comic timing. (After hearing some people struggle just to carry a tune in other Fringe venues, it was most enjoyable to just kick back and have someone effortlessly sing me a song or two.)

Though the tale of Dylan's grandfather is amusing and engaging, Domino's Pizza Saved My Life is mostly about Dylan himself. Everyone's life has some peculiar story embedded in it somewhere and Dylan's is no different. As a teenager, he went away to a summer camp that brought American and Soviet children together to help promote understanding and world peace. As the only boy interested in signing up for theater, he ended up as part of a singing group from the camp that toured up and down the east coast. And just as they were wrapping up the summer camp tour, the military tried to take over the Soviet Union. For a while, there was nowhere for his new Soviet friends to fly home safely.

"We were throwing down a lot of gas over there. You might want to take this other route..."

Years later, Dylan finds himself, along with a friend, in the middle of a different type of musical concert, all tied up in the protests surrounding the Republican National Convention of 2008 in St. Paul. The lesson of his teenage years returned - that you don't always have to know the lyrics, so long as you sing with enthusiasm with those around you. Dylan didn't intend to get swept up in the marches or the protests. In fact he nearly managed to escape when his friend insisted on a detour for some pizza. This seemed like a good idea, until the front window blew out and tear gas started pouring in.

"Little groups of police at the end of the street. Dressed in full riot gear. Just waiting."

Dylan's grandfather made the journey from the Soviet Union to America many years before, not to visit like those kids at summer camp but to make a new home. Since the extended family left the Soviet Union but not all of them left Europe, the shadow of the Holocaust fell on this family, as it did on many. (You didn't honestly think we were going to get through a family history of Jews in Europe without being sideswiped by the Holocaust, did you? No family's that lucky.) With such charged material, Fresco knows to exercise restraint. Less is more. Oddly enough, I think he might have even gotten away with still less. Right now he definitely knows how to fill a silence with story and jokes and song. Allowing a moment, especially one like this, to breathe, with no additional commentary needed, that's a trickier balance to strike. And probably a harder thing for any storyteller to trust. Wielding silence the same way he wields words, that's very likely the next step in his development. Sometimes you don't need to work as hard as you think you do to tie things up in a bow for the audience at the end. Sometimes the story speaks for itself.

I'm finding it very hard to write about this show in a coherent fashion because it does tend to leap back and forth and in time, with well-chosen song breaks to help aid certain transitions. It's easy, and enjoyable, to follow, just hard to reconstruct afterward. But then, that's why he's telling the story, not me. Domino's Pizza Saved My Life is how you do a one person show right.
Posted by Matthew at 8/06/2011 08:37:00 AM
Labels: 5 Stars - Life-Altering Experience, Fringe Archives 2011, Fringe blogging