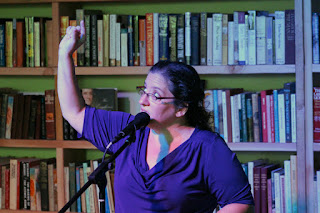 Tweet review - #mnfringe The Adventures of Crazy Jane and Red-haired Annie: first thought, "that was lovely"; her voice, the detail, perfect - 5 stars

This is a good example of how a preview, particularly for a traveling Fringe artist, can do you a lot of good.  I had a slot of fill between shows at HUGE that I really wanted to see on Wednesday (Yes! Feed The Monkey! and Hostil Watching - more on those charming oddballs later).  I didn’t really want to travel too far and run the risk of missing a show (plus as it turned out, that was the night of the flash flood warnings and torrential rain so, definitely staying put), that left me in Uptown.  Wasn’t really in the mood for dance, so that left out Intermedia.  It was either walk down to the BLB or stay at Huge.  Looking at both shows, one had better reviews than the other (often from people who reviewed multiple shows, another good sign) AND I’d seen the artist do a preview at the traveling artist showcase the night before Fringe opened (Fringe Eve, as they say).  At the time I thought, hmmm, good storyteller.  Not sure if it’ll wind up on my schedule with so much other stuff floating around, but she’s a very good option to have.  And that’s what tipped me over to staying at HUGE and seeing Laura Packer perform The Adventures of Crazy Jane and Red Haired Annie: Adventure stories for grown-ups.  And boy am I glad I did.

“There will be times when sleep eludes you.”

Laura Packer knows the two most powerful tools in her bag of tricks are her own voice, and her way with crafting words, and she deploys them both to full effect throughout Crazy Jane and Red Haired Annie.  The odd thing is, as I think back on it, Packer is not one of those histrionic solo performers who bounce all over the stage, presenting one showy character after another, modulating her voice and its volume up and down the scale.  She might gesture with her arms, hands or even just her fingers, but she largely just stays put.  And she gets right up in the microphone on a stand and lets her soothing voice do the heavy lifting.  That, of course, and the words.  Oh, those words.

“A scale from the serpent who encircles the earth.”

Packer creates several fully realized fantastical worlds, full of detail, color, light and sound.  There’s a period in one story when the two main characters split up and Packer is switching back and forth between the two storylines of their individual quests.  Not only does she cut out in just the right place to leave you in suspense and flip over to the other plotline, she always lands you right back where you left off, so you’re never confused what’s going on.  That’s quite a trick, and she nails it so perfectly, you’re liable to overlook just how hard it is.

“The world for a moment sounded like tiny ringing bells.”

Even though the title assures you it’s adventure stories for grown-ups, you could be forgiven for thinking the names Crazy Jane and Red Haired Annie are headliners in some child’s fairy tale.  But as entertaining as these stories might be for kids, it feels like only adults are going to get the full impact, understanding how Crazy Jane became crazy, or the “normal” life she left behind, or the stakes involved in saving their friendship, or lost children.  I also think adults especially will appreciate Packer’s soothing voice, and her sense of wonder that is also still oddly based in a thinking person’s reality.

“It told of the true color of the sky when the world was young.”

If you’re looking for some solid, top tier storytelling, Laura Packer has you covered.  I caught her late, but there’s still one performance left in her run (today, Friday 8/12 at 5:30pm).  She’s definitely worth slotting into your schedule.  I was not expecting to see this show, or that this was the kind of show I’d enjoy, and yet Laura Packer and The Adventures of Crazy Jane and Red Haired Annie completely won me over.