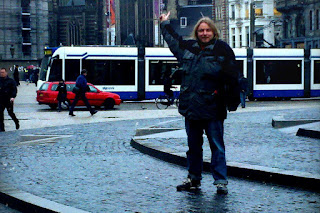 A couple in an Amsterdam Hostel. This is a true story. Out of respect for some involved things have been changed, for everyone else it has been told exactly as it occurred. 10x10. Matt Alto & Amanda Chial

Matt Alto and his compatriots presented some razor sharp, seriously uncomfortable comedy/satire that not everybody laughed at (or got, or enjoyed) in 2007 with Blonde On Blonde.  I laughed, I squirmed, I got it, I enjoyed it.  So when they came back in 2008, they landed at number 3 on my Top 10 list that year.  I’m happy to say they’re back yet again in 2016 with their new show Hostil Watching.  This time including someone listed as “Stage Manager/Shadow Figure.”  I got an email recently from Matt Alto and he said “I do not want to give you a specific pitch for the show Hostil Watching, as I think that a sense of mystery and wonder will add to the experience.  Though I will say that I think it's the most honest and important shows that I have produced.  At moments it may appear immature, but I think it's one of the most mature shows I've directed.”

So it seems to be in line with some things I wrote about their very first show, a review which they quoted (along with several of their more insulting audience comments) to publicize their second show:

“Watching it you’re sometimes tempted to think, ‘Boy, these guys are stupid.’ But no one stupid makes a show this smart. Someone once said, ‘Life is a comedy to those who think, and a tragedy to those who feel.’ The Drollery is thinking. You may be feeling. It’s a testament to this odd little piece of work that it works no matter which direction you’re going with it. These guys are on to something. Just what that is, is still anybody’s guess. But I wouldn’t say no to more of it.”

If you haven’t seen The Drollery in action, you should see Hostil Watching.  If you’ve seen The Drollery in action, then I really don’t need to convince you to go see Hostil Watching, do I?  This isn’t one of those blockbuster Fringe hits, but I’d be willing to wager it’s still essential Fringe viewing.  I’m looking forward to it.  (It’s up against other things Mom wants to see in her limited Fringe visit, or on the other side of town for one of our days, but I’m determined to see it come Wednesday 8/10.  You lucky readers don’t have to wait that long - you can catch one of their first three shows at HUGE theater during opening weekend - Friday 8/5 at 5:30pm, Saturday 8/6 at 4pm or Sunday 8/7 at 8:30pm.  Go.  Laugh.  Squirm.)
Posted by Matthew at 8/04/2016 04:21:00 PM
Labels: Fringe Archives 2016, Fringe blogging, Fringe Top 10/Top 20 Returnees - 2008