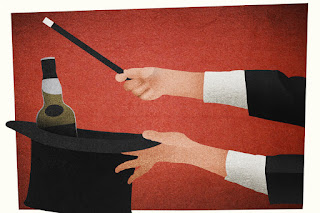 Tweet Review - #mnfringe The Disillusionist: never has a disastrous magic show been so wickedly and delightfully entertaining - 5 stars

The Disillusionist was lurking near the top of my pre-Fringe Top 10 list largely for one reason and that was Neal Skoy.  Skoy wrote and stars in The Disillusionist and in both roles, as expected, he’s fantastic.  The Disillusionist tells the tale of the ill-fated final magic shows of the summer at the ramshackle theme park Wonderpark America.

“Ladies and gentlemen, you’ve all come to this show tonight expecting another disaster.  I hope I didn’t disappoint.”

The headliner is magician Tony Danglero (Skoy), a guy so down on his luck he’s practically a country song - he’s divorced, he’s got both a drug and alcohol problem, he’s being evicted, and if this magic show is any indication, his career isn’t going so hot either.  Add to this that his lovely magician’s assistant Darleen (Autumn Sisson) would rather be anywhere else (except she can’t be, because she’s got a monitoring ankle bracelet on, due to a criminal offense to be revealed later).

“She had a massive concussion and now she speaks with a dialect.”

Darleen’s a serious artist who gets an interpretive dance break in the middle of the show.  Willing audience volunteers get tiny magic wands for their efforts.  Most, but not all, of the tricks work as planned, but then during the finale of the first show of the day Darleen has an accident and has to be carted off by two extremely inept paramedics.

Since Wonderpark owner Mr. Manfield (Michael Fischetti) won’t hear of cancelling the second show (the disaster of the first one has people lined up to see the train wreck of the next one), long-suffering (fake) stage manager Craig (Michael Renner) is drafted to take Darleen’s place.  Unfortunately he also has to wear Darleen’s outfit.  And Tony goes missing, on a minor bender.  Meanwhile an IRS agent (Rachel Nielsen) has come sniffing around the show to track Tony down, an equally unhappy cop (Mark Deel) has come looking for Darleen, and a ditsy cleaning lady (Caitlin Reilly) is wholly unequipped for the messes everyone insists on unleashing onstage.  When Tony reappears, clearly under the influence, the magic show we saw earlier comes completely unglued.

“I don’t know who’s a better magician, me or my ex-wife’s lawyers.”

It’s not nice to laugh at the misfortune of others, but the way Skoy has crafted this story, and director Tyler Olsen and the acting company have executed it, you just can’t help yourself.  How assistant director and actual stage manager Beth Grimes coordinates keep all those wacky plates spinning and the plot barreling forward is anyone’s guess.  All the elements - Anita Kelling’s sound, Barb Portinga’s costumes, Nathan Cooke’s illusions and set pieces, and Benjamin Domask’s magic and movement work - come together to turn the comedy up another notch.

“This is small turds, people!”

The Disillusionist would be almost too sad to watch, if it weren’t at the same time so busy being ridiculous.  You have to make yourself think hard to even remember Tony’s misery, because The Disillusionist keeps hijacking your brain with farce and won’t let go.  Everyone in the cast is a hoot, but it’s Skoy at the center of it all - using several different octaves of his voice, his seemingly indestructible body, and all the magic and clowning tricks at his disposal - that rivets your attention.  The Disillusionist is a hell of a showcase for everyone involved.  And it’s a delightful grab bag of comical mishaps for the audience.  Comedy that doesn’t make the viewer feel stupid for enjoying it so much, perfect Fringe fare.