Fringe 2016 - It Is So Ordered: The Supreme Court’s Greatest Hits - Maybe America Isn’t So Screwed Up After All - 5 stars 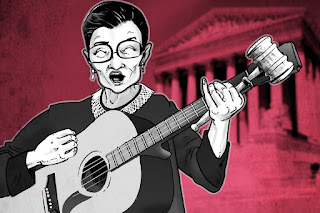 Matthew Foster (the man at the heart of American Civic Forum, and the brains behind their Fringe show, It Is So Ordered: The Supreme Court’s Greatest Hits) will probably hate me for using this analogy but it’s in support of his really fine production so perhaps he will forgive me.  You know the kind of contact high you get off of watching a really good episode of that TV show The West Wing?  “Hey!  America!  Government!  Democracy!  Maybe we can make it work after all!”  That feeling?  That’s how you feel as you sit and listen to the performers in It Is So Ordered.  And the even greater thing here is, it’s not fictional.  This stuff actually happened.

“Our Constitution was deliberating written to be frustrating.”

Our host Matthew Kessen (no doubt channeling the voice of Mr. Foster) provides the context and historical/cultural connective tissue between the speakers, but the show is really about showcasing the words and opinions (and dissents) of Supreme Court justices past and present on race, education, and the civil rights of America’s citizens - all its citizens, whether they like or approve of one another or not.  The dissents are often more compelling, and prescient, than the opinions on the winning side of cases, so there’s a mix of both.

“The Supreme Court has lit more than a few dumpsters on fire over the course of its history.”

The night I saw it, the wry wit and intellect of the late Antonin Scalia in a case revolving around professional golf was being read by Pat Harrigan.  Duck Washington got to take on the mantle of the fiesty Ruth Bader Ginsburg talking about drug testing in schools.  Moving backward from the 21st century into the early half of the 20th, Tim Uren took on the pledge of allegiance to the US flag as Justice Robert H. Jackson.  phillip andrew bennett low tackled the subject of race back in the late 19th century as Justice John M. Harlan.  Rachel Flynn got to take down Colorado’s anti-gay Amendment 2 as current Justice Anthony Kennedy.  And Zoe Benston rounded out the evening as Justice Sonia Sotomayor dissenting in a case grappling with the limits of police power.  Stirring rhetoric in the hands of great actors is a win-win.  Foster and company realize the best thing to do is just get out of the way and let the justices speak.

“The Fourth Amendment doesn’t forgive a police officer just because he didn’t know any better.”

It might not sound to everyone, on paper, like a real barn-burner of an inspiring Fringe show, but trust me, it is.  It was the end of Mom’s fringing for the season (she only stays for the first six days of the festival - but she crams a show in every available timeslot).  It Is So Ordered was Mom’s 30th and final 2016 Fringe show, but it was a perfect way to make you feel a little better about where we are, how far we’ve come, and where we’re headed.  These days, that’s a gift.  More American Civic Forum, please.