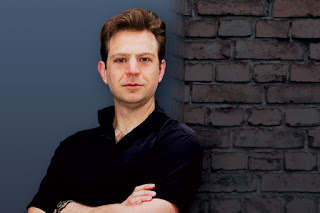 Tedious Brief Productions switches up the formula yet again, and cranks out another very entertaining pop-culture/classics mash-up.  This time, instead of putting Pulp Fiction through an iambic pentameter translator (Bard Fiction), or doing a Shakespearean sequel which bears a striking similarity to a scifi/horror franchise (Tempests), they just put two Fringe interpretations of two classics up side by side and watch them overlap and meld into one another.  Because if Joseph Campbell taught us anything, it’s that the template of a hero story and recycled Hollywood formulas have more in common than we liked to admit.

“I’ll be there faster than you can say ‘wise old teacher who clearly won’t last the length of the film.’”

The set-up is that two battling sets of artists both think they’re scheduled for the same slot in the Fringe Festival.  Clarence Bratlie Wethern gets there first with his one-man tribute to the legend of Beowulf. Kayla Dvorak, Brandon Ewald, Delta Rae Giordano, David Schlosser and Noe Tallen interrupt because they want to get started on their musical version of the cult favorite Patrick Swayze bouncer movie Road House.  One problem - their Swayze stand-in for the role of Dalton (Derek Meyer) is involved in a half-dozen other Fringe shows with competing schedules at venues all over town and he’s stuck in transit.  Grudgingly, the two productions decide to share the stage and slowly start to realize if they play off of one another they can cover more ground - and maybe offer each other either a little more fun, or a little more prestige, depending on which way the wind is blowing in the plot at that particular moment.

Writers Aaron Greer, Ben Tallen and Brian Watson-Jones get the best of all worlds here.  They get to make fun of literature, movies, theater, their own old-school/modern classics mash-up strategy, and Fringe artists all at the same time.  Director Carin Bratlie Wethern and the entire ensemble are all enjoying the hell out of this concept.

“My evil’s starting to wear off.”

Mom was convinced that the audience the day we attended, like her, were mostly English majors because they were getting all the Beowulf jokes just as easily as the Road House jokes.  But you don’t need to have a working knowledge of either to enjoy the lunacy.  Mead Hall fills in all the blanks for the novice viewer.  It also offers added benefits for anyone more familiar with the source material (for instance, for those of you just waiting to see how they work the Road House line “I used to f**k guys like you in prison” into Beowulf, you will not be disappointed.)

“That name will remind us all that you’re more than just a love interest.”

Mead Hall is enjoyable no matter the direction from which you’re approaching it.  Great Fringe fare for one and all.