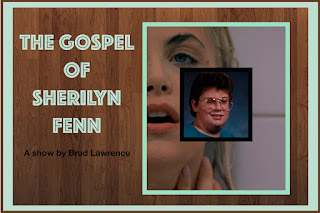 Brad Lawrence and The Gospel of Sherilyn Fenn were high on my top 10 list this year for a reason, all signs pointed to the fact that the guy was a consummate storyteller.  Seeing The Gospel of Sherilyn Fenn for myself was proof that everything people were saying about this guy was right.  It’s just him, and occasionally his bottle of water, onstage for an hour, and the man is absolutely mesmerizing.  Also hilarious and horrifying, but never less than absolutely compelling.  Once he starts talking, you can’t take your eyes off the guy.

“The God of youth group was Christopher Walken wearing George Burns as a skin suit.”

It helps that he’s got a hell of a story to tell, and knows just how to spin it.  It’s hard being a fat kid with glasses and a mullet in sixth grade.  Brad’s unexpected escape from social exile comes when he finds that he can draw sex acts and violence he doesn’t yet understand at the request of other kids who would otherwise be bullying him.  And he makes a little money at it, too, until the school administrators get wind of it and insist he get some therapeutic help.  Taking his art to the other extreme, he manages to garner some notice and awards on the Christian art circuit, which might even lead him to a scholarship at a conservative Christian college.

“I was years away from finding out how intimidating a naked woman could be.”

But when a troubled older relative ends up on his parent’s doorstep, Brad is suddenly confronted with the kind of access to pornography he always thought he wanted, but isn’t quite prepared for.  There are sudden turns in the tale I won’t spoil here.  And I have to say, even though Brad himself is no longer a believer the way his family brought him up to be, the depiction of conservative organized religion and the effect it has on a kid’s psyche is rich and multi-layered.

It’s not the knee-jerk, one note Christian-bashing we’ve come to expect from popular entertainment.  Just the sequence where people are praying over young Brad in a glass elevator at a Christian conference is amazing, and there’s more where that came from.  But Brad’s salvation, such as it is, comes ultimately from the unlikely source of adult TV late night on Showtime during the free summer preview period.  Brad’s outlook on life, religion, sex and his own body are completely transformed.  Thank you, Sherilyn Fenn.

You have to hear this man tell his story for yourself.  Fair warning: adult content.  But when people are talking about great solo shows, The Gospel of Sherilyn Fenn is the kind of show they mean.