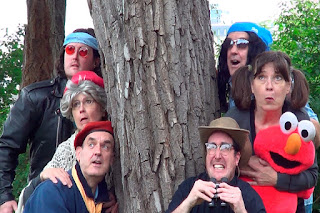 Tweet review - #mnfringe It Came From UUFO: Mom says not everything needs to be Shakespeare; she had fun,says it's a 5; split the difference - 4.5 stars

Mom had a ball at It Came From UUFO, and kept bringing it up to other people we met around the Fringe because she had such a good time.  When I didn’t immediately share her unbridled enthusiasm, she chided me with an “Oh come on, not everything needs to be Shakespeare.”  Which is true.  I normally stay away from Shakespeare at the Fringe.  I prefer new plays because the Fringe is such a vital showcase for new work and scrappy new theater companies.  And It Came From UUFO is a new play, from a scrappy theater company that’s as regular as the Fringe lottery ping pong balls will allow (past efforts include Fringe 2011’s Rambler Family Ramblers and 2012’s Shakespeare Ate My Brain).

“I love probing - the mysteries of the universe.”

We went because our friend Erin Denman is in the cast but Mom ended up loving everything about it.  It Came From UUFO is about the city of West Winsom’s 25th annual UUFO festival, celebrating the time five citizens were abducted by aliens - and four came back.  Four is a magic number here as the cast of four (Denman, along with Jeffery Goodson, Joe Hendren, and Cynthia Schreiner Smith) plays a multitude of roles, over 20 in all.  The set’s just a big banner behind which the actors rush to put on yet another costume, to emerge as yet another character.  At one point I lost track and could have sworn they had at least five actors, until curtain call proved me wrong.  Phew.

“Now you’re just being cruel.  You know I can’t spell.”

The script is peppered with countless pop culture references, most of them in the scifi/fantasy realm.  Hey, any script that drops a “Klaatu barada nikto” reference is OK in my book.  Creators Barry Shay and Patsy Puckett have managed to cram about as much content into a Fringe time slot as any person should be allowed to.  Blink and you miss it could apply to any number of jokes, characters or plot twists in UUFO.  But I’d rather a play try to do too much than too little, so have at it.  Really, half the fun is just watching the actors sprint through this thing.  There’s even a little low impact audience participation, with the requisite joke about alien probes, of course.

It Came From UUFO is a lark.  Approach it in that spirit, and you should have a lovely time.