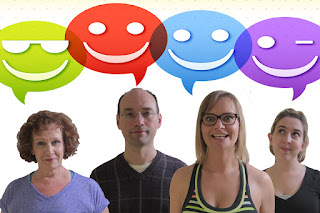 I know what you’re thinking.  How can he only give happiness 3 stars?  I’m sure this show will have its following.  But it’s not really theater so much as it’s a live-action infomercial for Tom Glaser’s book Full Heart Living.

Glaser interviewed people with perpetually sunny dispositions to see what their common strategies were for engaging life and embracing happiness (and bouncing back from misfortune).  It’s a self-help book.  It’s a self-help show.

The cast is mostly white and mostly female, as is the director Nicole Wilder.  The energetic ensemble (Lynn Maiers Paulson, Mykel Pennington, Patricia Reeves, Erica Szaflarski, and G. Zachariah White) bring the material to life with a lot of the strategies you might find in basic theater games.  The script is largely transposed from the book, and feels a lot in structure and delivery like any number of documentaries or infomercials that can be seen on the far edges of television programming schedules whenever they need to plug a hole with some content.  They even call the programs “participant guides.”

It’s exactly what it intends to be: an introduction to the book and its contents.  There’s nothing fundamentally wrong with it.  If you’re in the mood for a little positive thinking reinforcement, Full Heart Living LIVE! could be just the ticket for you.  It was a sold out crowd at the first performance and they were clearly there to buy what Glaser and company were selling.

But though it’s well-executed, I wouldn’t call it theater.  At least not the kind of live performance that I go to a theater to encounter.  Full Heart Living LIVE! The Boot Camp Experience could be a welcome change of pace or refuge for an hour for any number of people.  I personally just wasn’t clicking with the way the production wanted to engage me.  Look over the links and video they’ve got posted, and decide if it’s for you.