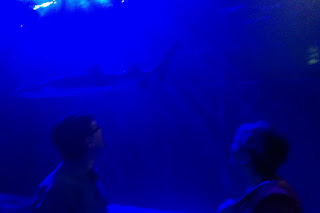 “Some people have less of an impact than others.”

A play made up of two interconnected monologues can be deathly dull in the wrong hands.  Here, not only the writer, but director Miriam Monasch, and performers Edward Linder and Stacey Poirier, really nail it.  It’s a perfect partnership.  Everyone’s bringing out the best in everybody else.  The staging is simple but incredibly effective.

Linder and Poirier portray characters on two sides of a marriage (also married offstage in real life, but thankfully with a lot less drama).  The time is late 2008, when the entire economy seemed to be spiraling down the toilet with no relief in sight.  Linder plays Greg, a numbers guy who came up with the perfect algorithm for a company wanting to downsize its workforce.  Now he and his formula are in high demand, but he’s more than a little uncomfortable with turmoil he’s unleashing on the lives and families of the working class.  Greg’s conscience prompts him to an act of rebellion that he may or may not end up regretting.  His churning intestines certainly have second thoughts.  Greg is seated on a plane, stuck on the tarmac for maintenance issues.  Trapped on either side of him are two women who really wish they could unhear a lot of what he’s saying, just making the whole thing that much funnier.  A phone call from Greg flips us over to his wife Michelle on the other end of the line (a simple and lovely transition).

“There is nothing more frustrating than not being heard.”

Poor Michelle is substitute teaching and thanks to Greg’s calls, among other things, hasn’t had time to read the lesson plan.  She finds herself in front of us, her class, tasked with a vocabulary lesson in words with Latin, Old English and Greek origins drawn from William Golding’s classic novel Lord of the Flies.  With each passing word, Michelle spirals from eye-rolling to anger to tears at an ever more alarming rate.  Her hilarious tangent into a one-person recap of Euripides’ The Bacchae is worth the price of admission all by itself.  I can’t remember I time when I’ve enjoyed Poirier’s acting this much.  Both she and Linder are enjoying the hell out of this play, and that enthusiasm is contagious.

“At that point I was longing for the face paint and the sharp sticks!”

Another thing I love about Bertram’s writing is that the details are all there for the actors and audience to find, but she doesn’t hit you over the head with them.  If you give the play half your attention, you’ll enjoy it on a basic entertainment level.  But if you listen more closely, so many seemingly disparate threads tie together is such satisfying ways, you come away from the play with a greater appreciation for everyone involved.  Saying this play is about two sides of a marriage is almost too simplistic, because it makes you think the play is all about the relationship.  That’s not the focus.  It’s about these two very different people, who they are, and what they’re bringing to the relationship.  What they are and aren’t getting out of it.  And what we as the audience see that they don’t.  If Michelle could see Greg on that plane, and if Greg could see Michelle in that classroom, they might be able to see their way to rebuilding their marriage.  As it is, they’re having one-sided conversations with themselves, unaware that the other person has a very different view of, say, how their daughter is being raised, and how that troubles them.

“Finding a responsible adult is a challenge.”

For Worse is hilarious, and sad, and lovely.  Great work by all involved.  You really should see it.