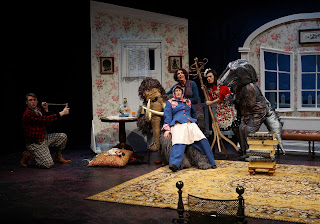 The world ended twice at Park Square Theatre the other night.  And each time right after it happened, the audience got up, took a restroom break and got refreshments before returning for the next act.  I’m a little worried about those people.

“The end of this play isn’t written yet.”

Girl Friday Productions and Park Square have teamed up to stage Thornton Wilder’s Pulitzer Prize-winning comedy The Skin of Our Teeth, and 75-plus years after it was originally written, it still has a lot to say for the turbulent, absurd times we live in these days.  It’s almost as if the playwright read this morning’s newspaper, and whipped up a play in response.  Wilder fervently believes in the human race, but that doesn’t mean things aren’t going to get a little rocky from time to time.  Though war and natural disasters keep popping up, humans are surprisingly resilient little buggers.

“We’ve always had two children, but it hasn’t been the same two.”

Mr. and Mrs. Antrobus (John Middleton, and Girl Friday Artistic Director Kirby Bennett), their two surviving children Gladys (Kathryn Fumie) and Henry (Neal Skoy), and their ambitious seductive housemaid Sabina (Alayne Hopkins) are the central characters in the troubled tale of the human race over thousands of years in New Jersey - a suburban New Jersey that nonetheless has a woolly mammoth and dinosaur as house pets, and is in imminent danger of being overrun by a glacier as part of an oncoming ice age in Act One; an Atlantic City full of partiers oblivious to a menacing wall of water in Act Two; and the remains of a family and their home after the ravages of war have swept over the country in Act Three.  And, again, this is a comedy.

“With the whole world to choose from, why did you come to this one place?”

Girl Friday is actually revisiting this script.  They first produced The Skin of Our Teeth back in 2009 (remember 2009?  Barack Obama was in his first term as president, we were living through the aftershocks of the 2008 economic recession, the Tea Party was making noise but hadn’t taken over Congress yet; wow, that all seems so quaint and placid now).  If there was ever a play that deserved dusting off again so it could hold up a funhouse mirror to bounce a reflection off our bewildering cycle of current events, it’s The Skin of Our Teeth.  The Skin of Our Teeth is both an escape and a reminder at the same time.  Teetering on the edge of the end of the world as a piece of entertainment isn’t an easy trick to pull off, but Wilder, Girl Friday, and Park Square make it look easy.

“If you’ve got any plans for improving this crazy old world, then I’m with you, I really am.”

Wilder’s script and Girl Friday are back again, as are Bennett, Hopkins, Middleton, and Girl Friday’s delightful character actor in residence Sam Landman, but a whole lot is different this time around.  Joel Sass is in the director’s chair, and also bringing his gifts as a set designer to create the look of this peculiar and funny world.  The cast before was, though also quite good, fairly monochromatic.  This time around we have a diverse cast with a number of actors of color.  The previous production was in the late lamented Theater Garage space (now you could stage act three in the hole in the ground where that brick building used to be).

“The sight of you dries up all my plans and hopes.”

The expansive proscenium space at Park Square, plus the room for action to roam across the front and up and down the aisles of the house (which it does), make the world of this play - and the disasters which threaten it - that much bigger (and more impressive).  This partnership also has the resources to deliver funny and unsettling video openers to the first and last acts, and pretty imposing walls of ice and water to consume the world at the end of acts one and two.  The design team of Michael P. Kittel (lights), Kathy Maxwell (video), C. Andrew Mayer (sound, and also video), and Maxwell Collyard (cinematographer) create some pretty fun special effects for a live theater setting.

“Here are your whales, Maggie.”

And the very different times we live in now, and the nine years of living that we’ve all done since this play was last before us, make one see the play with completely new eyes, and see new things in it.  Wilder was also pushing the boundaries of theatrical storytelling way back then in ways that we’ve come to expect from our storytellers now.  Rather than seeming old-fashioned or ahead of his time, Wilder feels like he’s writing for all of us right now - which is weird, and great.

“The earth’s getting so silly, no wonder the sun turns cold.”

Also great is the motley assortment of characters surrounding the Antrobus family, populating their repeatedly doomed and resurrected world: they all get to play clueless, hedonistic convention-goers in Atlantic City in act two, and many of them also play refugees from the Ice Age in act one, and throughout they take turns breaking the fourth wall to address the audience and/or call out the conventions of the play.  They all put costume designer Kathy Kohl and her assistant Mary Farrell through their paces coming up with colorful vibrant distinctive looks for all their many alter egos across the centuries.

“Again, there will be a narrow escape.”

Girl Friday regular Landman gets a fun turn in as a long-suffering stage manager who tries in vain to corral Sabina when Hopkins breaks character to rail against the playwright.  Dana Lee Thompson is a standout as a humorously apocalyptic fortune teller.  Taj Ruler gets a lot of mileage out of her different characters and looks as a singing telegram delivery person, an ancient bearded conventioneer, and boom mic operator.  Wendy Freshman and Corey Fern get to team up with Ruler’s boom mic as interviewer and cameraman, respectively, for a deeply awkward interview and family meltdown.  James Ramlet and Victoria Pyan run Atlantic City as dueling announcers at the convention (Pyan also gets to be the woolly mammoth, which is probably a sweltering costume for her, but fun for us to watch).  Ernest Briggs is the voice of the news reel on the front end of the show, and fictional head of the ushers who gets drafted into service when half the cast for act three goes down with food poisoning.  Pedro Juan Fonseca gets to be both lifeguard and dinosaur, so he can check both of those off on his resume.  Also in the mix as part of the ensemble are Ellen DeYoung, Alice McGlave, and Mike Swan.

“All these things will be forgotten in a hundred years.”

Since The Skin of Our Teeth is both timely and timeless, and the times are very different now, returning leads Bennett, Hopkins and Middleton all breathe new life and nuance into roles they’ve played before.  And Skoy and Fumie may be new as the children this time around, but they fit in seamlessly with the returning vets of the central family household.  Fumie goes from being daddy’s little girl in act one, to the mother of a new postwar generation in act three.  Skoy travels a similar long distance, his boyish violence in the first two acts blossoming into a war that consumes a country for the final act.  Middleton’s father of invention finds the most difficult role being that of father to his own troubled children.  Hopkins crossing in and out of the play as Sabina could be confusing or unconvincing, but in her skillful hands, the character helps the audience navigate through the epic twists and turns of the comedy.  And as the homemaker at the center of it all, whose home and family keep getting torpedoed by time and other forces beyond her control, Bennett grounds the story, and pulls everyone back from going over the edge.  Mrs. Antrobus is always ready to rebuild, and never considers giving up.

“The whole world’s at sixes and sevens.”

I was, to be honest, a little leery of sitting through a three act play (it’s been a while), but each act hums right along, only about 45 minutes apiece - and you need a full intermission to rebuild the world (twice).  The whole thing only clocks in a little over two and a half hours.  Most plays that are only two acts (and only half as entertaining) take that long.  It was a full evening, but it never felt long to me.  So kudos to everyone involved for keeping the thing moving, but not so fast that I couldn’t keep up.  (That’s a shout-out to the actual real life stage manager Penny Laden Kissinger and her crew, too.  The Skin of Our Teeth has a lot of moving parts to it.  It’s hard to keep a production this size running this smoothly.)

So if you want to get away for a couple of hours, and get a little useful perspective along with your laughs, I think you should check out The Skin of Our Teeth.  It’s playing over at Park Square through March 3, 2019.  Or the end of the world.  Whichever comes first.