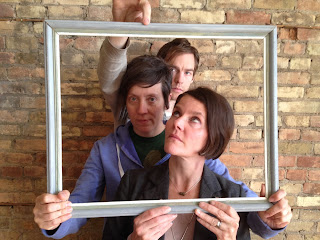 Skewed Visions seems to delight in making my job as a reviewer harder, and I have to say I’m thankful for that.  Few theater artists tend to twist my view around about what it means to be an audience member quite the way Charles Campbell and his collaborators do.  The other thing that is frankly a genuine relief these days - given the state of art and the world in general - is that the Skewed Visions’ mission seems to be in part to bring not just humor, but gentleness and whimsy and a much absent feeling of fondness for the human race.  Not to feel like you’re escaping so much as being reminded, yeah, people aren’t all bad.  Just to be able to be amused without turning off one’s brain, to feel better about people and life and not just a little more hopeless, that’s a gift.  Skewed Visions offers it generously, here again in their latest piece, Losing Kantor.

“My last advice: remember everything and forget everything…”

The making my job harder part is the prism through which you are asked to view Losing Kantor.  When you arrive you are given a cardboard object about as long as your arm.  This object is a tiny forced perspective hallway, complete with a couple of window openings and a tiny door at the end.  You look through it from the large end (there are even tiny flaps to accommodate those of us with glasses), out through the tiny doorway (sort of like looking backwards through a telescope).  Then Charles Campbell and his fellow performers Annie Enneking, Megan Mayer and Billy Mullaney present Losing Kantor in much the way Skewed Vision would present anything other piece.  But you’re watching it through a tiny portal.  You can get a tiny bit of peripheral visual by looking out the little window or pulling back a bit and letting your eyes see past the flaps.  But basically you need to decide how you’re going to watch the piece.  Follow the noises, focus on faces or hands, random props, or something on the opposite end of the room just for fun.

“In the end, nothing is less personal than the face, and this lack is everywhere avenged.”

Some audience members choose to watch “traditionally” without the cardboard gizmo and I’m sure it’s equally fun to watch that way.  The audience I was part of was game to keep their big cardboard snouts on their faces the whole time.  It, of course, made it impossible for me to take any notes, so I had to scurry home and type some quick thoughts from memory.  But the trade off was worth it.  You have to hold the cardboard hallway up, there’s no straps to hold it in place for you.  As a result, that effort, plus the constant need to decide “where am I going to look now?” keeps you fully alert, engaged with the piece, and aware of your own body.  It’s a challenging but rewarding viewing experience.  Someone should take a picture of all of this from the outside, these big-beaked people/birds watching other humans put on a play in front of them.  When they offer you a “facial corridor vision machine” on your arrival, take one and stick with it.

“…poor fragments of my own life will become ‘ready-made objects’.”

What are you watching?  First of all, any soundtrack that includes Elvis Costello, Bach, Drowning Pool, Chopin and Chicago is OK in my book.  The Chicago track “Hard To Say I’m Sorry” is particularly fun because it’s playing over the cast getting in a slowly escalating slap fight while looking at frames on a gallery wall, with some additional enthusiastic lip sync performance toward the end by Mayer.

“They would emerge and keep returning stubbornly, as if waiting for my permission to let them enter.”

All the segments of the evening (lasting a little over an hour), have their inspiration in the work of visual artist and theater director Tadeusz Kantor.  Do you need to be familiar with Kantor or his work to “get” or enjoy the evening?  Nope.  I can say this because I went in with zero knowledge (yes, I admit the gap in my education).  I am aware now, though, of how a lot of Campbell’s work is filled with echoes of Kantor.  A little post-show research now means I’ll recognize the fingerprints when I see them in the future.

“The weak walls of our ROOM, of our everyday or linear time, will not save us…”

There’s an obsession with chairs - and people struggling physically with chairs in oddball ways (the opening sequence finds each of the performers struggling to enter the Fresh Oysters Performance Research space and walk across the room, all the while being entangled somehow in a chair).  There are people bundled up in coats.  There is the use of physical frames to try and frame the way the audience chooses to look at or remember an image onstage.  There are soldiers.  There are bodies dragged away.  There are people pretending to be revving up a race car.  There are people getting completely wrapped up in brown paper and then slowly breaking free.  There are people engaging with parts of mannequins as stage partners.  There’s a moment when that slap fight turns into just people lying next to each other on the floor, looking up at what would be the sky and the stars.

“…when we want to shelter and protect, to preserve, to escape the passage of time.”

Each time a sequence is completed or an image is “framed,” that frame is then hung on the wall.  At one point when the wall is full of frames, each performer takes a frame off the wall and steps through it.  Mullaney gets the smallest of the frames and, contortionist that he is, he manages to get himself through it in a way that doesn’t seem quite possible.  The frames also get draped with black fabric at one point.  At another junction, an even larger frame is placed around all of them.

“…behind the doors, a storm and an inferno rage, and the waters of the flood rise.”

Losing Kantor is an intriguing set of moments and images strung together and focused through your own cardboard set of blinders.  It’ll make you think differently about theater, and about being an audience member.  And it’s, strangely, not the least bit weird or taxing.  It’s actually quite refreshing and reinvigorating.  I’m not saying you should watch all theater through a cardboard tube.  But doing it once or twice is actually a lot of fun. (playing through October 22, 2016)