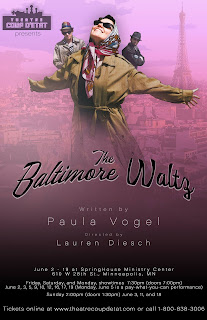 I will admit that Paula Vogel’s The Baltimore Waltz makes me nervous.  I keep expecting that eventually I will encounter it and it will seem dated or unsatisfying in some way, and that would make me sad.  But it’s Paula Vogel.  I should know better.  Theatre Coup d’Etat’s fantastic, funny and heartbreaking production of The Baltimore Waltz may have finally put my fears to rest.  The play is, if possible, even more bracing and lovely than when I’d previously experienced it (third time’s the charm, I guess).  Anyone encountering this play for the first time with Theatre Coup d’Etat, like the friend who came to the show with me last weekend, is getting the best of all possible worlds.  If you’ve never seen it, go.  If you’ve seen it before, go.  Just go.

“Elisabeth Kubler-Ross can sit on my face.”

Paula Vogel wrote the play as a love letter to her late brother, Carl.  His delightfully inappropriate letter to her about his own funeral arrangements is included in the program (with the blessing and encouragement of the playwright). In 1986, Carl asked Paula to go with him on a joint trip to Europe.  The pressures of life kept her from saying yes.  At the time, she didn’t know he was HIV+.  They never went.  By the early days of January 1988, he was gone.

“Some things are the same in every country.”

So The Baltimore Waltz is Vogel’s fanciful imagination of a journey never taken by a brother and sister.  In the play, it is the sister who is sick, infected with the virus for ATD - Acquired Toilet Disease - which, as an elementary school teacher, she picked up from a kindergarten classroom toilet seat. So it’s off on a whirlwind tour of Europe for Anna (Kari Nielsen) and Carl (Nicholas Kaspari). Anna, feeling shortchanged by living the life of a good girl, has decided to throw caution to the winds and screw her brains out, accosting pretty much anything in pants.

“He never betrayed you.  He taught you to trust in contact.”

(She doesn’t say screw - [he types, blushing].  I have rarely been more aware of the salty language in this script than I have been seeing it at Springhouse Ministries in one of their sanctuaries.  There is an enormous artful metallic cross suspended above the center of the room (and the set).  And whenever there’s a blackout, long summer days being what they are, high above in the dark, the waning sunlight shines through a stained glass window of a praying Jesus.  Vogel’s often poetic, sometimes profane, use of language is on a different kind of display in this context.  Kudos to Springhouse for giving this play a home anyway, and for Coup d’Etat for not sanding off the play’s rough edges to “fit” the venue.)

“Only the Germans have a word for that.”

“It’s the language that terrifies me.”

Dooley may have flashiest of the three roles, since he gets to rip through one wacky character after another, but Kaspari and Nielsen ground his zaniness with the truth of their fractious but loving brother/sister bond, and the reality of facing Anna’s illness with their own agendas.  Director Lauren Diesch embraces not only the comedy and the sorrow that buffet the play (often both in the same moments), but also expands on the dance that concludes the story to incorporate movement at key moments throughout, to match the poetry of the script.  She not only gets great performances from her actors, she’s assembled a design team that really delivers on the concept of the play.

“If you want to be a billionaire, you sell hope.”

Megan Kedrowski’s set centers around an enormous curtained hospital area (complete with red plastic hazardous waste bags to anchor the framework to the floor) which is revealed and obscured in a variety of ways throughout.  The only piece of furniture - a hospital gurney.  We are never far from the medical impetus of the European odyssey, but the set-up is used in so many different ways, you can almost forget what it is, until you can’t anymore.  The curtains memorably partner up with lights (by Mark Kieffer) in a shadow play series of sexual positions for Anna and her various partners, and also for vacation slides that take on the look and feel of the X-rays with which they are interspersed.  Lights and sound (by Phillip Uttech) partner up to make the multiple changes in time and place, not to mention reality, distinct and easy to follow.  The Baltimore Waltz takes you on a journey, even though you never leave the simple square space of hardwood floor in the sanctuary.  One tiny detail that just knocked me out in Katie Martin’s costume design was her pairing of the pink triangle that the script features in Carl’s introduction, with a striped button down shirt in muted colors that, if you looked at it sideways, was just this side of a concentration camp uniform for gay men in Nazi Germany.  Carl with that look, on a European trip, a subtle but scary nod to the holocaust that came forty years before the AIDS crisis. (Given what’s going on in Chechnya right now, plus our Vice President who as governor of Indiana wanted to redirect AIDS treatment and prevention funding to gay conversion therapy… there’s still work to do.)

“He’s flashing his rabbit at you.”

And here’s where I’m especially glad Theatre Coup d’Etat gave me a chance to experience this play again now.  The first time I saw The Baltimore Waltz, the play was fairly new, the AIDS crisis in full bloom, and honestly, everyone who saw it was probably a little stunned and numb to it all.  The sister and not the gay brother being sick was a “nice” thought, but reality was always ready to reassert itself in our minds.  (The friend who attended this latest production with me - heck, most of the people involved in the production this time, probably weren’t even born - or were just toddlers -  when I first saw The Baltimore Waltz.  That’s an odd thing to consider. I'm grateful these folks will probably never see first hand the human body ravaged by the illness unchecked. It's not something that leaves you.)

“I just wish you wouldn’t go.”

“Cut down in the prime of youth by a toilet seat.”

Only the end of the world is the end of the world.  Everything else, we can manage.  Hold your loved ones close.  Spend time with them.  Go on that trip.  No time is the right time.  But at some point, it’s too late.  Don’t miss your chance.  That’s the gift of Paula Vogel in The Baltimore Waltz.  And that’s the gift Theatre Coup d’Etat offers in resurrecting this script in this moment.

(runs through June 19, 2017 at Springhouse Ministries)