Review - My Barking Dog - Market Garden Theatre - A Coyote Takes Over Two People’s Lives, and Then A City - 5 stars 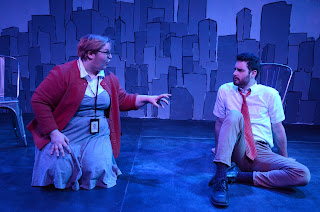 The “why” of a play can often elude me.  There are thousands of plays out there - old and new, from any number of countries or periods of history.  Why a theater company chooses to do a particular play right now, that can be a useful thing to know.  Sometimes it’s obvious.  Sometimes it’s a complete mystery.  Sometimes, you have to think for a minute.

“Maybe this disemboweled squirrel is your engagement ring.”

With Market Garden Theatre’s production of Eric Coble’s play My Barking Dog, it took me a minute.  Because I had to remember, “Oh, right.  We haven’t always lived like this.  It won’t always be like this.”  We used to live in a country where serious people were trying to address large, systemic problems like criminal justice reform, and climate change, and voter suppression, and community policing.  Now every day we either start off with the thought, “what crazy, corrupt thing did they do overnight while I was asleep?” or “you know, just wake me again when this nonsense is over.”  Because the world doesn’t revolve around Washington, DC.  It keeps moving and changing whether we’re keeping an eye on it or not, whether we’re doing anything about it or not.  So the intriguing issues at the heart of the play My Barking Dog will still need addressing, when the current political storms have passed.  My Barking Dog is actually a great reminder that there’s a wider world out there, if we’re paying attention.

Eric Coble’s 90-minute play starts off as two dueling monologues.  The characters actually don’t speak to each other and share a scene until 30 minutes in.  After that, they still have their moments alone, but My Barking Dog then becomes a shared story.  The whole thing wouldn’t work nearly as well if director Lucas Skjaret hadn’t chosen the two actors he did to tell the story.  Victoria Pyan portrays Melinda, who works for a printing company, loading the paper into the machines, more than happy to take night shifts and holidays and have the factory all to herself.  Mike Swan portrays Toby, who is currently unemployed and searching for work - except it’s the “white privilege” version of unemployed where he still has the resources somehow to continue to rent an apartment and feed himself while he hijacks his neighbors’ wi-fi signals for internet access.  Just as I’m starting to wonder how much longer I’m going to remain interested in these isolated people, no matter how clever the script or compelling the performances, a coyote appears.

We never see the coyote, but the unseen animal is always clearly visible to the human characters on stage.  They follow it with their eyes.  They communicate with it.  They leave food out for it.  Then things get weird.  Seriously weird.  Spoiler alert weird, so I won’t go into too much detail except to say that the coyote brings Melinda and Toby together (no, not that way) and gives them each a new mission in life.  Neither of these missions are expected - or even in the mainstream of human thought.  In fact, they’re both in their own way kind of nuts, and yet they’re also both interesting as hell to watch unfold.  Essentially, My Barking Dog is asking the question, are the coyotes, and nature in general, encroaching on human cities - or are humans the interlopers, and the animals are just taking back what’s theirs?  If it’s the latter, how much should humans be fighting the animals?  And should they instead be helping them?

“Nothing prepares the earth for new life like a layer of ash.”

My Barking Dog is a surprisingly simple production.  It’s just the two actors, and for Leazah Behrens’ scene design, a couple of silver chairs, and a painting of a cityscape on the wall of the space.  Lighting designer Jacob Lee Hofer does some of the heavy lifting of defining areas and setting time and place.  There are no props to speak of, just a lot of convincing miming of items and tasks.  That puts the focus on things like costumes, as layers start to come off, and the use of colored chalk on the floor in the final thirty minutes.  The blue chalk lines not only cover the floor, and scrawl graffiti across the cityscape, the chalk dust quickly starts to cover the clothing and skin of the characters.  The production is in the studio space at the Crane Theater which, six months on, still has a lot of the same sound bleed problems it did back when I saw Sing To Me Now last fall.  Their opening weekend has competition from another show across the hall on the main stage; the next week, they have the theater to themselves.  Until then, it’s hard to really hear and appreciate the full sound design created by Kassia Lisinski.  What I could hear was helpful to the story.

“It might not all be accurate but it’s all true.”

Market Garden Theatre is doing a bit of public service with My Barking Dog.  As surreal as the story is, they manage to tell the story in a way that gets the audience to plug back into the concerns of what the world was once like, and fortunes willing, will be again.  Wonder what it’s like surrendering to or collaborating with nature?  My Barking Dog will have you thinking about it in ways you never expected.  (plays through April 29, 2018)