Review - The Cradle Will Rock - Frank Theatre - I Want To Believe, I Really Do - 4.5 stars 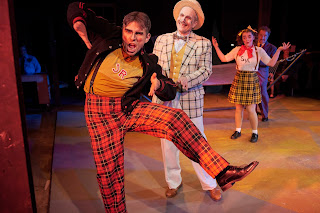 It’s hard to think of a more perfect match of theater and material than Frank Theatre and their remount of the 1930s pro-union musical The Cradle Will Rock.  Musical theater as a genre isn’t the first thing that would spring to my mind as a good fit for Frank, but The Cradle Will Rock is pretty much tailor-made for Frank Theatre’s brand of brazen political theatricality.  Writer/composer Marc Blitzstein’s self-described “play with music,” born out of the Depression era WPA’s Federal Theater project, is more a product of the rhythm of words than catchy melodies.  It’s challenging material, but director Wendy Knox, musical director (and accompanist) Sonja Thompson, and their talented ensemble is more than up to the task.

“You have no idea how it felt thinking there was a nickel under my foot.”

Set in a down on its luck Steeltown USA on the night of a big union vote by the steelworkers and other factory employees, the police are rounding up anyone who looks like potential trouble.  Mr. Mister (John Cutler), the big businessman in town, is trying to keep the workers from combining their collective power into a union that would challenge his control over them.  So he’s used his influence over the cops to try and break up any gatherings of people.  The sweep misfires, however, and scoops up the newly formed Liberty Committee of influential citizens who are already very much under Mr. Mister’s sway.  They had gathered to disrupt the union organizer’s speech and ended up in jail instead.

“I belong with those people.  I sold out, too.  I sold out my boy, and two others with him.”

The union organizer, Larry Foreman (Carl Schoenborn), is getting a very thorough interrogation himself.  Meanwhile, a part-time streetwalker Moll (Kate Beahen), who sells her body so she can eat on the days her regular part-time job isn’t earning her money for food, is also in a holding cell.  She finds herself sharing a bench with Harry Druggist (JP Fitzgibbons), a pharmacist who’s turned to the bottle after losing both his drug store and his son Stevie (David Wasserman) in the same horrible accident.

“Where is the man who made the speech?!”

Harry recounts for Moll all the many stories that prove each member of the supposedly upstanding Liberty Committee has prostituted themselves far more that Moll ever has.  The man they all sacrificed their virtues to was Mr. Mister, or a member of his extended wealthy family - wife Mrs. Mister (Molly Sue McDonald), and their children Junior Mister (Sasha Andreev) and Sister Mister (Chelsie Newhard).  The good Reverend Salvation (Joe Nathan Thomas) is persuaded by generous donations to preach either against or in favor of going to war, depending on what’s good for business.  Newspaper Editor Daily (Bob Beverage) provides favorable news coverage to the paper’s new owner Mr. Mister, as well as getting Junior out of town on assignment.  Dr. Specialist (also Sasha Andreev) doctors some medical reports as necessary for various cover-ups.  Artists in search of a patron, Dauber (Hector Chavarria) and Yasha (Scotty Reynolds), suffer the attentions (and artistic pretensions) of the rich in order to get their cash.  And college President Prexy (Gillian Constable) finds a suitable academic shill for Mr. Mister’s pet causes in order to secure funds for education.  (The ensemble of cops, reporters and other citizens is rounded out by Maria Asp, Thalia Kostman, Cameron Reeves and Allison Witham.)

“It seems that peace may be a little expensive.”

And, mind you, these flashbacks and present day unrest all take place through singing.  Which is nuts, and kind of dazzling to watch them all pull off in just 90 minutes.  The one real challenge of the piece is its allegorical nature.  You can tell by the names of characters above that everyone’s an archetype.  They’re not quite real people.  Blitzstein isn’t interested in exploring the depths of psychological realism.  He doesn’t care how these people got to be who they are, they just are.  This is the mess that Steeltown, USA is in - now what are we going to do to fix it?  That’s what matters.  So on some level you have to find a way to force yourself to care about these characters, because they’re not going to meet you halfway and try to invite your sympathy and attention.

This alien, not quite human quality is reinforced by the design.  Kathy Kohl’s costumes set the period, and allow for quick changes for those playing multiple roles, including the full ensemble in the rousing final number.  But nearly everyone in the cast, particularly the well-to-do “higher class” characters sport facial makeup that is severe and deliberately almost clownish in design.  The working class, down on their luck types are allowed a more human aspect.  While it’s a useful way to distinguish the two classes, I wonder if it undercuts part of the point of the play.

“Union trouble ain’t no news in this burg.”

If your villains are so cartoonish they don’t seem real, doesn’t that let the rest of humanity off the hook a little too easily.  The monsters here are human.  Yes, the seduction of money turns them into something less than civilized, but it’s harder to put ourselves in their place, it’s harder to acknowledge the danger of being lured into apathy, compromise, or self-interest ourselves, if we can’t see ourselves in the full cast of characters.  It might be stacking the deck even more on one side of the argument than Blitzstein already does in the text/lyrics.  Certainly the actors all inject humanity into their characters as much as possible.  But on the one hand, the script is fighting them, and it’s hard not to play into stereotypes when you’re outfitted that way.  I have to hand it to the Frank creative team for going for it, fully embracing Blitzstein’s vision.  But part of me wonders if they should have fought him, just a little bit.

“They won’t pay us for our bodies so we’ll sell out in some other way.”

Frank Theater mounted Cradle once before, in 2003.  George W. Bush was in his first term.  The Afghanistan and Iraq Wars had just started.  Barack Obama hadn’t made that big speech at the Democratic National Convention yet.  The 2008 recession was still a few years off.  And we didn’t have our current president.  So, this production is definitely taking place in a radically different context, with a different resonance.  Corruption and wars have certainly always been with us in one form or another.  We’ve always needed people to band together for the greater good, pushing back against the negative actors of the world.  There’s a reason big business (and corrupt government officials) spend so much time and money trying to break workers’ unions.  Unions are the most powerful tool the working person has to take back power and fight for a better life, for all of us.  The fascinating thing about The Cradle Will Rock is that even though it’s very clear-eyed about the rot at the center of society’s ills, it still fervently believes that people with good intentions can beat back the darkness and build a better world, no matter how dark that darkness gets.  In 90 minutes of singing, they almost make me believe that, too.  I want to believe.  I really do.

“When the wind blows, the cradle will rock.”

If you need a jolt of righteous anger bound up with relentless optimism in its closing number, The Cradle Will Rock is just as perfect a piece of theater for you as it is for the folks at Frank.  You should treat yourself.  Frank Theatre presents The Cradle Will Rock at the Gremlin Theater space, now through April 7, 2019.