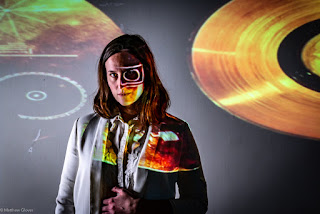 In 1977, NASA launched the two Voyager spacecraft off toward the far reaches of outer space.  On board each Voyager was a record player and two golden records (one with visual instructions on how to the play the other, full of the sounds of the different peoples of Earth).  This was our “hello” to any alien race who might find it and perhaps, by extension, us.  Those two spacecraft are still out there, somewhere, today.  42 years later, in a little storefront space beyond uptown in Minneapolis, Minnesota, in the United States of America on planet Earth, Sandbox Theatre called a group of visual, musical and performing artists together to ponder what it all means in The Golden Record Project.  That hopeful gesture by NASA has spawned an equally hopeful piece of theater, and you gotta be grateful for some hope wherever you find it.

You don’t need to know anything about the Golden Records in order to enjoy the project.  The Sandbox studio space provides all the context you need to play along.  It’s sort of part theater, part dance, part art exhibit, part audio visual trip down memory lane.  All the artists involved in The Golden Record Project unabashedly geek out on the subject while also making it clear they understand (a little sheepishly) just how much they’re geeking out about it.  Which just makes the whole thing seem that much more charming and sweet, and draws you in that much deeper.

Company members in white lab coats greet you at the door to what has been renamed the Standish-Ericsson Golden Record Preservation Society of the Twin Cities and Greater Metro Area (or S.E.G.R.P.S.T.C.G.M.A.) Museum.  You are provided a lanyard with numbered badge (which will become important later) and allowed to wander anywhere that isn’t curtained off as you await the start of the tour/show.  There’s a lot to see, and they give you time, but I’d urge you to budget yourself some extra time before and after the show to look around and interact with the exhibits.  There’s much fun to be had.  For example, there’s art on the walls inspired by the Golden Records.  There’s also an iPod playing the full contents of the Golden Records which you can listen to on a number of old school headphones hanging nearby - feel free to flip through the tracks to get a sense of the scope of the sounds shared.  Along one of the walls is a rendering of the solar system to give a sense of scale to the first part of the Voyagers’ journey.  Models of the spacecraft hang in various spots throughout the space.

In the spirit of celebrating 20th century technology, there’s lots of old school tech to play with as you ingest information about the NASA project.  A slide carousel and projection box, which you operate manually by pushing a button to advance the slides, provides a visual history of space travel, with accompanying music and narration on a cassette tape recorder with headphones sitting next to the projector.  A VCR plays a video cassette with a message (recorded over an old episode of Oprah’s talk show) from NASA interns making the case for different musical tastes in compiling the golden records - where was Fleetwood Mac’s Rumors or Stevie Wonder’s Songs In the Key of Life?  Helpful instructions for operation are affixed to clipboards, for those who haven’t used a VCR or slide projector in a while.  More 21st century-style screens provide a video tribute to Carl Sagan - the noted astronomer who helped lead the project for NASA, and a primer to put both the vast stretches of distance and time involved in the Voyagers’ journey in a more understandable (and amusing) context.

Around the corner from the Carl Sagan Memorial Hallway, is a room that is outfitted more like an alien spaceship.  Inside are more exhibits, including an animated depiction of the Voyagers’ journey from Earth through the rest of our solar system and on out into deep space.  There’s also a Carl Sagan kit in the form of a briefcase which you are encouraged to root around in - peruse the items inside, and the contents of the folders and envelopes within.  Not wanting to provide too many spoilers, I’ll just say if you search, there’s a little green man hiding in that briefcase who is quite adorable and made me chuckle.

Since there’s an opening, you can walk around the curtain separating the alien spaceship area from the final space at the back, a 1970s style room (complete with lava lamp) with lots of spaces to sit and lounge around (and more unusual books and such to take a peek at).  During the pre-show time, you have the benefit of Theo Langason on guitar, singing his own compositions, and he can be heard throughout the “museum” so it makes for a nice atmosphere as people wander.  And this is all *before* the “show” part of the evening kicks in.

After everyone gets at least a little bit of time to wander, a tour guide (Elizabeth Horab) gathers everyone in the entryway for a quick overview (about which she’s very enthusiastic).  While this is going on, the rest of the team is preparing the studio behind us for the performance part of the evening.  The attendees are then split into two groups, based on their badges, and ushered to their assigned seats in either the alien or the 1970s area.  There are projections on the curtain between the two areas - of shadow, video and pictures - which both “rooms” can see.  The action trades back and forth between the two areas, but even if the 1970s crowd can’t see the action being performed for the alien crowd next door, they can hear it, and vice versa.  You might think such a setup would be frustrating or confusing, but the overall setting is so intimate, and everything is so clearly heard, that it works quite well.  If anything, it makes you pay closer attention, and appreciate the little details you might otherwise miss.

In the 1970s, the Golden Record project’s other leader, Ann Druyan (McKenna Kelly-Eiding) is pitching the idea to NASA scientists and seeing it through to its fruition.  In the alien environment, a cosmic junk collector named Kar-El (Ajuawak Kapashesit), who has his own interstellar YouTube-style video channel, comes into possession of the Golden Records but has no idea at first what they are or what to do with them.  Druyan’s planning of the project vs. Kar-El’s perception of the project’s end result make for some amusing moments of miscommunication.  Even when Kar-El discovers how to listen to the record, his interpretation of the contents don’t always match up with Druyan’s intent.  There are interludes where our tour guide returns, and also a lovely moment where the curtain between the spaces goes away, and there is a kind of contact across space and time.

Project lead Kristina Fjellman and director Peter Heeringa have assembled a team of collaborators who together create a delightfully immersive environment for The Golden Record Project.  The audience gets to spend just enough time taking in the full scope of the Voyager experiment that when the performance begins and takes it down to a more individual, human (alien) level, we don’t forget the larger universe in which it exists.  In addition to the musician and performers, there’s also a team of fabrication/installation people (Nicole DelPIzzo, Holly Streekstra), one on fabrication and costumes (Mandi Johnson - and if it’s the 1970s, there must be macrame involved), four more billed as creation assistants (Evelyn Digirolamo, Megan Lagas, Henry (Hal) Ellen Sansone, and Heather Stone), and one on audio/installation (Morgan Schoonover).  It’s easy to see the large team at work here, because every station throughout the museum is carefully crafted.  There’s so much detail, in fact, that you’d be hard-pressed to process it all in a single sitting.  Which is kind of the point.  Sandbox wants to incite your curiosity on the subject, since there’s so much more out there to learn, and ponder.

And part of the larger question is not just how our world has changed in those forty-plus years that the Voyagers have been hurtling through space but, if we did something like this again, what would we send?  What would be the representative sights and sounds we would use to sum up our lives and our world today?  Could we be as hopeful?  Could we find that common purpose, that unified voice?  What would it say? What would we want other planets to hear about Earth?  (If you’ve got an idea, the Standish-Ericsson Golden Record Preservation Society of the Twin Cities and Greater Metro Area  would love to hear it.  They have a number you can call (612-234-2402) and contribute to their new time capsule by recording your own message for the universe.)

Sandbox Theatre’s The Golden Record Project is a great way to get your head out of the day to day minutiae and small-minded concerns and really think bigger - like, “the entire universe and our place in it” bigger.  And it really does leave you strangely hopeful, that such things happened, and are still happening, and could happen again.  The Golden Record Project is an intimate, finely crafted, escape.  It has all the trappings of some strange hybrid, but it really does what theater does at its best, create a new world and put you right in the middle of it.

The intimacy means it may be hard to get a ticket - they only take in 12 audience members per show (and some are already sold out), but I’d strongly urge people to try and get one of those spots in the remaining performances.  If you need a little hope right now (and don’t we all?), The Golden Record Project really delivers.  You’ll feel a little better about being a human, and about our chances for surviving.  (Running now through May 4, 2019, at the Sandbox Theater studio space)