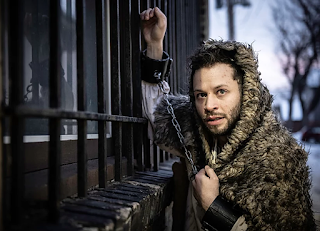 It’s a shame that current events are, quite understandably, making people skittish about going out to the theater - assuming of course that whatever theater you were planning on attending hasn’t already canceled their performances.  Because there is, or has been, a lot of really good theater going on lately.  One example, Sueno from Pangea World Theater that was, perhaps still is, playing at the Lab Theater in the Warehouse district of Minneapolis.

“Isn’t it interesting that the prophets of doom are never wrong?”

Sueno is the translation/adaptation by award-winning playwright Jose Rivera (Marisol) of Pedro Calderon de la Barca’s classic 17th Spanish play Life Is A Dream (of which I vaguely recall seeing in a production of the original back in grad school - the only things I remember being the title and the fact that the set designer went crazy in a good way with multiple vividly colored doors in frames rolling around on wheels - coincidentally enough, a lot of things rolling around on wheels in this production as well).

“You speak well.  That’s a dangerous quality for a man of action.”

The king of Spain, Basillio, (Pedro Bayon) gets a lot of bad news all at once.  His wife dies in childbirth and the horoscope for his son predicts nothing good for the king is on the way.  So he ships the infant off to a prison hidden in the side of a rocky cliff face to grow up far away from the royal court where he can hopefully do less harm.  A hard life doesn’t do wonders for the people skills of the young prince, Segismundo (Fernando Collado).  The king’s right hand man, and the prince’s jailer, Clotaldo (Ernest Briggs), keeps an eye on things.  But of course the guy is destined to get out of prison at some point.  Just as Segismundo emerges, he crosses paths with Rosaura (Ankita Ashrit) - disguised as a man for safety in her travels (she’s on a mission) - and her trusty sidekick Clarin (Adlyn Carreras, in a clever bit of gender-blind casting).

“Life is borrowed, and it must be returned.”

The king decides to give the prince a test drive at court, see if his son can behave himself after all.  And if it doesn’t work out, they can always just ship him back to his prison and lock him up again, gaslighting him into thinking it was all a dream and he was never really a prince after all.  Elsewhere in the royal court, the visiting Duke of Warsaw, Astolfo (Nicholas Sullivan) is playing politics for both power, and with luck, a mutually beneficial union in marriage with the princess Estrella (Katia Cardenas).  Rounding out the ensemble are Amarkirat Singh and Keila Anali Saucedo, playing supporting roles in skirmishes both political and literal, out on the field of battle.  Before we’re done, no one’s entirely sure what reality they’re living in, and quite a few battles large and small are settled in unexpected ways.

Rivera’s poetic and sexy way with words is the big draw here and the actors who fare the best make the most of this juicy playing material.  Director Leslie Ishii (along with assistant director Sir Curtis Kirby III) get sometimes mixed results from the ensemble.  Three key performers - Fernando Collado as Segismundo, Ankita Ashrit as Rosaura, and Ernest Briggs as Clotaldo - all fully engage with the reality of this fantasy world/dark fairy tale and even though the situations are outrageous, they’re always three-dimensionally human within it, so we believe.  We have anchors we can follow.  Collado’s Segismundo is a deeply flawed leading man to have at the center of a story, but over time even he gets that.  He may not be redeemed or forgiven, but by the end he is not the man he was and that’s a good thing.  Ahrit’s Rosaura is the rare woman in the world of this play who is not just an object or a victim, and her portrayal takes things one step further, making her an active participant, driving the action, even though her society is designed to rein her in.  Briggs’ Clotaldo, because of his stage presence as an actor, always seems more important than the plot sometimes makes him appear.  There’s always something going on under the surface of his lines and behind his eyes that’s compelling you as an audience member to pay attention.  In the end, he turns out to be just as pivotal as you suspect, just in a manner you had no way of guessing.

“I know my pain would be a joy to you and you’d wear it gladly.”

And as much as the clowns of these old stories sometimes grate on my nerves, I have to admit that Adlyn Carreras as Clarin avoids most of the pitfalls that kind of character can fall into, and becomes another key figure worth watching and caring about.  Some of the other cast members fall victim to playing just the fairy tale surface of things, more caricature than human being.  The story and the script make this an easy mistake to fall prey to, so I can understand how it happened.  Others in the ensemble sometimes think volume equals intensity or feeling - we could do with a little less shouting and a little more connecting.  But Sueno is such a fast-moving tale, particularly in the action-packed second half with full-scale/full-cast battles consuming the full stage of the vast Lab Theater, that temporary hiccups like that can be forgiven in the evening as a whole.

“God’s actual fingerprints are there.”

Speaking of action, Joel Sass’ set is fantastic, a combination of wooden platforms (and a wooden moon) and numerous moving metal panels on wheels serving as walls and doors and anything else that’s needed, plus an imposing rolling ladder with a platform high above our heads.  The whole thing moves and reshapes itself in a variety of configurations, sometimes moving just as gracefully or speedily as the actors themselves.  Mike Grogan’s lighting design helps to focus audience attention so the story doesn’t get lost in the big Lab Theater space - and that’s a huge help to the story.  It could easily fall apart without that guiding light, helping to set not just location but mood - and again, that wooden moon - a combination of set and lighting work, just lovely.

“I read once, in one of the many theological treatises I ate…”

The costumes from designer Mary Anne Kelling (with assistance from Laura Jones) really nailed the difference between characters of high and low estate - the prince in prison, and the various underling characters had clothes to fit their fortunes, while the characters in the royal court really stood out with color and even sparkled.  The visual extremes helped set up the boundaries of this otherworldly story.  Since I can’t pinpoint any elements of Eric Gonzalez’s sound design, it has to be one of those that fit the world of Sueno so perfectly that it didn’t stand out by being too flashy and calling attention to itself, or so out of place that it seemed wrong.  It rode the middle line and bolstered the tale as needed.

“Liars and promise-breakers hold a special place in the inferno of my heart.”

If ever a show needed both a violence and intimacy choreographer (sometimes disturbingly mixed together), it’s Sueno, so they’re lucky to have had David P. Schneider on the case.  Both just realistic enough to make you uncomfortable but not enough to drive anyone onstage or off over the edge.  And with such a large stage and cast, using big design elements and moving through a story of many locations and subplots at a brisk pace, including some full-on war taking place, kudos to stage manager Suzanne Victoria Cross and ASM Johanna Keller Flores for keeping the whole thing on course from start to finish.  That fact that your work was completely invisible and the show ran smoothly means you were probably working your tails off the whole night.

Pangea World Theater’s sprawling, epic production of Sueno posits that if we considered our life, both the good things and the bad things, as a dream we might easily wake up from at any moment, maybe we’d pay closer attention and appreciate the good things, not take them for granted as lasting forever. We might also bear the bad things with more grace, since they, too, are transitory.  It’s because we think we have all the time in the world that we can waste a lot of our time without meaning to.  And we can get run down by thinking during the bad times that things are never going to change, or that events are out of our control to influence, when that’s very likely not true at all.  Perhaps especially now, it’s good to be awakened to the positive moments in the midst of trying times.  Hopefully we’ll still appreciate the good times when they are - with luck and perseverance - more plentiful in the future.

“Whatever God writes in the book of destiny cannot be rewritten, just mistranslated.”

Take care and be well, everyone - whatever reality you’re choosing to live in.  (Viruses permitting, Sueno performs through March 22, 2020 at the Lab Theater)