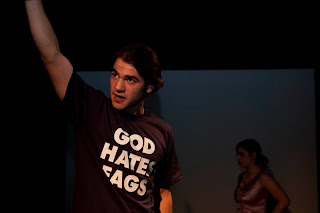 In advance of auditions next week, the director has chosen sides from the script as the scenes we will use for the readings.  The theater asked me to post the sides online, and thanks to my hand website as a web repository of bits and pieces of my work, most of them were already live in one form or other.  I've posted two new additions which were selected, so here are some handy links.

The monologues being used can be found here.

A monologue for the Duchess, a minister without a church trying to get in the frame of mind to perform the wedding ceremony

"I don’t blame my congregation. It’s not easy to understand why I did what I did. What I had to do."

A monologue for Duke, a policeman trying to make sense of his assignment today, and life as a widower

"We didn’t use to have to protect churches. Not from the faithful, not from anyone."

A monologue for Jacob, younger brother of gay groom Patrick rallying the protesters outside the church

The scenes being used can be found here.

“There’s not an ounce of romance in any one of you, is there?”

“It’s just -- the way things are going, I keep waiting for the midgets or a dancing bear to show up.”

A scene for wedding couple Eleanor and Roland in the aftermath of a church window being smashed with a rock, and Roland learning Eleanor has a non-traditional wedding dress (discussed in the previous scene with brother Ephram)

" -- just you, walking down the center aisle of a church, toward me -- looking like you were getting married, to me. Does that make any sense at all?"

A scene for wedding couple Ephram and Patrick in the aftermath of the rock, charting the course from their first date to a wedding with protesters outside the church

A scene for Duke gathering evidence, with the couples and the Duchess complicating matters

"You probably have my [finger]prints on file."

A scene for Duke and the Duchess, after he finds out she started her life as a man

"When did the world become so complicated?"

A scene for the couples and Duke to confront Jacob, after he throws another rock that injures Ephram

"Honey, I think I’ve finished clotting, if you’d like a prop."


SYNOPSIS
But Not for Love is a tale of two weddings – the double wedding of a straight couple and a gay couple.  Siblings Ephram and Eleanor are marrying their partners (Patrick and Roland, respectively), in a joint ceremony at the same church the siblings attended since childhood.  But despite the two unions about to take place, the members of the wedding parties are divided over the individual expectations each has for their particular ceremony, and outside the church, animosity and the threat of violence simmer among a crowd of protesters and almost force both marriages to be called off.  Supporting roles include a lovelorn lady minister (the Duchess) with a secret from her past; a conflicted policeman (Duke) charged to keep the peace during the ceremony; and a protesting family member (Jacob) leading the angry mob of religious objectors outside the church.  But Not for Love is an honest, engaging comedy-drama illuminating today’s GLBT issues and the future of human equality.