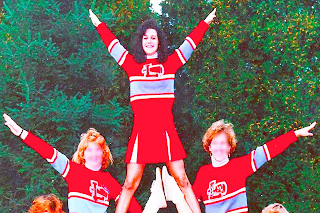 Confessions of a Delinquent Cheerleader - presented by FurTrader Productions

Who were you in High School? Hear true stories of a reformed cheerleader/bad girl at a private school back in the late 1980s. At times hilarious, at times tragic, she shares her "glory days" for all to judge.

You know how some people are just naturally funny, they can’t help themselves?  They’re not trying hard to make you laugh, they’re just what seems to be effortlessly amusing?  That’s Mame Pelletier, the brains and talent behind Confessions of a Delinquent Cheerleader.

"Hi, my name is Mame, and I'm a recovering cheerleader."


I remember several years ago when a writer friend of mine and I saw Mame participate as an actor in Theatre Unbound’s 24:00:00 Xtreme Theatre Smackdown and we both had the same reaction about her, “Who the heck is she and where has she been hiding?  She’s fantastic!”  Every time I’ve seen her since then, she’s just delightful and a lot of fun to watch in action, no matter what she’s doing on stage.

This is one of a handful of shows I was already really excited about getting to see, and bring Mom to see.  She’s seen Mame in other people’s plays, but she’s never seen Mame under her own spotlight.  So these tales of her cheerleading days back in the 1980s should be a real hoot.

Mame even has her own wheel of fortune, which will determine some of the comic stories to be told each night at random.  She has a set portion of the story that everyone gets to hear, of course.  But a little randomizer in the mix never hurt anything.  (The winner for Fringe Preview night: Menses.)

I’m really happy to see Mame create a showcase for herself like this, and equally happy it gets to brighten up this year’s Fringe.  Mom has accumulated a list of favorite performers in the Fringe over the years.  After this, Mom will be asking each year as Fringe rolls around again, “What’s Mame doing this year?”
Posted by Matthew at 7/27/2015 08:37:00 PM
Labels: Fringe Archives 2015, Fringe For All