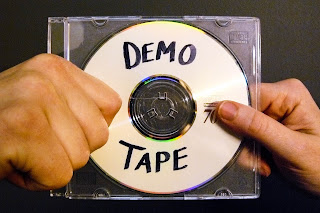 With songs more self-aware than the characters that perform them, this original musical comedy pokes fun at the tribulations of forming a band.

Demo Tape was, hands down, the biggest and most pleasant surprise of the first set of Fringe previews.  The gimmick of their show postcard actually being a demo CD is smart, but visually a little bland, and it’s also their show image.  The description is tight but, again, nothing that makes any alarm bells go off that say, “You must see this.”  However, their preview kicked some serious butt.  Fringe posted a video so you can see for yourself:

“We’re not sure what’s causing all the buzzing, but it’s on every track.”

On one level, it was just a song, but man, was it the right song.  The guy playing it knows his way around a guitar, he knows how to deliver a song, he knows how to work a crowd.  His partner in crime, a silent and forlorn young woman, almost apologetically lays out the guitar case for tips, and then timidly enters the audience to hand out their CD.  She may be in character, but she still got that thing in people’s hands.  Honestly, how could you say no to her?  She was still in character handing out the CD after the previews were over, standing by the guitar case in the lobby.  I made sure to smile and say I already had one (which I do, and I’m looking forward to listening to).  Those in the audience who didn’t get one I’m sure went looking for them afterward.

“Please find us on Bandcamp.”

The show is basically theater about the struggles of artists, so it normally wouldn’t be my thing.  But the song was clever, and funny, and enormously entertaining.  And the musicians (and those who love musicians) in the crowd I’m sure enjoyed it on a whole other level than the rest of us.  There was a lot of knowing laughter inside and between the bigger full audience laughs, which just kept coming.  Still don’t know a thing about the plot, but if one song can be this much fun, I’m all for signing on for the rest of the show.  This is a prime example of how a good preview can make your show stand out in a very crowded field.
Posted by Matthew at 7/27/2015 08:39:00 PM
Labels: Fringe Archives 2015, Fringe For All