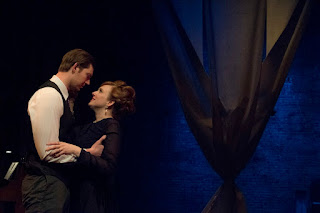 I’ve been struggling with Savage Umbrella’s remounting of their adaptation of Kate Chopin’s 19th century feminist novel The Awakening ever since I saw it last Friday.  I wasn’t familiar with the source material and I missed the original production, so what I saw that night is all I have to go on.  I’d be interested to see if people who know the book or saw the play in its first incarnation experience the story any differently.  Because I keep encountering more and more theater lately where my brain keeps insisting that I answer a set of pesky questions: Why tell this story, in this way, at this particular time, for this audience?

“I cannot permit you to stay outside at night.”
“Don’t speak to me that way again.  I won’t answer you.”

Edna (Emily Dussault) has the kind of problems you wish you had.  The woman is drenched in privilege.  If she has a fit and throws a chair across the room, a servant will come in and pick it up for her.  She has such a great nanny that we have to constantly be reminded Edna has two children.  They don’t impact her life in the slightest, and remain offstage for the entirety of the evening.  On top of this not one, not two, not three, but four people are living in various states of infatuation and love with her - male and female.

“I want to feel your wings.  I want to see if your wings are strong.”

There’s Edna’s husband Leonce (Seth K. Hale), who makes sure the whole family can afford to live a very comfortable life, and looks after appearances for society’s sake when Edna can’t be bothered.  There’s the local womanizer Alcee (Mike Swan), who finds Edna fascinating and well worth seducing.  There’s lesbian musician Mademoiselle Reisz (Alexis Clarksean), who’s overtly homoerotic with Edna, but never in a way that crosses a line without permission.  Most of all there’s Robert (Nick Wolf), one of the adult sons of the family that runs a vacation resort where Edna’s family spends an eventful summer.  Edna and Robert’s summer flirtation opens her eyes to a world of possibilities, even if Robert himself is too mindful of society’s rules to allow himself to fully surrender to an affair with a married woman.

“Things like this seem small but we have to take them seriously.”

To provide a counter-example for Edna, there’s her friend Adele (Amber Davis), Adele’s very affectionate and loving husband Alphonse (Russ Dugger), and their son Ari (Thomas Ferguson, Daniel Rovinsky).  Not only does the child actually make a cameo appearance on stage, Adele’s pregnancy introduces motherhood to Edna in ways with which Edna apparently is unfamiliar.  Just talking about pregnancy makes Edna squeamish.  Edna was apparently unconscious on the best of drugs when she gave birth (twice) because when Adele later calls for Edna to be present at the birth of Adele’s latest offspring, seeing the miracle of life firsthand really throws Edna for a loop.  All these folks are surrounded by host of other people representing a largely disapproving society (Nayely Becerra, Lauren Diesch, Nathan Gebhard, Aaron Henry, Rachel Kuhnle, Eric Marinus, and Tinne Rosenmeier), countering Edna at every turn in her experiments with liberty and free will.

“I thought I might die out there all by myself.”

This is a tragedy in the old-fashioned sense - a person of privilege in society falls from a height much greater than the rest of us would have to fall.  This is the 1890s, in Louisiana of the old South.  Edna is a woman.  She is stepping out of line - worst of all in a puritan nation, sexually - so, one way or another, she will be punished.

The thing I have the greatest problem is, naturally, the one thing I can’t speak about - the ending.  It would be a spoiler of the first order.  Depending on how optimistic you’re feeling, you could argue that the ending could be interpreted a couple of different ways.  But if you’re too optimistic, then any potential escape for Edna means it wasn’t really a tragedy after all, right?  And if your worst fears are confirmed, well, I’m not sure a shower of rose petals falling from the sky makes anything better (no, really, that happens).

“Of whom, of what, are you thinking?”

Much as I wrestle with the story, Savage Umbrella’s production is fantastic.  It looks gorgeous.  The costumes in particular (by Sarah French with assistance from Alexandra Gould) not only set the period beautifully but the change in palette from the brightness of summer to the dark, rich colors when vacation time is over and the family returns home for the second act visually reinforces the flow and mood of the story.  Lights and setting (Adam Raine and Meagan Kedrowski, respectively) also play a huge role here - from open, expansive and light in the first half, to focused down, constricted and dark in the second half.  It’s not the sledgehammer approach I probably make it sound like.  Something as simple as billowing fabric, lit from inside, hanging in the air, later released to hang down straight, opaque and casting shadows has enormous impact on the tone of the piece.

“I hope you have some suitable excuse.”

And the acting here really is something.  Director/adaptor Laura Leffler-McCabe has assembled a cast here that knows how to do a slow burn on Edna’s simmering emotions, with Dussault of course, leading the pack.  The whole thing would not work without her, and her cadre of suitors (Clarksean, Hale, Swan, and Wolf).  I also nearly left out the music, which is almost another character in the play, composed by Candace Emberley, performed by a trio of piano (Nic Delcambre, also music director), clarinet (Carley Olson) and violin (Alissa Ona Jacobsen).

“I am thinking I would like to be alone there with you, in the sun.”

My struggle with the story may in part be due to the balance of the three parts of it.  There’s the awakening of Edna to the fact that she probably has more choices in life than she’s been allowing herself.  That’s all of act one.  The other two parts of the story are her waking life, if you will, and the unraveling that follows.  You could argue that the first half of the second act, that waking life, is another phase of her awakening, in which case the unraveling seems even more abrupt and rushed.  I might be more accepting and less troubled by the outcome, as a spectator, if I felt I understood it better.  The awakening itself is a really slow burn, and that sexual tension and gradual teasing out of Edna’s new consciousness works, because the production as a whole makes it work.  The unraveling needs the same kind of grounding and attention, because right now it feels like it comes out of nowhere and then we’re in a headlong rush to the finish line.  Edna seems to be managing things just fine, and then all of a sudden she’s just not anymore.  Let’s face it, when someone walks out in a nurse’s uniform at the end of a play, that’s Tennessee Williams’ shorthand for “someone’s lost their marbles.”  And I’m not sure the setup feels like it’s leading to that payoff right now.

Also, the novel’s vestigial tail (no pun intended) of the author’s narrative voice brought to life at random points by the ensemble becomes a bit of a distraction.  The regular character-based acting here works so well, and makes the story so clear, that the additional flourishes of language feel like an unnecessary gilding of the lily.  The ensemble voice is largely a function of Edna’s inner voice anyway.  Finding a way to hand those duties off to an actress of Dussault’s caliber - or maybe a single  additional voice rather than a multitude - might be a more effective way to get those thoughts out.

“I wonder if any night on earth will ever again be like this one.”

All that said, the look, the mood, and the atmosphere of The Awakening, as well as the central performances, make it well worth seeing.  I’m just still struggling personally with the “Why?” of it all. (performs at the Southern Theater through March 18, 2017)

(Nick Wolf and Emily Dussault as Robert and Edna in Savage Umbrella's adaptation of The Awakening; photographer: Carl Atiya Swanson)