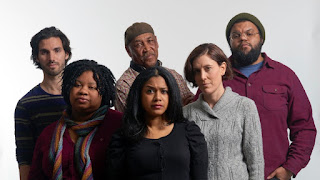 (I apologize in advance for this review, as I am doubtless saying somewhere below something stupid or insensitive about which I am still unforgivably clueless.  I labor under no delusions that anything I write is news to anyone.  We learn by doing…)

“The rules that everyone else gets to play by no longer apply to you.”

Go see Frank Theatre’s stage adaptation of Claudia Rankine’s book Citizen: An American Lyric.  Just go.  See it.  Then go out into the lobby and buy yourself a copy of the book, and read it.  It’s one of the best pieces of theater I’ve seen so far in this still young-ish new year and easily the most important.  It’s the nicest thing you can do for yourself and your self-awareness.  Citizen: An American Lyric is smart and sharp and funny and painful and sad and heartbreaking and yet, in spite of all evidence to the contrary, hopeful.  Because we are all human, and thus sometimes insensitive or stupid.  We regularly need people willing to help get us up to speed with things of which we might otherwise not be aware.

“This unsmiling image of you makes him uncomfortable.”

A co-worker and I regularly have a conversation about representation in theater.  When I see something featuring actors of color as a majority of the cast, I get excited because I feel that signifies progress.  And, frankly, these days, such shows are just more interesting to me than blindingly white stories I’ve seen a million times before.  My co-worker, a person of color, also having seen these shows, invariably responds that, yes, it’s nice, but honestly the show isn’t telling people of color anything they don’t already know.  The show is essentially designed to make white people better acquainted with the racism and imbalance in society and art that already exists, but doesn’t (seem to) impact them directly (yet).  This makes writing reviews like this one, which I’ve been trying to formulate since I saw Citizen: An American Lyric last weekend, a seemingly impossible task.  Anything I say, lined up next to the insights and skill of Claudia Rankine, is just going to seem hopelessly naive or clueless.  But I want you to see it, so I have to say something. 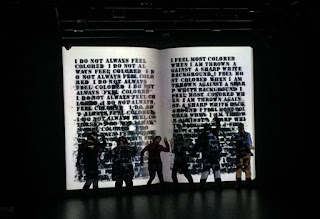 So is Citizen: An American Lyric telling audience members of color anything they don’t already know?  Probably not.  Is it telling me anything I don’t already know?  Yes and no, but here’s the thing - I don’t think anyone should be getting points for understanding how bad things are if they’re not also working to change them.  Pundits, politicians and community leaders frequently say we need to have a discussion about race, locally and nationally.  Citizen: An American Lyric does that.  And it needs to, because, frankly, anyone who’s white who has friends who are people of color most of the time has no idea what questions to ask.  Or how to avoid saying something stupid.  And, as Citizen points out time and again, people of color have a hard enough time just navigating through the daily injustices and micro-aggressions that are built into our society.  The last thing they want to do, or should be asked to do, is relive all that just for the benefit of explaining it to people who have never experienced it.

“I feel most colored when I am thrown against a sharp white background.”

Frank Theatre’s production Citizen: An American Lyric in an odd way serves as a friend of color who is infinitely patient in explaining to their white friends all the things they don’t know (or don’t see). There’s a reason Rankine’s book was a New York Times bestseller (the only poetry book to do so in the nonfiction category), a finalist for the 2014 National Book Award in Poetry, a finalist for the 2015 T.S. Eliot Prize,

“As light as the rain seems, it is still raining down on you.”

and the winner of: the 2015 National Book Critics Circle Award in Poetry (also a finalist in the Criticism category - the first book in the award’s history to be nominated in both categories),

“This would be your fatal flaw - your memory.”

winner of the 2015 PEN Open Book Award, the 2015 NAACP Image Award for Outstanding Literary Work in Poetry, the 2015 Forward Prize for Best Collection,

“Only then do you realize that you are among the others, not among friends.”

“The man knows more about the unoccupied seat than you do.”

winner of the 2015 PEN American Center USA Literary Award, and the 2015 Hurston/Wright Legacy Award in Poetry.

“You fall back into that which is reconstructed as metaphor.”

It was also named a Best Book of the Year by the Boston Globe, Los Angeles Times, National Public Radio, New York, the New Yorker, Publishers Weekly, Slate, and Time Out New York.

“Take your foot off your throat.”

The reason people couldn’t throw enough awards at this book is that Claudia Rankine has a unique gift for crystallizing these moments of clarity when people see the world, and the other people in it, for what it is, what they are.  Rankine has the gift of giving people better sight, and better understanding.  If you can’t see the problem, you can’t fix it.

“No amount of visibility can change the way one is perceived.”

So how do you stage a book of poetry?  Rankine gets Frank Theatre more than halfway there because Citizen: An American Lyric is a book that’s very conversational and down to earth in tone.  It’s like having a talk with someone you know really well, someone who believes that they can tell you anything - that you will hear it, and that you’ll understand.  Some locations are called out in the text - a car, a driveway, a subway, a Starbucks coffee shop, a tennis court, a soccer field.  Others need to be created through staging and design.  Director Wendy Knox has a mix of Frank regulars and newcomers in her cast, all of whom have a substantial list of credits ranging from the small stages of the Minnesota Fringe Festival all the way up to the Guthrie Theater.  Actors Heather Bunch, Hope Cervantes, Michael Hanna, Theo Langason, Joe Nathan Thomas and Dana Lee Thompson bring these words to life as few people can.

“Although no one is chasing you, the justice system has other plans.”

The cast is backed up by a stellar bunch of designers who give them a striking canvas of sound and light on which to work.  There isn’t a physical set, just six chairs.  The real setting of the scene happens thanks to Mike Wangen’s lighting design, Bill Cottman’s projection design (with a video assist from Maxwell Collyard), and Michael Croswell’s sound design. Whether the actors are dodging the sound of raindrops, sitting in their car staring at the garage door late at night, or watching/reenacting the tennis saga of Serena Williams, the design elements all reinforce their work and invite the audience into their world.  The most vivid examples include the Serena Williams section of the play (where we get to see the sports news coverage mixed with live action moments, and the sound of tennis balls being hit can sound like gunshots); a verbal and visual litany of just a fraction of the names of the people we’ve lost to gun violence, police violence and racism; and a sequence where the actors find themselves trapped against a wall of words.

“You think this is an experiment, and you are being tested.”

Where the play makes its strongest emotional marks, though, are the “smaller” moments illuminating much larger issues, and bringing us closer to the human heart of the work.  A white woman stands, rather than take an empty seat next to a black man on a train.  A woman of color chooses to sit with him.  A white man brushes past a small black child, knocking the child down.  The child’s mother pursues the man, wanting him to see her child, wanting him to apologize.  Men of color who the mother does not know move to stand behind her in solidarity.  Moments inside a person’s head where they wonder “do I say something? do I call this out? what is it going to cost me if I don’t? what is it going to cost me if I do?”

You wouldn’t think a play could cover the ground from Trayvon Martin to Hurricane Katrina and a host of other challenges, tragedies and catastrophes is such a short time and leave its audience feeling invigorated rather than depressed or exhausted.  But that’s what Frank Theatre’s dance with Claudia Rankine’s words do in Citizen: An American Lyric.  The friend who attended with me was left speechless for a few minutes.  I was energized, but also well aware of the nearly impossible task of talking about Citizen: An American Lyric without sticking my foot in my mouth - repeatedly.  Forgive my blundering above and if you remember anything, just remember this:

Go see Frank Theatre’s stage adaptation of Claudia Rankine’s Citizen: An American Lyric.  Just go.  See it.  It’s easily the most important piece of theater I’ve seen so far this year.  It’s also the nicest thing you can do for yourself and your self-awareness.  (I'm going to go back to reading my copy of the book now.) (runs now through April 2, 2017 at Intermedia Arts)