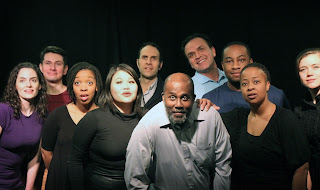 I’ll just get this out of the way up front.  Go.  There is absolutely nothing wrong with this production.  It will renew your faith in the power and purpose of theater.  It is a delight.  You should go see Full Circle Theater’s 2017 Remix of Suzan-Lori Park’s 365 Days/365 Plays over at the Penumbra space.  You just should.  Treat yourself.


“We keep going in darkness, toward darkness.  Believe me.  It’s the only way.”

This is, of course, not all 365 plays.  They manage to serve up 46 of the plays in a little over two hours, but Parks’ work has 319 more for you to peruse on your own time.  That’s why, back in 2007 when the project first premiered, it took over 700 theaters across America (30 of them in Minnesota) to present all the plays over the course of a year.  Each individual piece of this project carries a lot of emotional weight - whether serious or whimsical.  Just the 46 Full Circle has in play for their 2017 remix feel like an embarrassment of riches.  If you weren’t a fan of Suzan-Lori Parks before, this production will turn you into one.

Two Examples of the Interconnectedness of All Things, part 1

Parks’ way with language, and humor, and history is kind of mind-boggling. No mystery why she has a Pulitzer Prize and a MacArthur “Genius” Award on her resume. Depending on the short play in question, she’s either the heart, the conscience or the court jester of America.  Regardless, she’s always the brain.  Whether an actor is performing a miniature history of the human race, strapping on wings to fly, or pretending to be a fish, your mind is always fully engaged when watching 365 Days/365 Plays.  To write each one of these little gems, every day, for a year - that’s a wonderful challenge for a playwright like Parks to set themselves.  We should all be so lucky to have such results.

“You see that road, the wide one?  I came down that road once.”

You’d think something written in 2002, premiered in 2007 (both pre-Obama, let that sink in) would easily be in danger of being dated.  Part of Parks’ genius is she nails the universal and the timeless so perfectly, and leaves room to interpret her stories in any number of ways.  The opener must have had some instruction to “insert the most maddening recent headlines here” because right out of the gate we are placed squarely in our current reality.  There is a Trump-ian figure who reappears throughout the evening, but in a way that doesn’t seem forced, and which reinforces the notion that men like that have always been with us.  They’re an unfortunate by-product of the evolution of the American idea.

But that oafish caricature isn’t the focus of the evening (thankfully).  Parks and Full Circle have more important things to think about.  Life in America is bigger than any one political misfortune.  Parks’ is meditating on war, race, history, police brutality, family, politics, and most importantly, hope.  Sometimes it’s direct, sometimes it’s metaphorical.

“The window of opportunity is now open.”

It took five directors (co-artistic directors Rick Shiomi and Martha B. Johnson, and Stephanie Lein Walseth, Lara Trujillo and Harry Waters, Jr.) and an ensemble of ten extremely versatile actors to pull this off (Ricardo Beaird, Elizabeth Cates, Shana Eisenberg, Ashawnti Sakina Ford, Gaosong V. Heu, Marcos Lopez,  Daniel Sakamoto-Wengel, Siddeeqah Shabazz, and Matthew Thompson, with James A. Williams [1st weekend] and Daniel Coleman [last two weekends] splitting the run).  Nothing ever feels rushed onstage in front of us, but the pace for the actors on any given night must be staggering.  That’s a lot of psychological territory and characters to cover, but they all handle it with grace and endless inventiveness.  They are aided in this endeavor by Dan Keyser’s multilevel set with all sorts of places to pop out of, plus Karin Olson’s lights and Quinci Bachman and Michele.Be’s sound to help set time and place, and Trevor Bowen’s costumes to give each of the people in this array of characters their own particular look (Bowen’s skill is what helps us know we’ve come - excuse the phrase - full circle to the end of our journey).

This Probably Isn’t a Play

A brief and tiny sampling of some of what’s in the remix: a family of runaway slaves is aided in their escape by the ghosts of both the past and the future; we’re treated to the birth of Abraham Lincoln, and later his wife Mary Todd Lincoln and her African American dressmaker Mrs. Keckley on what is revealed to be the last night of Lincoln’s life; a butcher’s daughter chooses a family blade to take out into the world with her and seek her fortune, but still returns to her father at the end of his life; a man has spent so many years at war that he comes home to find all his family has grown up and moved on; a traditional artist and an innovative artist both manage to run afoul of the powers that be; black people marvel at white people’s boundless capacity to always manage to make everything about themselves; a random musical number suddenly invades the middle of a completely different kind of scene; a group of people hold hands to find their way through the dark.

“You don’t even know how to speak the language of wherever it is you’re headed.”

You really need to experience Full Circle Theater’s 365 Days/365 Plays: a 2017 Remix for yourself.  I could talk about it all day and night and not encompass the breadth and depth of it.  It’s the kind of thing that live theater was made for.  It makes me very excited for whatever Full Circle has planned next.  If you wonder why we need yet another theater company in a town full of them, a production like this is your answer. (playing now through June 11, 2007 at Penumbra Theatre)