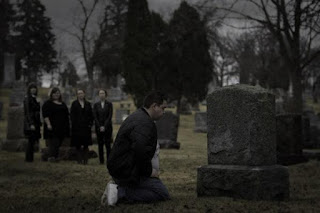 Playwright Josh Cragun, director Mitchell Frazier, assistant director/actor Ernest Briggs, and the rest of the Nimbus Theatre creative team have assigned themselves a daunting task with their latest new work Redemption. They’re trying to wrap their arms around the state of the criminal justice system in America, with a focus on the challenges of prisoners having served their time trying to reenter society after their release. Both the systems of the society at large, and the emotions of people directly involved, present a series of obstacles to be overcome to try and build a “normal” life. The redemption of the title is hard to come by, though not entirely impossible.  The production of Redemption is sometimes confusing, but never less than compelling viewing.  It’s a worthwhile attempt at a complicated conversation.

“Why didn’t anyone tell me the goals were impossible?”

Redemption follows the personal struggles of two recently released prisoners over the course of a summer and into the fall.  Shawn (Ernest Briggs) doesn’t have any family left on the outside willing to receive him, so he must rely on the good graces of his friend Derek (Richard D. Woods) to provide a place to live. Shawn wants to help young people avoid the mistakes he made, but the sorts of places that serve youth aren’t willing to risk having an ex-con on the payroll.  Shawn’s criminal record makes it hard to find both employment and a place of his own to live.  Shawn was convicted of murder in an armed robbery attempt that went wrong.  The widow of his victim, Beth (Julie Phillips), didn’t stand in the way of his release, but has a “no contact” order on file, so Shawn is not allowed to see or communicate with her in any way.  Part of the tension of the play is waiting to see if and how that order might be violated, and what the consequences will be.

“Life is hustling.  Some of it just happens to be legal.”

Beth runs a florist shop. Her employee Dee (Ashe Jaafaru) is the daughter of another convict about to be released.  Dee’s mother Sandra (Dana Lee Thompson) was sent to prison for negligence that led to the death of her son, Dee’s brother.  This turn of events also condemned Dee to a childhood in the foster care system, which had its own challenges.  Both mother and daughter are trying to turn their lives around by going back to school.  A reconciliation between the two will be harder to manage.

“I want you to know there’s a woman here and not just a monster.”

Connecting all of these people is Shawn and Sandra’s overworked but sympathetic parole officer Meghan (Calli Kunz).  Rounding out the ensemble are William L. PanKratz II and David Tufford, each playing a series of different roles.  In fact everyone in the ensemble does double or triple duty playing roles in the present and in multiple flashbacks that pepper the narrative.  As characters recount past events in their lives, members of the ensemble play across age and race to take on the identities of the different people in the story when they were younger, before prison entered their lives. It’s a potentially risky strategy but because the script makes clear who’s playing what role when (and because the performers all deliver in this juggling act of identity), there’s no confusion.  This approach also has the added benefit of breaking down possible barriers created by race in the minds of the audience, helping to expand the scope of the world onstage.

Time and identity may be fluid in Redemption, but place is always clear.  Set designer Brian Hesser has filled the Crane Theater space with different locations having very specific boundaries and looks.  There’s an apartment space on one side, where Shawn tries to build a new life, and where the events of Sandra’s past life unfold.  There’s the florist shop on the opposite side of the stage, Beth and Dee’s refuge, as far away from the apartment of the past and present as possible, with a gulf of space in between where other scenes can take place.  Behind the apartment is a space with a counter and cash register that alternates between being a store and a garage.  In the center of it all, where the story begins and ends and returns periodically between, is the prison/parole officer’s work space.

Brent Anderson’s lighting design either focuses on a particular space or allows the boundaries between them to be more fluid, depending on what the story calls for.  Caitlin Hammel’s video design provides title cards to help keep track of time and place in the present, and gauzy jittery loops of images projected on the set to make the flashbacks more visually distinct.  But since the set and dialogue in the script make the settings of each scene pretty clear, the only new information we get in those title cards are the specific dates which remind us how brief the passage of time is in the play. I go back and forth on the importance of that information, and the utility of the title cards.  They’re not distracting, I’m just not all that sure they’re necessary. The fuzzy video of the past, however, is a nice, unsettling look for the generally not-so-happy flashbacks, so some of the extra layer of tech is helping.

“I’m just a piece of human garbage getting tossed from one can to another.”

The one odd storytelling strategy is the revising of personal histories. In the case of both the crimes that sent Shawn and Sandra to jail, the audience gets one set of information early on which the characters treat as definitive.  Shawn killed Beth’s husband, Sandra killed her son. In the case of Shawn, we actually see it acted out on stage.  In the case of Sandra, it’s just reported to us with no details to follow up. Then later, another version of the same crimes gets floated that undercuts both of the previous stories.  In both cases, it seems to want to reframe these tragedies as horrible accidents.  In Shawn’s case, I just don’t buy it.  In Sandra’s case, it’s such a completely different story that it makes me question why the person telling us was so sure in the first place.  In both cases, it seems completely unnecessary.

“I’m not wasting any more of my time.”

We’ve already seen and gotten to know Shawn and Sandra as human beings.  We don’t need to soften their crimes so late in the story in order to gain our sympathy.  The play is about the difficulty of re-entry into society and forgiveness - forgiving yourself as well as others forgiving you.  Regardless of what the real story is, the victim is just as dead.  Muddying the waters of what the parolees’ crimes actually were doesn’t seem to serve any useful purpose.  It’s not a play about people being sent down the river for something they didn’t really do.  It’s not about being wrongly accused (though, lord knows, our criminal justice system has plenty of that to go around, too).  The redemption these characters seek doesn’t come from somehow making their crimes less horrible. It comes from knowing their crimes are bad and, after they serve their time, forgiving them anyway, and allowing them to build a new life. Redemption does a good job making us care about all these characters as people.  I’m a little baffled why it suddenly screws with its own accepted reality in this fashion.

“I still don’t know what I’m looking at when I see you.”

Even with that little storytelling detour, however, the play holds an audience’s attention for the full evening.  While the play seems realistic in the depiction of some of the struggles these characters encounter being frustrated by the system, it is neither unrelentingly bleak, nor unrealistically sentimental. Its little victories, it earns.  Its little failures are sad, but not unexpected.  Redemption does a good job providing a nuanced view of a complicated subject and making it truly human, rather than a dry documentary full of talking points.  What they’re doing is harder than it looks, and there’s a lot to like about the end result.  Nimbus Theatre cares about this story, and it shows.  You should see it.  (runs through May 14, 2017 at the Crane Theater)