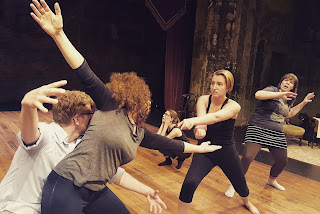 If you want to get in on the ground floor of the creation of three brand new plays and perhaps help shape their future direction, Savage Umbrella is offering up a showcase of theater in development in their Night of New Works at the Southern Theater this week. You can just be a spectator, you can offer your written feedback, or you can stay and talk directly to the artists after the show in a post-play discussion. Your level of involvement is up to you, but the artists really do want to know what you think and watch how you respond to the pieces on display. Savage Umbrella has mini-surveys in the program with simple but useful questions you can answer quickly such as “What was the most striking thing in the play?” “What are you excited to see more of?” “What could you stand to see less of, or see differently?” “Did anything surprise you?” “Describe the show in three words”  It’s an interesting exercise to digest a work while it’s still so fresh in your mind.  And Savage Umbrella has three very different offerings in this batch of new works, though most of them are largely script based.

The first half of the evening contains two new works-in-progress:

“She stares at the door as if she’s seeing a ghost. The door begins to glow.”

“Lea returns to her childhood home for the first time in over a decade, where she finds the long forgotten second bathroom that her mother moved a cabinet in front of when she was six. Rediscovering the second bathroom leads Lea to think about the existence of the alternate reality she and her family had lived in for years— a reality in which they had only one bathroom. The unraveling of this reality leads Lea down a rabbit hole of memories that force her to confront the construction of not only her past, but her present reality.”

“Two hearts to pump oxygen, one to pump blood.”

“An exploration of environmental, personal, and political themes around the mystery of the Giant Squid, as well as the growth in squid populations that has occurred because of the rise of temperature in the oceans waters. Biology, mythology, and music act as connective tissue for a series of vignettes about the human experience.”

There’s a brief break for changeover between the two so you can stretch and scribble down your thoughts.  Then after those two there’s an intermission, and the second half is a presentation of the work-in-progress:

“Reserve Mining is going to pay him to plow everything.”

“Using Otto Nicolai’s 1849 opera--The Merry Wives of Windsor—and the songs of Bruce Springsteen as a springboard, Dr. Falstaff and the Working Wives of Lake County explores the closing of the Reserve Mining Corporation in Silver Bay, the landmark legal battles to stop the dumping of waste rock in Lake Superior, and the layoffs that reduced population of Silver Bay more than 70% in two decades.”

This isn’t a traditional review, of course, because all three of these shows are still under construction. They all used this workshop experience to do different things, and all had script in hand (or on a music stand).  Dr. Falstaff chose to use the opportunity to fast forward past a lot of the music in the piece (though there was still plenty to be had even in the workshop) in order to get the entire plot - beginning, middle and end - laid out for the audience to see, to get a feel for whether it was working.  Second Bathroom kicked off at the beginning of the story and brought it to the end of a sequence that was a good breaking point for now.  Squid was a series of physical performance work (actors as undersea creatures), songs, and scenes - all interrelated, but not necessarily part of the same story.  The performers all threw themselves into the three works, treating them like they were a finished product whether they were acting, singing or squidding (or some combination of the three).

Second Bathroom was an absolutely fascinating premise for me.  We’ve all had things that we’ve hidden away, by accident or on purpose, in our homes, and sometimes coming upon them later can open up all sorts of insights into our lives.  The forgotten room, bursting with people and fantasies of the past, seems to be a super-rich environment to explore, and they seem to be just getting started tapping into all its possibilities.

“Will you come?
Will you stand
By the shore,
Into the water?”

Squid was delightfully odd. The actors really had a good time with all the different manifestations of the squid and other sea creatures. The songs were fun, sweet and a bit melancholy. I have to say it was nice having a pregnant lesbian couple at the center of the narrative (people, not lesbian squids, though who knows what the rewrites may turn up). If I had any suggestion for the Squid team it would be to set themselves completely free from the possible restrictions of a single linear narrative and just let loose with as many different manifestations of your central idea as possible.  You can sort it all out later.  Bonus points if you can find a way to make the environmentalist seem like the actual hero of the piece and not just a killjoy trying to spoil everyone’s fun by trying to save the planet. (Maybe if it’s a woman and not a man, for starters? White dudes don’t have all the answers, even if we think we do.) Maybe there’s a talking squid in your future as a central protagonist of one of the storylines?  Don’t let reality get you down.  Finding more ways to make the planetary stakes real in the present moment - in either literal or fantastical ways - would also be cool.  You’re more than halfway there with what you’ve got in hand.

“I can’t wait for the nudist camp ads in the Beaver Bay Bulletin.”

Dr. Falstaff isn’t really my thing but I appreciate the talents of everyone involved.  The combination of the operatic/Shakespearean source material with a real-life slice of Minnesota history is extremely clever. Minnesota humor is often lost on me, being a transplant. Local audiences, including this one, just eat it up, though, and there was plenty of it. The use of Springsteen songs right now just seems to be a placeholder for the play actually presenting a worker’s reality - they could probably ditch it.  The idea of opera music juxtaposed over performers doing manual labor has a lot of potential. Having the full time to show the details of that physical actor research will help, they were understandably under a time constraint here.

“How much life can this city support?”

“Do you want Alice In Wonderland, or spaceships?”

As you can see, there’s a lot of talent on display in Savage Umbrella’s Night of New Works and a lot of very different ideas bubbling up for an audience to mull oer.  They’re playing tonight (Tuesday 5/23) and tomorrow (Wednesday 5/24) over at the Southern Theater if you want to check them out and put in your own two cents worth of feedback.  I’m sure they’d love to see you.  And there are few things more exciting than new work taking shape right before your very eyes.  Have fun everyone.

(photo courtesy of Savage Umbrella - ensemble of A Squid Has Three Hearts, in action)