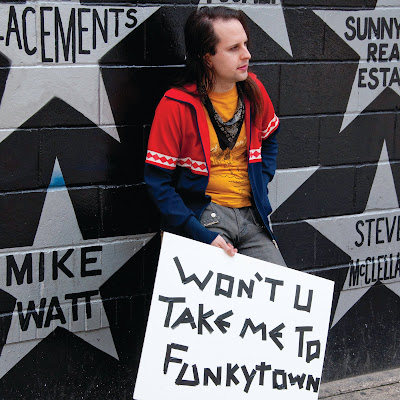 Of all the Fringe shows Mom and I saw together, we thought The 612 from Rogues Gallery Arts was the only one that didn't quite hold together.

It's better in the idea stage that it turned out here in execution. A site-specific theater piece, set in a garage converted into an art gallery. Four writers - Marcus Anthony, Mahmoud Hakima, Ruth Virkus, Duck Washington - tackle the subject of life in the 612 (telephone area code for Minneapolis) from a variety of angles. Local visual artists - Danya Althany Aletebi, Joseph Naughton, Erin Sayer, Danny Sigelman, Chris Williams - design the backdrops and set pieces for each of the plays. Three directors - Philip Henry, Crystal Schneider, Paul von Stoetzel - get the scripts on their feet with the help of an ensemble of actors - Shad Cooper, Jesse Corder, Kate Gunther, Linda Hayen, Ann Rice, Ashley D. Scott, Ryan Scott, Darrin Shaughnessy - several of whom do double duty appearing in more than one of the plays.

The main problem here is a lack of focus. That might have been remedied by having a single director instead of three. But it felt more like a lack of a clear directive at the producing level. There's Virkus' "Powderhorn Triptych" whose three parts serve as the overall framework for the presentation. But the other plays inside that structure are so independent from the triptych that you end up wondering what the production as a whole is trying to say, or is even about. There isn't anything here that invokes the personality of Minneapolis any more than any other city. The four scripts as a group don't feed into each other literally in terms of plot or thematically in terms of intellectual and emotional territory, so there's no accumulated experience for the audience that pays off at the end, making the whole greater than the some of its parts. The publicity describes the show as "an artistic hodgepodge" and its a fairly accurate assessment, though I'm sure they didn't mean in it the way that I experienced it.

Virkus' script - about a man lost in a park by a lake ("like that narrows it down," he says) unable to discern his location, unable to get home - is actually an interesting exploration of the human creatures who come out in the late hours of the night, early hours of the morning. It evokes the feeling it's going for, but I think it suffers by being split into three sections for the needs of the show. Together, the three parts make a complete picture. Separated, with completely unrelated stories in between, the cumulative impact is dissipated.

The most successful script is Hakima's "One Step Forward," in which two long-time friends (Cooper and Rice) inch toward expressing deeper feelings toward one another. The script plays with patterns in the language in inventive ways which the actors use to create different shadings each time they appear.

"Strike" from writer Anthony suffers from being a script that requires a sudden shift backward in time almost 80 years, in a production that otherwise is rooted in the present. Again, since there is no payoff in terms of the union riot having a ripple effect for the characters in the present of the other plays, the whole things seems like some weird sideways jump.

Washington's "Polar Expeditions" finds a couple stranded in a car in the snow in the middle of winter and they offer an extended riff on how damn cold and miserable it is to be in Minnesota at winter time. Amusing in that it takes place in the furnace of summer, where the audience receives small paper fans to keep themselves cool while the actors struggle under multiple layers of clothing. But not something we haven't heard before. If the change in seasons, like the change in time, added up to anything in the larger context of the production, we might have had an interesting portrait of the city. As it is, we've got four individual stories, some of which work better than others, which remain separate rather than a part of something larger.

Like I said up top, I admire the idea of The 612. The realization of the idea onstage still needs some reworking to accomplish its mission.