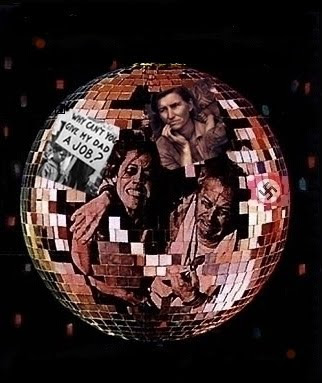 Scream Blue Murmur gives us just enough time to really miss them, and then thankfully they come back for another visit. I enjoyed them so much in 2007 with Pack Up Yer Troubles, that they were on my Top 20 list when they reappeared in 2009. Mom didn't get to see them then, though PhatBob did make a guest appearance at the Fringey talk show Hogg & The Humors that same year. I thoroughly enjoyed The Morning After The Summer of Love though it was quite literally the last regularly scheduled thing I saw at the Fringe that year, so I didn't end up reviewing it. They were so popular with everyone else, they landed the encore slot on the schedule (which was right after the show I saw, so I could have made it a back-to-back double feature if I'd stayed put).

"Smoke a pack of Camels, like the doctors do..."

Knowing they'd likely be quite popular again (and the Out of Towner Showcase bore that out), I made sure to get them on Mom's schedule this time around, and early. First day, last slot. Something's Gone Wrong in the Dreamhouse was a perfect way to end our first day of Fringing for 2011, and a mighty fine part of any Fringe day for the rest of you (but make reservations or get there early - they pack the place).

"The women, still missing their men at war..."

Even though they're a poetry/spoken word/music concert/lovefest kind of Fringe show, just like great Fringe dance shows Scream Blue Murmur - Aisling Doherty, Brian Faloon, Gordon Hewitt, and Chelley McLear - and Something's Gone Wrong in the Dreamhouse need to be experienced to be fully appreciated. My words cannot convey the way they make words dance in their poetry. My words cannot convey the way you just can't help smiling from the inside out when they engage the audience in song. My words cannot convey the uneasiness alongside a sense of calm that hanging out with these folks instills in a body. So because my language skills are inadequate to the task here, I have no problem recommending them to anyone. If you've experienced their shows before, then you know what I mean. If you haven't, well then you owe it to yourself to find out.

"Is this really what you want for your feet?"

Scream Blue Murmur doesn't wait for the house lights to dim or even the whole audience to be seated before Something's Gone Wrong in the Dreamhouse kicks into gear. They're not going to waste that ten minutes of pre-show. They're going to hand out water bottles filled instead with random bits of glitter, re-purposed as percussive instruments. If you're not shaking your bottle, then you will be called to account. This is full contact Fringing. They expect you to participate. They will teach you a song while you wait for the show to begin. Audience members are cajoled into coming up on stage and sharing a microphone, dancing and singing.

"Where justice can't see, their arms can't reach me..."

Things get loud, things get soft. Things get angry, things get tender. You are among friends. I was taking notes and shaking my glitter filled water bottle at the same time. If I don't want to be left out, I must multi-task. There is something so liberating about playing music. They know this, so they want to share it with as many people in the crowd as possible. It's the theatrical equivalent of a revival tent meeting.

Something's Gone Wrong in the Dreamhouse is delving into the upheavals taking place in the 1930s. Which is comforting, of course, because we don't fight wars anymore and the economy's in great shape and we don't have a race problem in our country, and women's rights, also not an issue. All that's solved, so looking at how so much has changed, well...

"Squeeze the air right out of their lungs..."

I'm being sarcastic, of course. And yeah, it's a little weird watching white people, even white people with Irish accents, decrying the woes of black people in America, but it's supposed to be weird. And if nobody talks about it, it's not like the problem goes away, it just never gets any closer to being solved. It just sits there, festering. So, go ahead, poke the wound. Make me think. Then run your fingers through my hair and make me feel like it's going to be OK somehow, but do it by singing a song or reciting me a poem, or making me help you do it.

They've got multimedia, too, and while it certainly adds to the overall experience, honestly, I'd be happy just to spend time in their company in a blank unadorned room with regular houselights. Scream Blue Murmur and Something's Gone Wrong in the Dreamhouse is one of the best ways you can spend an hour of Fringing this (or any other) year. I hope we don't have to wait another two years for them to wander into Minneapolis again, but you don't have to wait that long. They've still got performances Wednesday 8/10 at 8:30, Saturday 8/13 at 5:30 and Sunday 8/14 at 1:00.