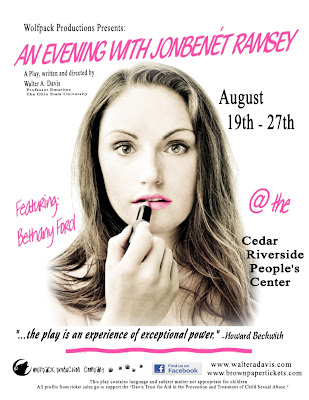 "There was a boy, once. It was different with him. It was like an island with him."

I have to admit, I was wary when I settled in to partake of the play, even though the premise was intriguing. If pre-school beauty pageant contestant Jonbenet Ramsey hadn't died, but survived whatever trauma befell her back on Christmas of 1996, what kind of woman would she become? Not only that, but what would she look like 14 years into our future, at the age of 35 (if she were still alive today, she'd just have turned 21)? In a series of monologues, the woman and survivor was not the bitter bundle of neuroses always on the verge of tears which I feared she'd be. This reimagined Jonbenet has taken all the right lessons from all the wrong turns in her life. She has a wicked sense of humor, and a great sense of theatricality. Which is not to say she's performing for us. Far from it. She steadfastly refuses to perform, and instead takes us behind the curtain of the performance that most people think constitutes their real life. She is sympathetic to those who must put up with the daily shocks and disappointments that put tiny dents in their dreams of a better life. But she's not going to coddle you. She uses the fact that she has your attention in order to engage you in a little chat about how to live life as if you're fully awake, which few of us do.

"I've learned how little there is to learn."

Davis' script is in love with words (this Jonbenet is a voracious reader) and with theater and, by extension, with life itself. Giving longer life and a spine of steel to a child forced into beauty pageants who was murdered at the age of six is something I honestly didn't think was possible. The idea of it, though admirable, seemed like it was destined to be just a writing exercise, or worse yet a stunt. But Davis manages to create a portrait of a woman whose present is informed by, but not defined or limited by, her past.

"Do you know how terrifying it is for me to want anything?"

I've seen Bethany Ford give a lot of emotionally raw performances, but this script allows her to do something quite different. Tears only threaten to come once, late in the game, and even then they don't fall. This is a performance of quiet strength, earthy humor, coiled sensuality, and more than just a little swagger. This isn't Bethany Ford finding her everyday self in a character. This is Bethany Ford disappearing into a character, and it's a hell of a lot of fun to watch, not to mention full of surprises. There were all kinds of quick, easy choices to be made here - both script and acting-wise. The production settles for none of them. Each blackout between monologues, you can almost feel the audience holding its breath. You're afraid to applaud and break the spell. You're just waiting to see what comes next.

"A wolf caught in a trap will gnaw its own leg off in order to be free."

A quick nod must also be given to Bethany's acting partner, the lighting design of Ariel (Pinkerton) Leaf. There are a lot of bold choices going on here - abrupt changes in levels and color of light, frequent use of shadow and complete darkness, even some canny usage of the houselights when Jonbenet directly addresses the men or the ladies in the audience. It's a design that draws attention to itself in the best way, by making you focus more closely on the script, and the theatricality with which this Jonbenet lives her life.

"To come upon a sentence that bites into you like a judgment. That's what reading is."

An Evening With Jonbenet Ramsey is exactly the kind of theater that on the surface makes me leery, but when I experience it, I'm mighty glad I went.

"I'm sorry. I couldn't breathe for a minute there."

You should push your own reservations aside and go, too.