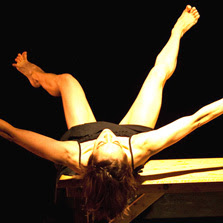 How do some people get the human body to *do* things like that? It boggles the mind.

As Mom is fond of saying, "I have trouble just walking across the room sometimes. These dancers, what they can do, they're amazing."

If this is what Tamara Ober and her talented dancer/choreographer friends can pull together as a last minute Fringe show with just three weeks' notice, it's almost not fair to anyone else imagining what they could do if they actually had time to plan.

Let's just get this one out of the way... FLESH is also truth in advertising. Flesh in all caps indeed. There is more taut, finely muscled flesh on display here than I've seen in a while (though this probably just means I don't see enough dance the rest of the year). Oddly enough, for me anyway, it wasn't a prurient experience. The human figure here is just beautiful to watch. Sure, you could sexualize it, quite easily. But watching these bodies move in space is more mesmerizing and hypnotic than anything else. They create stunning pictures that somehow transcend simple desire. Don't ask me how. Just watch for yourself and see if I'm wrong.

FLESH is five solo dance pieces performed by award-winning members of the Zenon Dance Company and the James Sewell Ballet.

Ober herself leads off with "One" (choreographed by Marta Ladjanszki). At first you're not even sure what you're watching. The lights come up slowly, and the human figure is contorted in a most unusual fashion. Tamara Ober's feet are bare and she's wearing ballet shoes on her hands instead, which is the first thing to throw off the eye. Turns out she's balancing on one foot and one hand, head down, with the second arm wrapped around her supporting leg. Her free leg is high in the air and for the first part of the dance the leg acts as an elongated neck, and the foot as the pivoting curious head of a beast, looking around at the audience. She holds this position for... holy crap, it just doesn't seem possible. Then she slowly unfolds and does the rest of the dance upright. Sometimes she artfully uses a ballet slipper clad hand to obscure her breasts, sometimes she doesn't bother. The whole routine is gorgeous.

Fascinating to me was the way many of these pieces played with our senses by using stretches of pitch darkness, and silence, or the sounds of a human body in motion rather than music. I'd notice myself almost holding my breath, for fear of breaking the spell. It was a great, unusual use of a kind of tension between audience and performer that I don't often experience.

A good example would be the next choreographer/performer Leslie O'Neill, who began her dance "These Years" hidden in a large claw-footed tub. She pounded on the sides of it in a slow, insistent rhythm until she herself slowly began to emerge into view. Her long hair obscured her face, cascaded over the side of the tub at one point. She scrubbed the tub vigorously, then laid back, legs spread impossibly wide. Slowly she seemed to me to be securing ribbons in her hair, but Mom really knew what we were watching. O'Neill was putting on a a slinky sequined dress hidden down in that tub. O'Neill started the dance with her upper body exposed but now when she stood to full height in front of a mirror by the tub, she was dressed for a formal night out. It was a great reveal, a nice simple bit of theater magic.

Choreographer/performer Laura Selle Virtucio, dressed in black, used the full width of the stage between two harsh white lights she would click on and off and redirect to cast her shadows in different directions for a piece entitled "Her Kind." She spent a period of time undulating on the floor then rose again to her full height, her movements - large or small - always vigorous and determined. The sound was an interesting blend of music and what seemed like animal sounds. At times, she even seemed to be using sign language. It was fascinating to watch her fill the space with different kinds of meaning.

In "Dressage" (choreographed by Judith Howard), dancer Nic Lincoln emerged slowly from a pile of blankets and fur to the sound of horses. It quickly became clear that he, too, was a horse. Then two imposing high heeled shoes appeared, as did Lincoln's costume - basically just a pair of fishnet stockings. OK, I begin to think, we're headed toward female impersonator territory. Nope. The music was there, the accessories were there, but those shoes were hooves. And every one of Lincoln's movements was that of a horse. In fact there were moments when you'd get a sudden picture in your mind, not of a human being, but of a horse, that's how evocative this movement was of its subject. Some people were inexplicably laughing at different points of this dance, which I could not figure out. Nervous laughter? Nothing he was doing seemed funny, or laughable. You're seeing a man's butt, honey, get over it. And that strut? You only wish you could pull off that strut. I'm not laughing at Nic Lincoln. That shit is gorgeous, and he could kick my ass.

Finally, choreographer/performer Amy Behm-Thomson's "secondaries" found her emerging in silence onto the stage in a long, flowing off-white lacy gown, cradling an enormous white bird/angel's (?) wing. After a while she gently placed it on the stage and then proceeded to sweep through the brightly lit space, accompanied only by the constant rush of the sound of wind. Sometimes she'd stand very still, moving her head slightly. Sometimes she'd be spreading her arms as if they were wings. Sometimes I actually though she might levitate.

Writing about dance is kind of ridiculous. It needs to be experienced. These five dancers did things I will never be able to adequately put into words. You really have to go see it for yourself. (And I obviously need to start seeing more of the work that Zenon and Sewell do year round because these dancers are amazing.) If there's a better dance show at the Fringe than FLESH, let me know about it because I want to go see that, too. But I'd be mighty surprised if such a show exists, because FLESH seems like an awfully hard show to top.