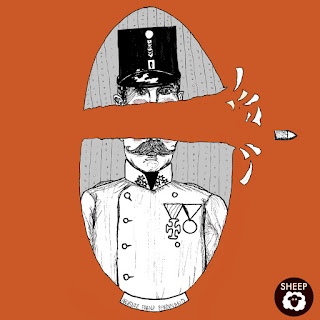 Sheep Theater is premiering a comedy that sits right next to Citizen as one of the best and most important pieces of theater I’ve see so far this year.  And you’ve got exactly 48 hours left to see it for yourself (and you really, really should). The Assassination of the Archduke of Austria-Hungary Franz Ferdinand seems an unlikely title and subject matter for a comedy but a comedy it is - just as smart and urgent and funny as other Sheep Theater offerings I’ve seen, whether they’re about a completely different sort of political assassinations (Tamburlaine) or the potential end of the world (Deus Ex Machina). I can’t believe this is this last we’ve seen of Franz Ferdinand, but for now if you want to catch it, you need to get over to the Southern Theater either tonight (Friday 4/7) at 7:30pm, or one of two showings tomorrow (Saturday 4/8) at 2:30pm or 7:30pm.

“We need guns.”
“Don’t worry.  There are people who will give them to us.”

The Assassination of the Archduke of Austria-Hungary Franz Ferdinand is the political spark that set off World War One in Europe. The play begins and ends with that assassination, first seeing only the assassins, lastly seeing their targets as well.  In between, it’s a brisk comedic sprint of less than 90 minutes not just putting a human face on the complicated jumble of geopolitics which made up this powder keg, but humanizing all sides of the conflict - making us both laugh at and feel for all the people in this story who are on a collision course they can’t, or won’t, avoid.  Office politics are just as likely to plague the rich and powerful as they do the revolutionaries struggling to change their lives.  Everyone has problems both huge and ridiculous, everyone feels deeply, whether it’s anger or love.  We recognize the absurdity in the play because it’s the same kind of absurdity we deal with today - only the names of the players have changed.  Little things lead to world wars.

Writer Joey Hamburger is starting to make the rest of the playwrights in this town look a little lazy.  The 2015 Minnesota Fringe Festival served up his play Deus Ex Machina, only six months later Sheep Theater was doing his adaptation of Tamburlaine, here we are a little over a year later with Franz Ferdinand (and in between Sheep did a 2016 Fringe remount of their riff on The Most Dangerous Game, and did a holiday show) (phew). I’d be less impressed if any of these were half-assed or outright sucked but I have yet to see anything Hamburger’s written that I wasn’t dazzled by.  The guy takes serious things and makes them hilarious.  While I’m busy laughing, he’s sticking a spike in my brain that keeps me thinking and re-thinking the topics around which the play revolves for days afterward.  That’s a gift.  I was scribbling down one line of dialogue after another madly the whole show, even though I knew full well I’d never be able to use them all here.

“We kill him.  We die.  They just bring in replacements.”

That said, Hamburger’s not working alone.  Sheep Theater’s key partners in crime include director Michael Hugh Torsch and producer Iris Rose Page (both of whom also frequently end up acting onstage, as they do here), and musical composer John Hilsen (offering up both a lush score and sound effects played live in performance).  Familiar faces in the cast I’ve seen in more than one Sheep production recently include Robb Goetzke, Tara Lucchino, Jacob Mobley, and Michael Rogers.  The program also credits Mobely, Page, Rogers, and Torsch, along with Matt McGuire, Drew Janda, and Jenna Rose Graupmann (who also did the great costumes for this production) as advisors on the script.  It’s a group effort, and that collective talent and smarts shines through in every scene.  Hamburger has a great team backing up his voice and vision. (I have to admit I’m a bit envious.)

“Look around you.  The war has already started.”

Gatherings of secret revolutionaries keep accidentally saying each others’ real names or taking off their masks.  Assassins are lousy at target practice or throw their bomb under the wrong car in the motorcade.  Rebels get hung up on why one of them insisted on wearing a cape to the assassination.  Government officials mock one another while abusing or confusing their interns and assistants.  Soldiers bored at a garden party decide to start shooting the only birds they see nearby.  A newsboy/mailboy (Page) travels great distances through interpretive dance with the assistance of a guy clad in a black body suit.  The deadly serious business of revolution often devolves into silliness.

“He’s not good at much.  They’re trying to get him involved in government.”

The thing that boggles my mind is the play has a multitude of scenes and over two dozen characters and yet I’m never confused.  Everyone’s identities and agendas are so clear - thanks to the writing, directing and performances - that I follow what’s actually a very convoluted story, very simply and easily.  There’s even a love story wedged into the middle of it all which takes up just enough room to help me care for ill-fated (and honestly, silly) Franz Ferdinand (Rogers) and his wife Sophie (Emily Wrolson), serving rather than hijacking the play’s main purpose.

“The next time we meet will be in the kingdom of heaven.”
“We’re all atheists.”
“I’ll put in a good word for you.”

It’s great seeing Tara Lucchino in the role of lead assassin Gavrilo Princip.  Her righteous fervor gives the rebel cause the fire and humanity it requires for us to see them as something other than criminals.  Sheep Theater regularly puts women in positions of power in the story, as they do here, even if that means they’re putting what would be a traditionally male role in an actress’ hands instead.  It’s a welcome strategy to keep a historical piece from turning into a play about a bunch of interchangeable white guys.  Lucchino is joined in the assassination plot by characters portrayed by Hamburger, Page, Nick Saxton, and Mike Merino, while Rogers as Franz Ferdinand has backup on his side of the conflict from Goetzke, Mobley, Torsch, Wrolson, Madeleine Rowe, Matthew Saxe, and Josiah Thompson.  You need to see these people in action.

The Assassination of the Archduke of Austria-Hungary Franz Ferdinand isn’t some dry, dull, confusing documentary on stage, nor is it history hijacked in the service of a bunch of fart jokes.  Sheep Theater and Joey Hamburger run the story right down the middle - both deadly serious and patently ridiculous.  The tragedy comes from the human reality behind world events, the comedy springs from meticulous research (and the fact that humans are absurd creatures who are often their own worst enemies).

See Sheep Theater's The Assassination of the Archduke of Austria-Hungary Franz Ferdinand, and quickly.  Your experience is already going to be a bit different than mine.  My phone was dutifully turned off during the show, but when I turned it back on it lit up with new alerts.  20 minutes before the end of the show, the U.S. military launched a missile strike on a Syrian air base.

There’s a conflation of a conversation between Alice and the Cheshire Cat attributed to Lewis Carroll that sums it up by saying: “If you don’t know where you are going, any road will get you there.”

“We  seem to have made a wrong turn.  We need to put it in reverse.”

The Assassination of the Archduke of Austria-Hungary Franz Ferdinand has just three more performances at the Southern Theater, tonight, Friday 4/7 at 7:30pm, and tomorrow, Saturday 4/8 at both 2:30pm and 7:30pm.  You should be there.

“You have to distance yourself from people you’ll be invading soon.”

If you miss this, they, of course, have more coming right up: Counting Sheep - annual sketch show - Friday, 5/26 8pm - Strike Theater; Jimmy the Kid - next full length production - it’s about wrestling - July - Red Eye Theater; and Pinocchio - the one about the nose - 2017 Minnesota Fringe Festival.  Follow these artists.  I certainly will.