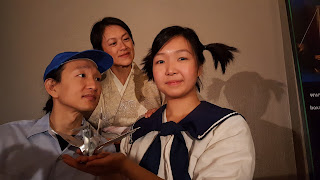 Green T Productions’ presentation of A Thousand Cranes is a simple but affecting piece of theater based on a true story whose message we probably always need to hear, but perhaps especially now.

A Thousand Cranes is adapted by Kathryn Schultz Miller from the book Sadako and the Thousand Paper Cranes by Eleanor Coerr about the all-too-brief life of a girl in Japan who continues to inspire the world in the cause of peace. Sadako Sasaki (Sarah Tan) was born in Hiroshima, Japan, two years before the United States military dropped the first atomic bomb on that city to force the surrender of Japan and the end of World War II.  (That’s not a spoiler alert, right?  That’s just history.) (Plus, nearly all of the following is in the program, so, no surprises.)

“I will take you to the mountains and the rivers of our ancestors.”

Sadako’s family (Catrina Huynh-Weiss and Ki Seung Rhee, both in multiple roles) lost her grandmother to the nuclear blast and had to rebuild their lives in the aftermath of the war.  Ten years later, at age 12, Sadako developed leukemia from exposure to radiation from the atom bomb when she was a baby.  She struggled to fold a thousand origami paper cranes before she died.  If you fold a thousand cranes, you get your wish.  Sadako didn’t live to finish her project.  Her friends, however, did.  Her friends also raised money to erect a statue of Sadako in the Peace Park in Hiroshima, built at the site of the bomb blast.  Every year, children from around the world send or bring in person thousands of paper cranes to place them at the foot of Sadako’s statue.  The statue is engraved with the wish, “This is our cry, This is our prayer, Peace in the world.”  (Green T is also gathering cranes to send to Hiroshima, and the audience can help add to the collection by folding some cranes of their own - handy instructions are included in the program.)

“Suddenly there was a tremendous flash of light that cut across the sky.”

It’s a beautiful and sad story which Green T director Kathy Welch (also responsible for the choreography and production design) and her actors keep simple so that things don’t get too melodramatic or overly sentimental.  When a story is this real, it doesn’t need a lot of embellishment, so Green T wisely underplays things.  All three performers do a fine job.  Sarah Tan does nice work at Sadako, a girl who doesn’t full understand why these things are happening to her.  Catrina Huynh-Weiss and Ki Seung Rhee juggle their multiple roles well.  Rhee is particularly amusing as Sadako’s friend Kenji, who mocks Sadako by pretending to be first a turtle, then a frog.  Huynh-Weiss is most affecting as Sadako’s late grandmother, whose spirit visits and comforts the girl in her hospital bed.  Grandmother also guides Sadako to be with her ancestors when the time comes.

“We invite them to join us in the celebration of life.”

Death, particularly the death of a child, is tricky onstage.  It can feel manipulative if you’re not careful.  Here, Sadako’s journey starts out as just a fun trip with Grandmother, and transitions through ritual and dance to the revelation she is staying with her ancestors and not going back.  I heard a lot of sniffles in the audience toward the end.  It’s hard to be unmoved by a story with such simple, honest emotion.

“I have come to show you something.”

The intriguing thing about the play (and I’m not entirely sure how I feel about it) is that the script doesn’t dwell (in fact, it might never even mention) who dropped the bomb or the reason it was done.  We see a girl’s life cut short, we ask ourselves why, and it’s a short hop to the answer: she died because of us.  The United States of America was at war with Japan.  Japan had drawn the U.S. into the war by bombing Pearl Harbor.  But the two year old baby who lived in Hiroshima had nothing to do with that.  She was dead by the time she was barely a teenager because of the long-term effects of nuclear radiation.  When Japan didn’t immediately surrender after the Hiroshima bombing, the U.S. dropped another bomb on Nagasaki just three days later (and orders had been given for the bombing of two other cities, which thankfully weren’t considered necessary.  The surrender of Japan came soon after the second bombing.) The United States of America is the only nation (so far) to ever use a nuclear bomb in wartime.  The world prays we all keep it that way.

“What did you wish for, Sadako?”

A Thousand Cranes is brief, just an hour, and its symbolism, ceremony, and use of puppets, music (by Miriam Gerberg), dance and shadow are a great (and gentle) entry for the children in the audience into discussions of larger issues like war and death.

“My home was called Hiroshima.”

Fold a crane, by all means, but then hold your government accountable for the people they’re killing in your name, for the humanitarian aid they don’t send, for the refugees they refuse to take in.

We killed Sadako.  And we get to sit and watch and be inspired by her story.  Which is, honestly, more than a little obscene.  But better to face the consequences of the things we do than pretend they didn’t happen.  War has human costs, and not always on the battlefield.  Sadako’s story is only one example of those costs.  Thanks to Green T for reminding us of that.  A Thousand Cranes performs at Dreamland Arts through April 14, 2017.