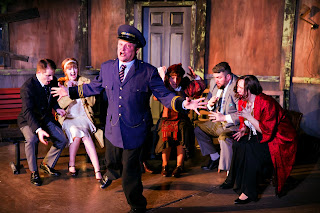 The Ghost Train is apparently a hole in my theatrical knowledge.  The play, written by English playwright Arnold Ridley, has been around since the 1920s and been regularly produced on stage, and repeatedly adapted for film but I was unaware of it until Mission Theatre Company and Wayward Theatre Company teamed up to do their own production, staged in The Minnesota Transportation Museum.  An old train museum is the perfect place for a play like The Ghost Train.  The museum itself is the old Jackson Street Roundhouse.  It serves as the final resting place for multiple examples of old train cars, glimpses into the transportation of the past.  My grandparents would have loved this place.  My mom still would.  After hours, just before the sun goes down, the museum provides the right kind of creepy ambience to get you in the mood for an old potboiler like The Ghost Train.

“Just a sign falling down.  Nothing supernatural about it.”

So, points for location.  It’s also easy to see why the play endures.   It’s basically the template for the plot of every Scooby Doo episode ever written.  Something supernatural and scary, perhaps even dangerous is going on.  Our heroes get swept up in it.  The longer it goes on the more dangerous and supernatural the situation genuinely seems.  In the final moments, a series of revelations unmasks the very human cause of all the consternation (“And I would have gotten away with it, too, if it hadn’t been for you meddling kids!”).  Mystery solved, everything’s perfectly normal after all - OR IS IT?!  That’s Ghost Train.

“There’s hardly a home in America where someone hasn’t died.”

You have to be willing to be in the spirit of things to enjoy The Ghost Train (no pun intended).  In many ways, it’s a creaky old play (it’s just 6 years shy of its 100th birthday at this point).  The script has “community theater” written all over it (I don’t mean that as an insult, just an assessment of its usual place in the current theater landscape).  Large cast, accessible plot, old school gender roles, just ambitious enough to be challenging from a production standpoint, but nothing that’s going to rock the boat content-wise, and because it’s British from the 1920s, super white.

“I took the gypsy’s warning.”

So what are Mission Theatre and Wayward Theatre up to here?  Because they’re not doing a basic production of this play by any means.  I can see in my head any number of straightforward, by the numbers productions of this play being done.  They wouldn’t be exciting but they would be entertaining.  Mission Theatre and Wayward Theatre are swinging for the fences in a big way with The Ghost Train.  And that’s largely due to the skillful (and pointed) direction of Sarah Nargang and her pack of enormously overqualified (for this material) actors.  This Ghost Train is presented in a highly stylized way of acting that is so far over the top it almost brings you back down the other side again.  It feels like it must be absolutely exhausting for the performers, and at the same time kind of a treat to just let loose like that.  Because everyone is permitted to be very BIG at all times.  There are no low gears in this play, everyone’s in high gear right out of the gate.  It’s hard to maintain that level of energy for a full evening but this cast delivers and doesn’t flag.

“They should put poison down for you.”

Six strangers are stranded in a rundown train station off the beaten path when their train is unexpectedly interrupted on its journey: longtime bickering married couple, Elsie and Richard (Andrea Rose Tonsfeldt and Michael Kelley); a pair of newlyweds, Peggy and Charles (Nissa Nordland Morgan and Vincent Hannam); an old spinster (complete with birdcage), Miss Bourne (Jane Zilch); and an annoylingly chipper extrovert named Teddie (Tim McVean).  They are all informed by the station master (Edwin Strout) that the train station is haunted, so it’s probably not the best place to spend the night.  No trains run anymore at night because of a horrible accident back in the day.  The only train running after dark is the ghost train, and to look upon it means death.  It’s all downhill from there, really. The Ghost Train isn’t a play with a high body count, but it’s got a lot of shocks and surprises in store.  These are increased when another unhinged victim of the ghost train appears on the scene, the high-strung Julia (Samantha V. Papke) accompanied by her concerned father Herbert (William P. Studer) and doctor/boyfriend John (Leif Jurgensen).  Two other fellows named Smith (Jason Kornelis) and Jackson (Sam Worms) get in on the action but to go into too much detail about them would be a spoiler.

The high intensity of the cast turns everything up a notch.  This intensity is matched by the design team’s evocation of our title character the ghost train.  Technical director Dietrich Poppen, sound designer Peter Morrow, and electricians Kevin Opatz and Rachel Elliott worked together with stage manager Elle DeYoung to orchestrate a pretty impressive effect in this found space.  The actors and director also help sell the big moments in a big way.  A quick nod must also be given to costume designer Krista Weiss and hair/make-up designer Anneliese Stuht for giving everyone on stage that period piece look to let us know we are out of our own time.  The arch acting style also allows the production to wink every now and again at the 1920s worldview of the play (women can feel safe with men there to protect them, drunk old women are hilarious, oh that single young man certainly is “colorful”).

“I am the devil’s granddaughter.”

The Ghost Train is clearly a labor of love.  The combined efforts of the Mission Theatre and Wayward Theatre teams embrace the play in a big bear hug.  They aren’t the least bit embarrassed by any of it.  They want the audience to love the play just as much as they do.  They want the audience to have just as much fun watching the play as they have fun performing it.  They want to give you a few good laughs and a few good scares and send you on your way having been thoroughly entertained.  Is The Ghost Train going to change the world?  No, but it’s not trying to.  It’s an old yarn that’s still holding up pretty well at almost 100 years old, and after seeing this production, I can’t argue with these theater companies deciding to team up, dust it off, and take it out on the tracks one more time.  If you want some high energy, low stress fun, The Ghost Train is your ticket. (runs through April 15, 2017)