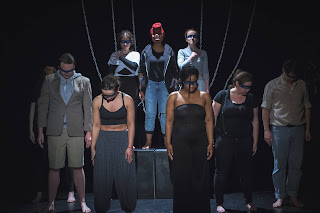 It’s a challenge to make Greek tragedy feel current, but Uprising Theatre Company has cracked the code with their current production of Aeschylus’ Prometheus Bound. Of course, it helps to have an adaptation with a modern feel to it, here provided by translator Bryan Doerries, excerpted from his book All That You’ve Seen Here Is God: New Versions of Four Greek Tragedies.  It also helps to have a director with a modern vision of the story, and director Denzel Belin really delivers on that score. Uprising Theatre has also yoked the production to discussions and partnerships with local organizations dealing with the prison population, and the quest for criminal justice reform - particularly addressing the all too common use of solitary confinement as punishment. I thought any or all of these 21st century approaches might feel like a stretch, but surprisingly they all pay off.

“These things were all decided long ago.  I saw them coming around the bend.”

This is probably because story of Prometheus has always been one of a person doing the right thing even though it flies in the face of the current world order and those in power.  Doerries’ adaptation doesn’t change any of the names or relationships involved in the mythology, but stories of power and its misuse continue to resonate across the centuries.  Pick a leader, any current leader, with whom you have disagreements, and discussions of the god Zeus here sound awfully familiar.  The script doesn’t throw around the name Zeus so much as it does terms like leader, ruler, father, etc., so tying the play’s struggles to the present day isn’t hard to do.

“The words of an angry father must always be respected.”

Prometheus (Shahd Elkhier) has defied the rules of her fellow gods and given the secret of fire to humankind.  This will make humans a little harder for the gods to manage, and to say Zeus - leader of the gods - is displeased by this would be an understatement.  (I just have to stop for a second and applaud the brilliant choice to give the role of Prometheus to a woman of color. Having your hero constantly referred to with the pronoun “she” is very refreshing.  Elkhier is great in the title role and defiantly holds the show together, in the face of all her characters’ many tormentors. The cast as a whole is largely female with a number of actors of color and that, too, is a nice change of pace from the standard “theater for white guys” that classical plays often become.  This ensemble does fine work with both the physical and text aspects of the production.)

“At last we’ve reached the ends of the earth.”

Prometheus is taken to the ends of the earth by Kratos (Missy Watson) and Bia (Yvonne Freese), who task Hephaetus (Janay D. Henry) with chaining up, shackling, and driving spikes into Prometheus’ body so she is unable to escape (no stage blood, just convincing physical work by the actors, the squeamish like me in the audience can relax. The torment is no less real, however).  Prometheus is not completely alone, though, as a pair of sympathetic chorus members (Fernanda Badeo and Kendra Yarke) keep her company.  There are also visitors - Oceanus (Damon C Mentzer), Io (Emily Rose Duea), and Hermes (Ronald R Giroux) - who each in their own way plead with, cajole or threaten Prometheus to try and get her back in line, perhaps to even help lighten her prison sentence.  But Prometheus remains resolute, unshakeable in the feeling that she has made the right decision.

“Be careful who you groan for or you may end up groaning yourself.”

Director Belin’s choice for the look of the show mixes modern clothes in blacks, whites and beiges with eye masks that give a nod to Ancient Greek theater without obscuring too much of the actors’ faces.  The decision to open the production with an extended sequence of movement which is symbolic rather than literal, with its own visual refrains, helps lay the foundation for later physical work which will allow the actors to not be constrained by the imprisonment of the title character.  The simplicity and starkness of the setting - black boxes, coat racks - makes things like the white chains which bind the hero or abrupt lighting shifts to deep red really stand out. It also allows the actors and their story to hold the audience’s full attention without distraction.  Less here really is more.  (It would be easy for any of this, taken too far, to slip into parody, but the whole team works hard to keep the story grounded.)

“It is painful to speak, but also to remain silent.  Either way, I lose.”

In fact, the only place this high contrast shifting in both performance and visuals doesn’t quite work is the very end. There have been so many declarations and so many abrupt shifts in the light that when the final line hits and the lights go dark for the last time, it’s not entirely clear the show is over until the actors shuffle into place for curtain call.  The production only clocks in at about 70 minutes.  It could afford to take just a tiny bit more time with that final image so the audience is clear that this is the last exclamation point.  Really give Prometheus’ last words to us a moment to sink in before you yank us back to reality.  As I said before, up until that point the strategy of sudden shifts works.  The end just needs something a little different to set it apart.

“My heart rattles inside its tiny cage.”

The other useful thing about a short production is Uprising Theatre can directly engage its audience after the show in addressing the issues with which the production intersects.  Uprising company members talk to the audience immediately before and after the show to make them aware of the community partner organizations associated with the production.  The organizations all have tables in the lobby, and actual action items audience members can commit to that evening.  There are also audience discussions following each performance, addressing not the process of putting on the show, but rather the themes and subject matter that bubble up from it.  (Sadly, I needed to head out and get started on the review, so I missed the discussion this time around.  But even I could stop by the tables in the lobby, buy a couple of books, and then drop them off with the folks working for the Women’s Prison Book Project elsewhere in the lobby - you can also feel free to bring a book with you to donate, more details at www.wpbp.org.) Uprising’s other community partners for this production are the Minnesota Freedom Fund (a Minnesota community bail fund - www.facebook.com/mnfreedomfund/), and Minnesota Neighborhoods Organizing For Change (www.mnnoc.org).  (Don’t worry, nobody strong-arms you here.  You’re free to do as much or as little as you want, no guilt trips.  But if you’re itching to take action, they’ll make it easy for you to do so.)

“You think your house is built from unbreakable boards.”

Uprising Theatre Company’s motto is “Stories To Change The World.”  A tall order, but they seem determined to make theater an active, relevant thing.  I can get behind that.  Productions like Prometheus Bound make it easy to see how they might do it. (I’m looking forward to whatever Uprising has on tap next, and getting a chance to stay for the discussion this time. And, honestly, how often do you find yourself thinking that about a post-show talkback?) (runs through April 29, 2017 at the Phoenix Theater)