Review - The (curious case of the) Watson Intelligence - Park Square Theatre - Head Over Heart, or Heart Over Head? - 4.5 stars 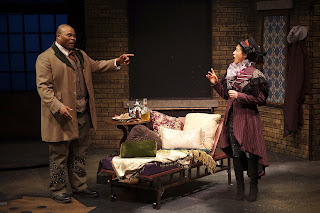 More than nearly any other script I’ve encountered in recent memory, Madeleine George’s play The (curious case of the) Watson Intelligence puts on stage just how terrifying love can be. And no, not the “is he going to kill me?” kind of terrifying.

“The world is full of people who could just ruin me with love.”

It’s the terrifying feeling of free-fall that happens when you turn your heart over to another person for safekeeping, when your emotions rise and fall on how close or far away from them you physically are and how long it’s going to be until you can see them again, when spending every possible moment you can with them completely upends the carefully ordered schedule by which you regularly live your life - and you don’t care.

“It is not a weakness.  It is the first condition of human life.”

Some people are built for that kind of abandon. Some people aren’t, even though they wish they were. If you’re lucky enough to form that kind of connection, and then it’s ripped away from you - forget it, you’re a wreck, and will be for a long time. That’s, of course, if you’re doing it right.

“Nobody can answer the calls you make from hell.”

Park Square Theatre’s production of The (curious case of the) Watson Intelligence is doing it right.  Director Leah Cooper and her tireless trio of talented actors - Kathryn Fumie, H. Adam Harris, and Adam Whisner - careen through George’s multi-layered, time-traveling story with nary a hiccup. They are aided in this task by a great design team - Lance Brockman (Set Designer), Katharine Horowitz (Sound Designer), Michael P. Kittel (Lighting Designer), Kathy Kohl (Costume Designer) and Sadie Ward (Properties Designer). This team manages to house multiple timelines and locations in what could be described as a single brick warehouse space where every nook and cranny has different personalities and purposes. The whole thing has a steampunk sensibility to it - mixing past and present visually as well as narratively. Shout-out to the stage management team of Amanda K. Bowman and her assistants Samantha Diekman and Rachel Lantow for keeping the whole thing moving so smoothly from one place and time to the next that the audience could easily forget how challenging all this is.

“The longer I know you, the less I understand you.”

So what’s it about? H. Adam Harris plays Watson, Kathryn Fumie plays Eliza, and Adam Whisner plays Merrick. In each time period, their characters are different people, but they always have the same name. Watson is Alexander Graham Bell’s devoted assistant who helped him to create the first telephone. Watson is Sherlock Holmes’ trusty sidekick, who takes on a case of his own. Watson is a computer with artificial intelligence designed to do everything from win game shows to help humans better cope with life. Watson is a tech support nerd who inadvertently embarks on a passionate love affair with the ex-wife of a man who has hired him to spy on her. He returns the money and keeps seeing the woman.

“There isn’t a part of me that you haven’t touched.”

That woman is Eliza, who designed the computer with artificial intelligence, whose distress prompted Dr. Watson to take action, and who interviewed Bell’s assistant Watson about the invention and relationship that changed his life.

“I will have solved the world’s oldest problem.”

The ex-husband is Merrick, suddenly abandoned by his tech-savvy wife, unable to understand the reason why - and so sick of government incompetence that he decides to run for office himself in order to dismantle government from the inside.  Merrick is also the target of Dr. Watson’s investigation - plotting to replace his wife with something more compliant to his needs. Extra points for Whisner here because he is, once again, unafraid to be perceived as a couple of different styles of complete and utter self-involved jerk.

“This is the world we want to live in for now, apparently.”

You’d think this could get hopelessly confusing - especially when the actors begin morphing from one character to the next sometimes during the same extended speech, stepping from one costume/character/plotline directly into another without missing a beat. But thanks to the Park Square team hard at work supporting this story onstage and off, the play’s train of thought never jumps the track. (Or if it does, we easily jump right along with it).

The (curious case of the) Watson Intelligence is a dazzling dance of word, thought, feeling, light and sound.  It’s uniquely theatrical as well. You couldn’t feel the full impact of the roil of emotions these people are swimming in if it weren’t happening live in front of you. The subtle shifts between timelines and storylines wouldn’t work as well in any other context. This is the kind of story theater was designed to tell - to people sharing the experience together, breathing the same air as the actors out there in the dark.

“I don’t think I understand what you mean but I’d like to.  Can you give me a nudge in the right direction?”

The only stumble here is minor and, honestly, it’s hard to know whether the blame lies with the script itself or the production. Part of the story hinges (as a whole segment of pop culture does) on both characters and audience finding a neurotic intellectual person to be endlessly fascinating and endearing, rather than exhausting to be around. If, like me, you often feel like the latter option around those kinds of people, then parts of The (curious case of the) Watson Intelligence will be a heavy lift.  If the neuroses were as well-examined as so much of the rest of the emotional life of the play is, then I might have less of a problem with it. But huge decisions in this play pivot around an emotional core that feels underdeveloped rather than grounded in fully realized character, and thus the inevitable outcome doesn’t feel as inevitable as it could.

“It’s starting to look like Victorian England around here.”

Also early on, the characters all sound a little more robotic than maybe they need to - which can be a little confusing and off-putting in trying to get the story off the ground.  The affectation burns off later on, but I’d be hard pressed to explain why it was there in the first place or what exactly caused it to finally fade away.

“They all think they know who the story’s about.”

I want to commend this production for something, but in calling it out I feel like I’m feeding into the idea of making something a big deal that - when it’s as common as it should be - shouldn’t be a big deal at all. That’s the casting of H. Adam Harris. If you do a random search online of photos of the productions of The (curious case of the) Watson Intelligence, one thing you’ll see a lot of is white actors. One thing is don’t see a lot of is actors of color. Uptight people might bemoan the fact that “traditionally” or “historically” Dr. Watson in the Sherlock Holmes stories or Bell’s assistant Watson were not people of color, they were white. Is their whiteness essential to the story? Nope. Then if you’ve got an actor as good as H. Adam Harris, why shouldn’t you put him in any role you can, so we can see more of him in action? While watching the show, this didn’t even occur to me. It only crossed my mind afterward, and that made me happy. So I figured someone should commend the Park Square team for doing something that, honestly, should already be such common practice that giving someone an extra pat on the back for it seems silly. We’re getting closer to that day, but unfortunately it isn’t quite here yet.

What is here is a really lovely production of a funny, smart, sexy, and heartbreaking play, so you should to go see The (curious case of the) Watson Intelligence at Park Square, and quickly (runs through April 30, 2017)

(H. Adam Harris as Watson and Kathryn Fumie as Eliza in The (curious case of the) Watson Intelligence - photography by Petronella J. Ytsma)