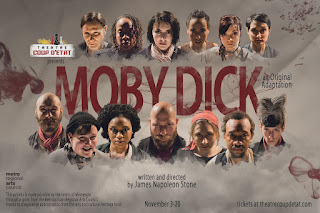 Adapting Moby Dick for the stage has often felt to me like it could well be as foolhardy as Ahab’s quest for the white whale (and title character) of the story.  But I’ll be damned if Theatre Coup d’Etat hasn’t pulled it off.  I can understand the lure of it, of course.  It’s a big sprawling story from a celebrated novel.  It hails from the past, a different way of life now lost to time (since we - thankfully - don’t hunt whales any more, after hunting them nearly to extinction during the era of Moby Dick).  Men sailing the high seas in search of adventure, etc. etc.  But how do you bring the ocean onto the stage?  How do you bring a ship onto the stage?  How do you bring a whale onto the stage?  Turns out you just need to get the right costumes, the right actors, some boxes and ropes, a band to churn out some sea shanties for you, and ask the audience to play along with their imagination.

“Sometimes you get the whale, sometimes the whale gets you.”

Writer/director/producer James Napoleon Stone has whittled down Herman Melville’s epic novel into a manageable human form, which in itself is no small feat.  But I think the casting choices here are the real key.  Adaptations of Moby Dick (stage, film, TV, you name it) in the past have traditionally been mostly a bunch of white dudes sailing around the ocean killing things.  Theatre Coup d’Etat deliberately confounds that expectation and has gathered together an ensemble of 13 in which women outnumber the men more than two to one, including the central figure of Ishmael the narrator.  Actors of color also figure significantly in the cast, though mostly in supporting roles.  Ahab is still a white dude.  But for a change, thanks to Adam Scarpello’s compelling performance, I actually feel like I understand Captain Ahab’s obsession.  He doesn’t seem like a stone cold lunatic from the jump, so there’s somewhere for the story to go.  I also have to say that Scarpello here is almost unrecognizable to me (and I’ve worked with him before on one of my own plays).  There’s a partial physical transformation involved, but mostly, it’s just acting.  He disappears into this role in the way good actors often do.  It was a bit unsettling to watch, but also really impressive.

“Better to sleep with a sober cannibal than a drunken Christian.”

Ishmael (Eva Gemlo) takes to the sea as a sailor whenever life starts to feel too small.  On the island of Nantucket, off the coast of Massachusetts in the mid-1800s, she signs on with the whaling ship the Pequod.  She bonds while sharing a room in the overcrowded hotel of Peter Coffin (Sue Gerver) with celebrated harpooner Queequeg (Antonia Perez).  The Pequod’s other crew members include first mate Starbuck (Kayla McCarthy); a functional alcoholic appropriately named Flask (Craig James Hostetler) who leads his fellow sailors in song to keep their spirits up and their tasks at a steady rhythm; Flask’s trusty sidekick Stubb (Meagan Kedrowski); as well as Daggoo (Michael Terrell Brown), Boomer (Lauren Diesch), Elijah (Kelly Nelson), and Tashtekova (Jacleen Olson).  There are a myriad of accents among the crew that were frankly a little bewildering, mostly because I’m not entirely sure they were necessary, unless it was just to make sure everyone was vocally distinct and didn’t blend together.  There wasn’t a lot of time spent exploring different cultures, just the culture of the ship and the job of whaling.

“The ocean is merciless.  It has no feelings.”

Captain Ahab (Scarpello) himself doesn’t appear in the present action until late in act one (and the script and production build the anticipation nicely).  However, Coup d’Etat has tacked on a prologue before the book’s famous opening line to give us a dumbshow of Ahab’s first encounter with Moby Dick (in part, so we know who we're looking for later).  The whale took half of one of Ahab’s legs with him.  Now in addition to shipping out to kill whales for their oil, Ahab also wants to take more than a piece out of Moby Dick in revenge for that lost leg.  There’s a whole sequence after the introduction of the crew (again, before Ahab’s appearance) where the sailors suffer the presence of a dilettante wannabe captain they call Peleg (David Wasserman), who contents himself with inspecting the crew and then goes on his way (not ever intending to sail with them, just wanting his cut of the return on the ship owners’ investment). No disrespect meant to the actors, but after seeing the rest of the play, I’m not sure this character or this scene was necessary either, and since the first act does run just a bit long, it might be a place to look for a cut for future productions.  Powerhouse actress Siddeeqah Shabazz also makes a late appearance, here in act two as Captain Gardiner, in charge of another ship which had an ill-fated encounter with the white whale.

“I must bring my heart back home.”

There are so many songs sung in this treatment of Moby Dick that it’s almost a musical.  Music Director Jamie White Jachimiec has gotten the full cast to bellow away heartily at all these old songs of the seafaring life and they go a long way to grounding the audience and the story in its time period.  They also bond the ensemble as a crew vocally, and make the audience a lot more inclined to like the sailors and the story they have to tell.  Jachimiec also plays the cello leading the musical quartet backing up the cast, alongside Anna Leverett on violin; Alison Keller  on violin, flute, percussion, and bass (also did some of the orchestrations); and Ze'ev O'Rourke on the bodhran.  The music and the actors’ enthusiastic singing really make the play resonate on a deeper emotional level throughout.  It helps the play avoid the trap of so many Moby Dick adaptations, getting bogged down in endless narration.  Melville’s writing makes for good reading, but not always good theater.  Stone’s adaptation also keeps the dialogue and theatrical scenes flowing one into another.  (A nod should probably go out also to dramaturg Lanny Langston, as I know the script went through several rounds of readings and rewrites to get it rehearsal/production-ready and I’m sure their input must have helped.)

“My soul aches for something I can’t put a name to.”

Stone’s direction of the piece, assisted by Kevin Fanshaw, and aided in a big way by movement captain Kelly Nelson, never forgets that this is a piece of theater, rather than the reading of a novel onstage.  The ensemble’s creation of the ship, and the various elements of the whaling life, even the whales themselves, are inventive and convey the story and actions cleanly and clearly.  It’s an admirable piece of stage work.  As I said at the top, a lot of the heavy lifting in terms of establishing period is done by the costumes, from Lauren Diesch and assistant Anne Brown.  The look is consistent and distinctive and it works incredibly well.  The establishment of the sea and other hostile natural elements gets a big boost from Mark Kieffer’s lighting design. And if you don’t have a good stage manager keeping all these balls in the air, a production this complex just doesn’t work so kudos to stage manager Quinn Forrest Masterson.

“Heaven take you, Starbuck.  For there'll be no room in hell when I go.”

Theatre Coup d’Etat frequently gets me to care about stories and characters that surprise me.  Their production of Moby Dick is no exception.  There’s a whole lot of bold artistic choices and clever storytelling going on here, and the music and tightly knit ensemble work from all the performers make for compelling viewing.  I didn’t see myself ever enthusiastically recommending yet another production of Moby Dick (or Hamlet, for that matter) but this seems to be the fall and winter for proving me wrong. (runs through November 20, 2017)