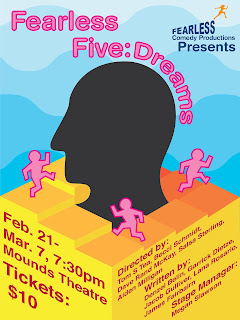 I’m a little embarrassed to admit I hadn’t heard before about Fearless Comedy Productions’ annual new play festival, Fearless Five.  This is the fourth year they’ve been at it, and it’s a great concept.  They get five writers (sometimes theater artists new to playwriting) to create short plays around a common theme, and then put them in the hands of new directors, with access to more seasoned writers and directors to offer mentorship and advice.  The scripts all share a common cast of six actors, many of them multitasking across four of the five stories.  So everyone involved gets to stretch their talents and try something new.  Previous years have had the theme of Harbingers, Conspiracies, and Noir.  This year, it’s Dreams.  Producer Tim Wick has gathered a game group of artists who really dive into the material, creating an evening that builds from one play to the next, providing an impressively solid overall evening of theater.  Fearless Five: Dreams is a lot of fun to watch. (But be careful, as the cast frequently reminds the audience throughout the evening, the actors are watching you, too.)

“Something other than fighting fires with living fish.”

The night kicks off with “Dream Job” by James Lyndon Fairbairn, directed by Salsa Sterling.  It’s a brief amusing curtain-raiser on the concept of the evening.  Ashley (Maretta Zilic) is called in for a cryptic job interview with Paris (Adrienne Lee), soon learning that she will be on a team that builds dreams for other people, a team that includes an elementary school teacher who was her first crush,
Mr. Bradley (Jason Kruger), and a guy named Adrian (Kaz Loren), who she made eye contact with on the bus the other day.  Hey, you have to put the random ingredients of your conscious mind to use somehow, right?

Next up, Lana Rosario’s short play “Canoe” (directed by Becci Schmidt) really dives down the rabbit hole of constantly shifting reality.  Soon after it begins, the audiences realizes that Nic (Maretta Zilic) isn’t really waking up from a dream at all, but keeps waking up inside a dream.  Nobody seems particularly disturbed by the concept, even as Nic’s boyfriend Mac (Kaz Loren), sister Sam (Adrienne Lee), and co-worker Chris (Ari Newman) keep altering their roles within her workday life.  One minute someone’s bringing their pet alligator to work, the next moment one of the cast members is actually becoming an alligator themselves.  Shared costumes among the supporting players in Nic’s dream make things even more amusing as the absurdity builds.

“You’re not a goddamn rake, you’re a living being.”
“I am neither.”

To round out the first half before intermission, it’s time to visit the convention of many a sci-fi tale in which a robot is treated so well by its human owners that it starts to act like, wish, even dream that it was human, too.  Writer Jacob Gulliver is teamed up with director Tom S. Tea on  “Apple Picker.”
Robin (Breanna Cecile) isn’t fond of the way technician Devon (Adrienne Lee) is handling Robin’s robot farm hand (Ari Newman), treating it more like a machine than one of the family.  So it’s time to call in the robo-pyschologist, Bobby (Kaz Loren).

“And then the Roanoke colonists decided to follow their new masters and build a new home underground.”

Kicking off the second half is “A Sheep In The Hand Is Worth Two In the Barn” (written by Garrick Dietze, directed by Aiden Dustin Milligan).  Here the full cast of characters in the story is supposedly presenting a dream in the collective mind of the audience.  “Sheep” is the densest script of the evening, with so much going on and so many layers, that it probably bears more than one look and more than a little bit of study on the page.  Though still quite funny, it’s riffing off the classic sibling rivalry tale of Cain (Ari Newman) and Abel (Jason Kruger) from the Old Testament of the Bible, so the threat of violence, however comic, is constant.  Plus there’s a wacky murderous puppet show and role-playing bit of a dream within the dream, employing support from Cain and Abel’s wives - Aban (Adrienne Lee) and Azura (Breanna Cecile) (who, to be honest, I didn’t recall, but they seem to appear in religious traditions other than the one I grew up in).  There’s a lot of “wait a minute, are they talking about what I think they’re talking about?” and “whoa, did I miss something?” that don’t seem to be mistakes so much as misdirection.  And there’s a zig-zagging series of shifting fortunes, alliances and power that always keeps the story one step ahead of where the audience thinks it might be going.  Darker comedy, but comedy nonetheless.

“It’s a bisexual joke.  I guess you only got half of it.”

Capping off this year’s collection of shorts is writer Denzel Belin’s smart, hilarious and heartwarming “Oz,” directed by Dave Rand-McKay.  Even though it’s set in a gay bar, our narrator, the lesbian bartender Dorothy (Maretta Zilic) assures us that “unlike a lot of gay media, this is a happy story.”  There’s plenty of pointed cultural commentary lurking just under the surface of the wickedly fast-moving one-liners that are busting out of this script in all directions.  I couldn’t keep up with all the memorable lines I wanted to write down as the story just zipped merrily along in front of me.  But these jokes have the added benefit of being grounded in the reality of the characters, which makes them much funnier than a bunch of random gags would be.  Dorothy’s got a couple of regulars on Wednesday afternoons - Remy (Kaz Loren) and Ian (Jason Kruger) - who just come in, order drinks, and stare shyly across the bar at one another without speaking.  Of course the bartender hears both sides of their unconsummated fantasies, so Dorothy decides to take matters into her own hands to try and make their daydreaming into reality.  Every one of the pieces in Dreams had its selling points, but I’d be willing to give the whole night five stars just on the strength of the writing, direction and performances in “Oz” alone.  It’s a great way to end the show.  More from all of the artists involved in this one, please.  We could use more queer positivity these days.

“I remember that I am in a dream and I don’t need permission to touch myself.”

Compliments as well to the four people helping manage the complete Fearless Comedy experience of the full production - stage manager Megan Slawson guiding each performance from start to finish, with Steffen Moeller on Technical Direction and Design, Oversight Director Jena Young, and previously mentioned producer Tom Wick.  It’s not easy to put together an evening of brand new plays where there’s not at least one dud in the bunch, but every peculiar little dreamscape here has its charms.  And with “Oz” the evening ends on a real winner.  I wish every production sent me home with a smile like Fearless Five: Dreams does.  Treat yourself, go have a laugh.  (runs through March 7, 2020 at the Mounds Theatre).