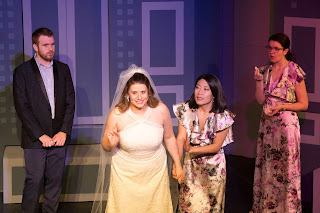 Just a quick note of appreciation as we start: As it continues to celebrate its 25th anniversary season, I’m grateful that Minnesota Jewish Theatre includes queer stories in its seasonal offerings.  It’s not a given with every theater in town, but whether it’s the thought-provoking Twilight of the Golds back in 2006 or the more recent charming musical My Mother’s LesbianJewish Wiccan Wedding in 2012, it’s nice to have it reinforced that LGBTQ people are part of the human (and Jewish) experience MJT chooses to depict on its stage.  And now we have Significant Other from playwright Joshua Harmon (whose play Bad Jews MJT produced back in 2016).  Jordan, the central character in Significant Other, isn’t so much a bad Jew as he is bad with interpersonal skills.  And therein lies the comedy of it all.

“When was the last time you had sex?”
“I don’t know. The Pleistocene Era?”


Jordan (Bradley Hildebrandt) is unintentionally watching life pass him by.  In the opening scene of the play, he’s attending his friend Kiki (Olivia Wilusz)’s bachelorette party, followed closely by her wedding, and by the end of the play he’s watched his friends Vanessa (Audrey Park) and Laura (Chloe Armao) get paired off as well. All this coupling, and friends creating new lives that aren’t as centered around hanging out with him, puts Jordan’s own anemic dating life in sharp relief.

“Have you ever been to a wedding?  They’re not fun.  They’re disturbing.”

Jordan is great at obsessing, not so great with following through using things like, oh, you know, face-to-face conversation. Jordan’s only meaningful relationship outside of his girlfriends is his grandmother Helene (Nancy Marvy), who keeps joking about suicide in unsettling ways.  (Don’t’ worry, it’s a comedy, even if, in these moments, it can get a bit dark.)  Paul LaNave and Tony Larkin round out the cast doing some seriously chameleon-like transformations, portraying everything from Jordan’s co-worker crushes to all the various husbands of his friends, in a way that makes you stop and go, “Wait? Is that the same guy?  Wow.”  Director Hayley Finn gets uniformly great performances out of the whole cast.

“Everyone hooks up in that store.”
“Not in the luggage department.”


There’s certainly love, affection and romance to go along with all the laughs in Significant Other, but it’s not a romantic comedy.  Playwright Harmon isn’t so much interested in pairing Jordan off with another guy as he is in trying to figure out what’s wrong with his leading man – what’s keeping Jordan from growing up and connecting with people beyond his circle of close-knit college friends as they move into full adulthood.  Body image, social media, faulty gaydar, people with their own personal baggage, lack of financial resources - all the usual suspects are present.

“Try to recognize when moments are about you, and when they aren’t about you!”

A special shout-out has to go to Bradley Hildebrandt as Jordan, who spends nearly the entire two-act play onstage without a break, unless it’s to quickly duck out and change his costume between scenes.  Jordan is an uncomfortable fellow, so it can’t be easy to inhabit his skin with no respite for the whole of the evening.  It’s a challenging role to keep from devolving into a sort of one-note pity party, but Hildebrandt finds the nuance, especially in his interactions with Chloe Armao as Jordan’s best friend Laura.  Armao and Hildebrandt in act two have the kind of bruising emotional fight that only the closest of friends can have, because they know all the places to do the most damage.  That scene is more heartbreaking than any romantic letdown that Jordan suffers at the hands of a man.

Michael Hoover’s set design with its many compartments, hidden doors and windows, and emerging bookshelf and bed attachments, partners with Todd Reemtsma’s lighting and Lisa Imbryk’s props to speedily move us around from scene to scene and location to location.  In a show where cheesy love songs are key, C. Andrew Mayer’s sound design delivers.  And Rubble & Ash’s costume design keeps everyone realistically costumed for a story stretching across a wide swath of time while also allowing the women in the cast to have some fun whether dressing up or down (as it should be). Also, I’m sure the many opposing gears of this production would grind to a halt without Samson Perry stage managing, so kudos to them for keeping things moving along at a spritely pace.

“Hearing you say I have obsessive tendencies makes me think I need to go to the veterinarian to be put down.”

Jordan isn’t always the best friend he could be, and he’s not an easy guy to love sometimes, but he’s never less than compelling to watch.  It’s frustrating but fascinating to see him get stuck in place as all three of his friends evolve in surprising ways, transformed by the effort of making space in their lives for someone new. Audrey Park and Olivia Wilusz are equally impressive as Chloe Armao, as all the women in Jordan’s life subtly become something more than the girls he met in college.  The friend who attended the show with me wanted Jordan to finally get over himself and dance at his friend’s wedding, even if he had to dance alone.  But I guess Jordan’s got some more growing up to do after the lights fade to black.

Thanks to Minnesota Jewish Theatre for staging something more than another story of impossibly pretty boys serially dating one another until they find a match (not that there’s anything wrong with that – I still need those stories every now and then, more than I’d probably care to admit).  Significant Other might not be a feel-good romantic comedy, but it might do us all some good to take a break from those for a minute and enter the life of someone whose mistakes we don’t want to make ourselves.  Significant Other is a funny cautionary tale, for the more complicated romantic landscape of 2020. (Significant Other runs through March 8, 2020 on the stage at the Highland Park CommunityCenter)