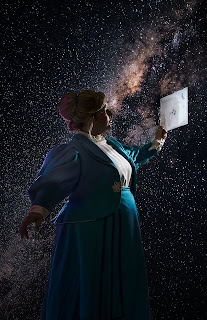 I know it’s only February, but I think it’s going to be hard for theater the rest of the year to top the experience I just had at Theatre Pro Rata’s production of Lauren Gunderson’s Silent Sky.  They’ve staged a play about astronomers inside an actual planetarium and the result is, well - the words glorious, enchanting and transcendent come to mind, for starters.  Gunderson’s words in the mouths of these performers just swept me away.  Giddy, is another apt way to describe my response.  This is the kind of thing live theater is made for.  It’s why it survives.  A script this good, in the hands of a director, cast and creative team this inventive, isn’t something you see every day.  If you enjoy theater, you really owe it to yourself to see Silent Sky.  (And if you haven’t set foot in a planetarium in a while, that immersive experience is something you should treat your brain to as well.  Words will fail me, but I’ll give it a shot.)

“You asked God a question.  And He *answered*.”

Silent Sky is based on the life and work of early 20th century astronomer Henrietta Leavitt (Victoria Pyan).  A woman ahead of her time, she put the calling of her career first, supporting the work of Harvard College Observatory, often causing friction when other duties of family or romance threatened to pull her off course.  The result?  Before women in America had the right to vote, her discoveries (including what would come to be known as Leavitt’s law) laid the foundation for science to measure the distance between Earth and the stars, to measure the size of the universe.

Gunderson has a poet’s gift for making something as potentially dry as science exciting, accessible and beautiful.  We understand Henrietta’s obsession with her work, and the struggle to find the key to unlocking the mysteries of the stars.  We understand the respect of her fellow female “computers” Annie Cannon (Amber Bjork) and Williamina Fleming (Sarah Broude), and why her mind dazzles her male Harvard colleague Peter Shaw (Carl Swanson) to the point he is so smitten he wants to take her on a European cruise.  Meanwhile, contact with her sister Margaret (Danielle Krivinchuk) keeps Henrietta grounded in the world outside of academic life, and sometimes even provides the inspiration she needs to crack things open and take her research to the next level.

“You have been the brightest object in my days since we met - and we work with stars.”

Partnering with the Bell Museum and their Whitney and Elizabeth MacMillan Planetarium was an inspired bit of site specific thinking.  Just being under the dome is one thing.  The size of the universe, a hint of the scale of the wider world beyond the story being told, is always present in the corner of your eye as you sit in the audience.  Also, because of the configuration of the space, the cast is always entering and exiting by the rounded sides of the planetarium space.  The story wraps around the audience from behind and pulls them in.

And then the projections on the dome kick in.  We get a cosmic opening monologue from Henrietta.  But she’s down to earth again pretty quickly, with wrap-around photo landscapes first setting the scene of the church or family home in Henrietta’s hometown.  Later we hit the campus of Harvard, or the deck of a cruise ship.  But when the stars return again, and the planets, and the galaxies, rather than overwhelm the actors or the words, they reinforce the size, the scope, the importance of the things Henrietta is studying.  They also give us just a hint of our own place in the universe, which I was surprised to find oddly comforting, and also kind of thrilling.  Because we’re not just an afterthought, we’re part of it all.  And human beings like Henrietta wrestled the universe into comprehensible form, even as the size of it expanded beyond all imagining.  So look what we can do, when we set our minds to it.  (Thanks to Dome 3D Immersive Media Solutions for the earthly locations, and to the Bell Museum Planetarium producers Sally Brummel, Sarah Komperud, and Thaddeus LaCoursiere for setting loose the universe above our heads.)

“I am out of time, but light has never let me down.”

Director Carin Bratlie Wethern has gathered a great ensemble of actors here, led by the fantastic Victoria Pyan as Henrietta.  You could not ask for a smarter, more passionate performer to anchor a story this big.  It would be easy for the display of the universe over our heads to overwhelm a play, but not when you put the words of a Lauren Gunderson closing monologue in Victoria Pyan’s hands.  And everyone around her is equally wonderful, whether its Danielle Krivinchuk as the sister who loves but struggles to understand Henrietta, because Margaret appreciates earthly life in a way that never quite satisfies her brilliant sister.  Or Carl Swanson, as the man who loves Henrietta but can’t quite find the will to wait for her, or keep up with her.  Or Amber Bjork as the wryly confident supervisor (and part time suffragette) who keeps Henrietta on track without getting all sentimental about it.  Or Sarah Broude as Henrietta’s other co-worker, and one-woman cheering section.  The complexity and challenge of the society and expectations of Henrietta’s day are made clear in the subtleties of basic human interactions.  No relationship exists without context, and the cast makes us aware of the nuances and unspoken consequences that lurk underneath every decision.  These five people are the whole world.  The actors deliver on playwright Gunderson’s magic.

“Hearts and stars can be blinding.”

It can’t have been easy to make a theater experience fit so neatly inside the environment of the planetarium so kudos all around to the Pro Rata production team.  Samantha Kuhn Staneart’s costumes do a lot of the heavy lifting of setting time and place.  Jacob M. Davis’ work on sound, Julia Carlis’ lights and the prop work of Jenny Moeller (assisted by Ursula K. Bowden), all stage managed by Clara Costello, help fill in the rest of the blanks we need for the performance in front of, rather than above, us.  It’s a useful reminder of how little theater really needs to tell a story (planetarium aside, of course).

“What you do outlasts you - sometimes.”

It is crazy to contemplate how much Henrietta accomplished, how much of the universe she brought down to earth, in a life cut tragically short by cancer.  (To paraphrase Tom Lehrer, it is a sobering thought to consider that by the time Henrietta Leavitt was my age, she had already been dead two years.)  Her work continues to live on, of course, and provided the foundation for countless other scientists to build upon.

“Nothing is ever really lost.  It just shifts.”

One of the many great things playwright Lauren Gunderson does with her continued focus on bringing female figures in the scientific world to life on stage, is it makes someone like me realize that my education barely scratched the surface of all the human stories to be told, and that a lot of people, for various reasons, can get left out of the narrative of this country’s history if you don’t go looking for them.  More to learn, more to explore, more to be done.   Thanks to plays like Silent Sky, that call to action feels less like a chore and more like an adventure.  We make mistakes, but what amazing things humans can do when we put our mind to it.  Theatre Pro Rata has done an amazing thing here.  You should see it. (Silent Sky runs through March 8, 2020 at the Bell Museum in the Whitney and Elizabeth MacMillan Planetarium)