Review - ’Til Death: A Marriage Musical - Bucket Brigade - Some Warmth In The Middle of Winter, Some Light In A Very Dark Time - 4.5 stars 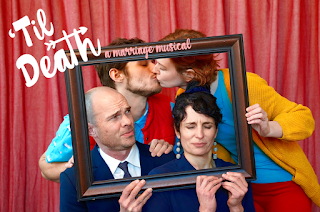 The unseen but well-meaning parents of Olivia (Vanessa Gamble) are trying to orchestrate a reunion.  They have arranged for the separate travel of both Olivia and her estranged husband Ethan (Jeremiah Gamble) to the family’s remote (but fully stocked) cabin in the mountains of Colorado.  It’s Olivia and Ethan’s anniversary weekend and Olivia’s parents think that time away from the job and the kids might be just the thing to get the two of them back together.  Ethan’s all for the surprise possibility of a reconciliation, but Olivia isn’t as keen on the idea of this romantic ambush.

“The person that you marry
Isn’t the person you stay married to.”

Also in the category of the unexpected, a freshly minted newlywed couple, Leslie (Damian Leverett) and Freddie (Anna Leverett) arrive at the cabin door, with car trouble, and a snowstorm moving in.  Olivia’s more than happy to extend some hospitality and use Leslie and Freddie as her human shields to deflect Ethan’s unwelcome attempts to bridge the distance between them.  But as secrets both couples have been keeping start to be revealed, things get more complicated than any of them were bargaining for.  Did I mention this is a musical romantic comedy and not strange re-imagining of Who’s Afraid of Virigina Woolf?

It’s ’Til Death: A Marriage Musical, from the folks at Bucket Brigade Theater.  Some companies have an annual Christmas show.  Bucket Brigade has a traditional Valentine’s season show.  The Gambles (who founded and run Bucket Brigade, and wrote ’Til Death) have been performing this fictional estrangement in their original musical annually since 2012, the last six years at Art House North, where it is being produced again this year.  Also back again, for their third year, are married actors the Leveretts as the newlyweds.  They’ve clearly got the material down by this point and it shows in the smooth delivery and easygoing execution of the whole production.  There’s even a cast album for sale (Potential spoiler alert for the review: I picked up a copy). Arranger Michael Pearce Donley is back at the piano for accompaniment - and he even plays through intermission, requests from the audience submitted when they stop at the box office to pick up their tickets.  There are also delicious, free cupcakes from a local neighborhood bakery (with a gluten free option available).

“When I met you, I suddenly wanted to undo all the stupid stuff I’ve ever done, just to be good enough to be with you.”

As has been true of all the previous Bucket Brigade productions I’ve born witness to (including one before they officially became the Bucket Brigade), the musical performances are great.  The songs are infectious.  And unlike all the other Bucket Brigade shows I’ve seen, ’Til Death isn’t a drama.  It’s a very funny comedy.  Sure it’s about serious things, but it doesn’t take itself too seriously.  Which is both its blessing and its only flaw.  Even in all the previous dramas, there was a healthy dose of comedy lurking somewhere around the edges.  ’Til Death might want to consider letting the drama in a bit more.

Now, I realize I’m coming to this party very late (nine years in, actually), so I don’t actually expect anything to change at this point.  ’Til Death has become a tradition for couples, who then bring their friends, who then bring their friends, and so on.  Why mess with success?  And honestly, as is, ’Til Death is a treat.  You can feel free to skip the rest of the review and just go buy your tickets.  ’Til Death is a fun show, some warmth in the middle of winter, and some light in the middle of a very dark time, go treat yourself to a little escapist fare.  We all deserve it.  The paragraphs below are just me noodling over dramaturgical stuff, and there might be some mild spoilers.  None of this should detract from what I’ve stated above already, it all still holds.  If it sounds like a show you’d enjoy, you should go.

“Guys, you’re an inspiration.”
“And somewhat of a cautionary tale.”

The only thing keeping this from being a five star show for me is I think one of the couples is getting short shrift.  And weirdly it’s the couple being portrayed by the Gambles, who wrote these roles for themselves.  Leslie and Freddie, played by Damian and Anna Leverett, are scripted and performed perfectly, but in part I think that’s because they’re the easier pair of the two couples.  Sure they’re keeping a couple of secrets from each other, but they’re young, and they’re new to this, and they haven’t accumulated so many years together between them that things have gotten all that complicated yet.  It’s simple enough for them to resolve their problems, because their problems aren’t all that big.  These two young oddballs may have their ups and downs, but they can manage them, with a little help.  They’re so perfect together they’re just this side of insufferable, but they’re so funny, and sing so beautifully, that you can forgive them all their quirks.  They’re just two crazy misfits in love who were lucky to find one another.

“Happy ever after, that’s where the story really starts.”

Olivia and Ethan, on the other hand, are complicated.  The script papers over a lot of their conflicts with each other, and because it’s a musical, and the songs are so wonderfully sung by both the Gambles, individually, together, and in combination with the Leveretts, ’Til Death almost convinces me.  Almost.  Olivia and Ethan need more space to genuinely, fully deal with the issues between them before I’m willing to buy that they’re on the road to reconciliation.  They’re either fooling themselves, or the script’s trying to fool me.

“I can’t be in two places at once.”
“Then choose the right one.”

The reason they appear to be separated, based on the information we get onstage, is Ethan’s been so focused on his all-consuming job in advertising that he’s been MIA at home to help Olivia with raising their two kids, one of whom isn’t fully autistic but is on the spectrum.  Is Ethan distracted by his job, or is he happy to have the excuse?  Based on his reaction to her being at the cabin, Ethan seems to like Olivia just fine, apart from the kids.  But I can understand Olivia thinking, if she’s essentially a single mom anyway, why bother with a guy who’s just going to add to her list of things someone wants from her when he’s not putting anything into the relationship himself, just taking.  Also, how do the financial logistics of this work?  I don’t recall a mention of a job that Olivia has, so does that mean she’s a stay at home mom and Ethan’s job is supporting both households?  It’s not clear.  Also, it’s not entirely clear how old the kids are.  I’m assuming they’re somewhere between kindergarten and 12th grade but I have no idea for sure.  Depending on how old the kids are, and how long the separation’s been - again, unclear - that’s a whole different set of variables that determine how I feel about a reconciliation of these two.  The play is clearly rooting for marriage to win and is willing to force the issue.  But some people are better off apart, and better parents for it - my parents were. I’m not lobbying for these characters to get divorced, I just need more convincing that it’s actually a better idea for them to stay together.

“I remember when we used to dream together.”

There are also three different rather abrupt revelations concerning Olivia in the second act that come quite literally out of nowhere, two of them being received as negatives that further complicate their situation which was already pretty fuzzy in terms of details.  And the play feels like it’s rushing to quickly clean them up, too, so we can have a happy ending.  The play isn’t that long, 90 minutes not including the intermission.  I think the story could spare Ethan and Olivia a little more time to genuinely deal with their problems - or maybe just come to a place where they’re willing to work on them, somehow, together.  Right now I don’t buy it.  I want to, but I feel like they’re not really facing the problems, so how can they solve them?

“And you wonder has he changed
Or is this the person he’s always been?”

The play is also wildly tilted in favor of the men.  There’s a false equivalency being promoted in the play between the secrets the women are keeping vs. the secrets the men are withholding.  As if the transgressions are equal and the women are just as in need of forgiveness as the men are.  The play, again, is even adding to Olivia’s side of the scale late in the game so she and Ethan don’t seem as uneven in things that need sorting out as the rest of the play would lead you to believe.  So when there’s a big song of forgiveness toward the end that I know is supposed to be winning me over, I’m sitting there thinking - "uh, she doesn’t need your forgiveness as much as you need hers, buddy. " It feels very patronizing in a way I’m sure the play is not intending.  I’m not rooting against Ethan and Olivia working it out.  The play just needs to give me more to hang it on than chemistry between the performers and some great singing voices.

“If I don’t kill you first,
I’ll be by your side til death.”

But the fact that I’m spending all this time gaming out the interpersonal relationships between these characters means that I’m invested in them.  I wouldn’t still be chewing it over, days later, if there was nothing there, if there wasn’t good work worth prodding to the next level.  Despite my misgivings, they got me.  That’s ’Til Death - it wins you over, sometimes in spite of yourself.  The music is great, the performers are great, and the whole thing moves along at such a fun clip that it’s hard to find any fault with it (though I know it appears I’ve really tried). ’Til Death is a solid piece of work, deftly executed, and that’s two places where a lot of new plays can fall short, particularly new musical theater.  Bucket Brigade delivers the smart, engaging entertainment once again.  We should encourage that, because it’s rare, even in a town full of theater like ours.