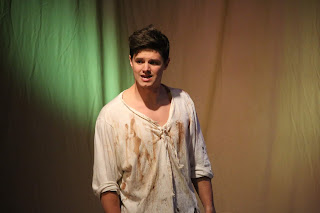 First of all, welcome back to Open Window Theatre!  A comeback story always makes me feel a bit better about the state of the world.  Open Window lost its previous home space quite unexpectedly in 2016.  It took them almost four years, but they’ve clawed their way back and seem the stronger for it (though I’m sure on some level they’re quite exhausted and just grateful to have finally made it to another opening night at long last).  Their famously loyal and supportive audience really came through with donations to help the theater relaunch in a new space – which is actually bigger, brighter and more inviting than their last (complete with their own restroom facilities – which, if you remember the old space, is a big leap forward).  And they’re opening what they’re calling their Redemption Season with the regional premiere of a new-ish (2002) play, Keith Bunin’s The World Over, an epic adventure story that’s part Homer’s Odyssey, part Shakespeare’s Pericles, part Old Testament trials of Job.  Theater companies don’t often get resurrection narratives of their own, offstage as well as on, so, hats off to the Open Window crew.  You made it.

“Once there was a country called Adamus that existed only for a single day.”

A geographer (Grant Hooyer) and his obsession with ancient maps provide the framing device for The World Over, and a useful functionary to helpfully give the audience a sense of place as the characters range over many countries and many years in the course of the story.  The mystery which launches the tale is a sequence of three recently excavated maps found in a cave, created over the space of just three days.  The first map and the last map show two different countries, one in the north, one in the south. But the map in the middle shows those two countries merged into one, under a completely different name.  So a country existed, just for a day, and then ceased to exist.  Why?  How?  The answer is tied up in the hero’s journey of Adam (no, not Garden of Eden’s Adam, a different Adam – though again, in the larger context of Open Window – Genesis, let there be stage lights, and our first leading character is named Adam – I could understand if that was part of the attraction).

“How is it that you haven’t died of heartbreak?”

A young man named Adam (Andrew Hey) is discovered living alone on a deserted island by a passing ship.  He doesn’t know where he came from or why he’s been left to himself all these years, far from any other human beings.  The ship’s troubadour spots a ring on Adam’s finger with a unique design that recalls a tale of the now mythical kingdom of Gildoray, a country lost to the modern world, now the subject of children’s stories before bedtime.  But the story seems real enough as he recounts it.  In fact, it’s pretty real for the audience as they see it all acted out before them.  Adam is similarly convinced that he must be the lost prince of Gildoray.  This doesn’t just mean he’s destined for great things - it also means his mother (Abby Day) has been living in danger all these years he’s been growing up, banished to the wilderness, waiting for him to come and rescue her.  It means his uncle killed his father and stole the throne (if that reminds you of another Shakespeare play, good for you) and the people of Gildoray are living under the harsh rule of a tyrant.  So they also need rescuing.  He needs to find his home and set things right.

But suddenly the ship is boarded by pirates who toss Adam overboard at his request, which leads to him being washed up on the shores of the kingdom of Peregrine, where he immediately runs into a princess named Isobel (Erika Kuhn) out for a night stroll on the beach. She’s the first woman he’s ever seen, so naturally she’s beautiful and he wants to help her out.  Which is handy, because the princess has a dark secret, which has to do with her evil father (Randy Schmeling) who keeps killing off all her potential suitors when they can’t manage to navigate through his multi-part challenge to win his daughter’s hand in marriage.  Would you be surprised if I told you, without entirely spoiling it, that Adam survives and he and Isobel run off together to try and save his mother and his supposedly mythical kingdom of Gildoray?  Good, on we go then.

Adam and Isobel next become embroiled in the travails of the kingdom of Dvolnek, where everyone’s newborn babies are nothing more than tasty snacks for the monstrous Gryphon (Tucker Brewster Schuster) who lives up on the mountain.  So Adam, of course, heads off to do battle with the Gryphon, who also can see your future by staring into your eyes.  The Gryphon has a cryptic warning for Adam, and the audience.  The people of Dvolnek are all set to make Adam their new leader, which would be fine with Isobel, too, since she’s discovered she’s pregnant.  But Adam still feels the call to save his mom, and their kingdom.  So the two of them board a ship and head off into stormy waters.  To say that everything goes spectacularly to crap right before intermission would be an understatement.

“I try to talk to men all the time.  Generally, only the crazy ones understand.”

Here’s the thing about The World Over at Open Window Theatre - that first act is a knockout, just fantastic theater.  The script has a driving action to it.  Director (and artistic director) Jeremy Stanbary has assembled a crack design time and winning cast (which also includes Elizabeth Efteland and Dawson D. Ehlke – whose many characters I can’t summarize without making this review even longer than it already is, suffice it to say they are equally as important to the story as everyone else I’ve already name-checked). They all present the fast-moving story in fine style.  The entire ensemble around Adam, all skillfully playing multiple roles, are dressed to the nines by costume designer Nate Farley who helps distinguish everyone’s various characters and kingdoms in vivid, visual ways.

“What a marvelous thing it is to abandon the ground!”

Not sure if it falls under costumes or props (Farley does both), but the multi-performer creations that are the Gryphon and a red-winged hawk (in act 2), are both theater magic – you can see all the strings, you know it’s a gimmick, and you’re still swept away by them, they’re great.  Set designer (and master carpenter) Sarah D. Pierucki has transformed Open Window’s black box warehouse space into something that’s part sailing ship (complete with crow’s nest) and part multi-level platform that takes on just as many locations as some of the actors have characters.

“You’re a stranger. Why have you sacrificed so much to save me?”
“You were in my path.”


Stanbary also had to step in as lighting and projection designer late in the game when they lost their original designer and seems to have done a darn good job on short notice.  The first act in particular works really well lighting-wise, and the projections from start to finish go a long way to helping establish location after location, as well as the passing of time (which picks up speed in act two).  Shout-out to the movement and fight choreographers (Corey Mills and Michael J. Anderson, respectively) because there’s a whole of both going on.  And the whole thing wouldn’t work at all without stage manager Ashley E. Stock and her crew keeping all the many plates spinning at the same time on this one.  They all put on a heck of a show.

“I won’t let you squander your days in search of a shadow.”

Honestly, you could leave at intermission after act one, and even with all the cliffhangers, and you’d still feel like you got your money’s worth.  Act one alone of The World Over is that entertaining.  Then act two happens and the whole thing comes unglued.  It’s not the production’s fault.  They’re still swinging for the fences and doing a fine job.  It’s the script that just starts unraveling.

In talking to friends about it afterward, I think I see where it lost me.  Because Adam’s origin story in Gildoray is acted out in front of us, we believe it.  Sure, everyone else around Adam says Gildorary doesn’t exist, but the audience believes it because Adam believes it – and we saw it.  If you wanted us to genuinely doubt it, you shouldn’t be presenting it so convincingly.  When Adam feels he must continue his quest at the end of act one, I don’t think he’s doing it for selfish reasons.  He’s not saying, “I need to be king!”  His mom’s in danger, his country’s in danger, his uncle needs to pay for the murder of his father.  These all seem like pretty heroic imperatives.  Sure, even Isobel has doubts, but she goes with Adam.  We have no good reason to doubt that, though dangerous, this is the right thing to do and Adam’s doing it for the right reasons.  Everything’s been building to this.  And then the playwright seems to say, “Screw it, let’s do something completely different.”  Now, that something completely different does ultimately lead to an explanation of the maps and the mysterious disappearing country that only exists for a day (and the creation of that country and the reason for it, are actually quite moving and lovely).  However, act two just seems to put Adam through a random, unconnected series of trials that don’t really add up to anything.  It’s just a series of disappointments, for him and for us.

“I know there are terrible things in the dark.”

Oh wait, is that a reunion with - ?  Never mind.  Moving on.  Wow, here’s an obstacle or some perilous situation.  Never mind.  Moving on.  Bunin’s script engages these two strategies repeatedly in act two, and it kind of makes you wonder why you invested so fully in act one.  I understand the writer wants us to invest in these new characters, but they weren’t the ones we spent the previous hour with.  We met them literally five minutes ago.  I need a little more wind-up in order to care about them the way the script and the production want me to.  It all seems very random in a way that act one did not.  It doesn’t seem like the story has a clear idea where it’s going, and why any given scene in act two is important for getting us there.  Again, not the actors’ faults.  They’re still going all out with the material the writer has given them.

“Nature cares nothing for your heartbreak, why should you?”

Side note: There were also some baffling, out of left field, mincing gay stereotypes right at the top of act two that kind of pulled me out of the story (yanked me out, to be honest).  And it wasn’t the foppishness of a later character in act two, it wasn’t a royal court affectation kind of thing.  In my notes, I scribbled, “Are they drunk or high?  Are they gay?  Are we supposed to think they’re men playing women?”  But like so much in act two, never mind, moving on, characters removed by convenient plague so we never have to deal with them again.  Also, fair warning for the squeamish: there are a lot of throats getting slit (though no rivers of stage blood involved), and no less than three women give birth onstage in the first act (one of them by involuntary caesarean section) with newborns get tossed around like so much trash (again, no blood and guts involved, but the actors are pretty convincing in their labor and delivery pains).

“You must not curse the earth for turning.”