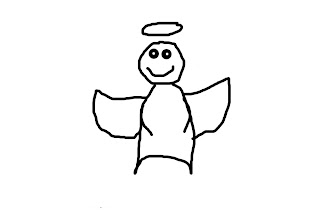 I remain an eternal optimist where theater and depictions of religion and spirituality are concerned.  Of course, that means I’m setting myself up for a fair amount of disappointment.  But theater, particularly the Fringe, has the opportunity to dig into knottier subjects with a little more nuance (and immediacy) than a lot of TV and film.  Unfortunately, since Christianity (and pretty much all religions) have been hijacked in the media by a bunch of people making the biggest noise or the biggest mess, the vast majority of people of faith who actually have working brains don’t get a lot of coverage. (After all, who wants to watch people being nice and helping one another, thinking of something bigger than themselves?  Where’s the drama and conflict in that?)

“You ever feel like no one would notice if you just stopped?”

Mom and I approached two shows about religion on our second day of Fringing with a fair amount of skepticism (even though I had one of them, this one, in my Top Ten for the year going into the festival).  But, for a change, in both cases, we were rewarded.  One of those uncharacteristically good Fringe shows playing faith for laughs was Joey Hamburger’s Deus Ex Machina.

I like the concept of deus ex machina (or, god in the machine) from ancient Greek theater anyway, just for starters.  A god appears at the end of the play, just when things seem impossible for the hero, and everything works out after all (for better or for worse).  So anyone who uses the phrase Deus Ex Machina already has points in my book before the show even starts.

“Are you there God?”
“If I had a nickel for every time I heard somebody say that…”
I’d also had the chance to catch Joey Hamburger performing a last minute replacement show in the Fringe a couple of years back, a solo show he wrote for himself called Blind Date.  So I knew the guy could both write and act comedy.  Hamburger delivers again with Deus Ex Machina, in which he also plays God.  (There’s a joke here about getting down on my knees, but I’ll just let that pass.)  In another amusing bit of taking on two roles in the production, director Michael Hugh Torsch is also Death.

“The scythe and the hood really give the wrong impression.”

In the world of Deus Ex Machina, God (Hamburger) has stopped writing.  He’s run out of ideas, he’s even run out of ideas he hasn’t already recycled thousands of times.  He’s decided instead to turn to painting, which he is unfortunately very bad at.

But without God driving the storyline of the known universe, things are coming apart, or at least changing in ways the human race isn’t comfortable with.  People have stopped dying, which is very inconvenient for Death (Torsch), Richard the coffin maker (Jacob Mobley), and criminals in general (Elliot Drolet, Michael Rogers).  The weather is perpetually good.  Newscasters (Rogers again) don’t have anything to say because their diet of bad news has dried up. A modern day couple named Adam (Robb Goetzke) and Eve (Laura Hickey) can’t even manage to stay mad at each other and have a decent fight.  The drama that has been the fuel of their relationship keeps evaporating and they end up saying and doing nice things for each other instead.  It’s driving them nuts.

“I am so happy right now.  This is disgusting.”

Death manages to get God back to the writing desk to whip up a sequel to his most popular story - Jesus, Episode 2.  In it, Jesus (Rogers, yet again) will enter a surfing competition.  The vacuum left by God’s interruption in writing has helped generate the world’s biggest wave.  Everyone has come out to see the surf competition, not only for Jesus, but in hopes that the greatest surfer of all time, a long unseen recluse, will reappear to catch this monster wave.  Unfortunately, a surf scientist (Drolet again) is forecasting that this wave might also wipe out all that humanity who’ve come to watch.  It might do the rest of the earth in as well.

Now some, or maybe most, of that might sound borderline blasphemous but it turns out Hamburger knows his subject.  So there’s a lot of comedy, but a lot of food for thought running along underneath it.  It’s not quite full-on satire but it’s close.  It’s comedy the way I like it, smart as well as funny.  You can just coast along on the jokes and ridiculous situations, or you can ponder a bit, depending on your mood.  But you won’t feel dumb or disrespected when it’s over.  (Plus, as an added bonus, there’s a surf rock version of Hava Nagila.)  Deus Ex Machina is a win all the way around in that regard.  (There’s a joke about believing in the power of theater again to deal honestly with religion, but I think I’ll let that pass as well.  You don’t need puns from me, you need to go see Hamburger’s comedy instead.)