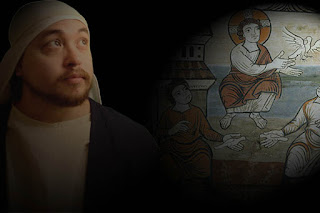 Tweet Review - The Secret Book of Jesus - mom admits it may partly be the subject matter, but she thinks this is phillip's best show yet, 5 stars

The tweet above was not a foregone conclusion.  Just like Deus Ex Machina, Mom and I went into this one secure in the knowledge that Maximum Verbosity’s phillip andrew bennett low is a proven performer, a sharp writer and a relentless researcher.  So The Secret Book of Jesus wasn’t going to be some haphazard, dubiously sourced bit of religious sensationalism.

Having been burned by other theater tackling religion and faith before, however, one can be forgiven for skepticism.  Particularly when confronted with show publicity saying things like this:

“Hidden in Egyptian tombs. Buried in earthenware jars. Traded in dark antiquities markets. For the first time in history, the Gospels suppressed or ignored by the early church have been combined to give a complete portrait of the life of Jesus: his parents' miraculous marriage; his bizarre killing sprees as an infant; his journey down into Hell; his apostles' interrogation of Satan. A new face of Jesus, concealed for centuries, emerges at last: a dark child, tinged by holy madness, bearing strange powers, prone to deadly bursts of rage. A show for the faithful and heretic alike -- two thousand years in the making.”

The clever thing low has done here is use the outlines of the story of Jesus most people know as a familiar (even comforting) framework in which to place the lesser known wilder Jesus stories of the books of the Apocrypha.

“You are responsible for the child who did this!”

He’s also edited the whole thing down brilliantly in such a way that nothing’s really extraneous.  Everything ties together.  Thieves met on the road in Jesus’ childhood end up being the same thieves hung beside him when he is on the cross.

“The dead boy got up and walked away.”

A child young Jesus tussles with turns out to be the Judas Iscariot who will later follow him as a disciple, then betray him to the authorities in exchange for 30 pieces of silver.  A jar of ointment key to another apocryphal story is revealed to be the very ointment Mary Magdalene would use to wash an adult Jesus’ feet, much to his disciples' consternation.

“The earth that held his decaying body gave him up, alive.”

And, of course, this being a Maximum Verbosity show, it would be incomplete without an aside related to the Holy Grail, and low’s ongoing excavation and cracking open of the legends of King Arthur and the knights of the roundtable to create a whole other pile of rough and tumble Fringe shows over the years.

“If I could, I would destroy you like I have destroyed so many of your kind.”

This Jesus, Mary and Joseph, all shown to have rougher edges, tempers, and senses of humor, become so human, as do those around them, that you have to remind yourself they are all central figures in a religious narrative that some people never think twice about.  The script is always happy to throw you a familiar image or exchange in order to drive this point home - oh, yes, we’re talking about *that* Jesus.  This isn’t a show that makes a case for Christianity or belief.  It’s not about proselytizing.  low just knows he’s got a good story here, and he’s going to dive in and tell it.

“Behold the devil and death, condemned by the tree.”

Listening to tales of supernatural powers and heaven and hell, you can picture in your head all the special effects that might be necessary to pull off a film or TV miniseries version of this story.  Luckily here, all we need is the storytelling prowess of low to amuse and astound (and sometimes intimidate) us.  low loves words, and loves a poetic and powerful turn of phrase even more.  This story is stuffed with them and he makes the most of the opportunity.

“On the third day after the birth, Mary emerged from the cave.”

He is also aware of, and takes advantage of, familiar numbers, symbols and imagery from the Bible most people know, peppering the script with these clues without belaboring them.  If you know the reference, you appreciate the script on a whole other level.  If you don’t, then it’s just part of a story that keeps barreling forward and maybe next Christmas or Easter season you might hear something and go, “Hey, wait a minute, I remember hearing that back in August.”

I suppose some of the source material might make some folks uncomfortable.  But if you’re willing to go along for the ride, this show is respectful without being wooden, and rollicking without being blasphemous (though, I guess that depends on your definition and pain threshold for blasphemy).  I figure, if my mother, an ordained minister once married to another ordained minister, and heavily involved in church her whole life, right up to the present day, doesn’t take offense, then there’s no offense to be taken.  In fact, The Secret Book of Jesus inspired mom to break out her own copy of the Apocrypha and give it another look.  She never knows where the next sermon is going to come from.  And a human Jesus, and his all too human family, doesn’t sound like a bad place to start.

Hey there, Matthew -- just wanted to take a moment to express my gratitude for another exceedingly thoughtful and generous review. I'm glad that you enjoyed this one, and looking forward to reading your criticism in future!