Fringe 2016 - Ball - The Catalysts - If A Man Is Permitted To Channel Judy Garland or Liza Minnelli, It's Probably Max - 5 stars 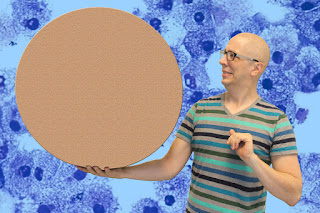 Tweet review - #mnfringe Ball: A Musical Tribute to My Lost Testicle; Mom says "That was spectacular. HE is spectacular" - that about sums it up, 5 stars

Max Wojtanowicz is so talented, it’s honestly kind of depressing for other artists.  I mean, seriously, how do we keep up?  Max got diagnosed with stage 3 testicular cancer in January of this year, went through surgery and chemotherapy (while also performing in shows like Theater Latte Da’s C), wrote and is now performing a fantastic Fringe show (called Ball: A Musical Tribute To My Lost Testicle) about his experience with cancer in August.  Really?  That’s a thing human beings can do?  I’m clearly not working hard enough.

“I can see you’re gettin’ lively as I pole dance ‘round the I.V.”

Ball: A Musical Tribute To My Lost Testicle is - well, let me put it this way.  My mom is 78 years old.  To walk any distance now when we leave the house she has to use a cane.  We need to avoid stairs as much as possible.  It is not an easy thing for my mother to get up and down out of chair.  The moment Max Wojtanowicz was done performing, that woman was on her feet with the rest of the audience giving him a standing ovation.  She got up faster than I did.  Her first words when it was over were, “That was spectacular.  HE is spectacular.”  Yeah.  Yeah, he is.

Max isn’t interested in presenting another pastel-colored Lifetime movie for television about battling cancer.  Thankfully he’s still close enough to the experience that he recalls the rough edges and prickly moments with clarity and detail.  But he takes that unsparing approach and funnels it through his two favorite performing tools, song and comedy.  And he does it brilliantly.  Whether it’s a telling reinterpretation of a pre-existing song from the musical theater canon, or taking one of those tunes and offering up his own satirical lyrics (“We’ll Take Manhattan” becomes “At HCMC,” for instance), or presenting a completely original song of his own, Wojtanowicz slays this thing.

His one remaining ball, personified by a puppet, gets to sing a medley of songs featuring the word One

Max is using this play to process his own experience. He’s using this play to warn others.  He’s using this play to thank all the people who work in the cancer care industry and caretakers of loved ones, and applaud his fellow cancer survivors.  All of that makes it sound like this play would be hard to sit through.  But there’s so much laughter and so much song that the performance is the exact opposite of a downer or a well-intentioned but dull documentary.  It’s a celebration of life.  The man is belting out songs because he still can.  If that isn’t giving an enormous middle finger to death, I don’t know what is.

Max’s father wasn’t as lucky in his own battle with cancer.  Max knows he’s fortunate.  He’s not placing himself on any pedestal.  In fact he’s kind of embarrassed to be a standard bearer when so many other people fought so much harder and lost so much more.  But this is the story he’s been given.  And these are the skills he has with which to tell it.  And frankly, he knocks the damn thing out of the park.  He could be overcome with emotion at any moment, and several times very nearly is.  But he always pulls himself back from the edge and delivers a performance like the professional he is.  Some solo shows are self-indulgent “look at me” exercises.  Ball isn’t one of those.  This is a story that needs to be told, in the hands of a storyteller who knows exactly how to tell it.

“Welcome to the poison party.”

Ball: A Musical Tribute To My Lost Testicle is fantastic.  Max as a performer is inspiring.  (But, uh, Max, could you dial the brilliance down just a little bit?  You’re making the rest of us look bad.  I’m kidding, of course.  Go on and set the bar high.  By the time we catch up, you’ll be that much further ahead).  Oh, if it wasn’t obvious, see this show.