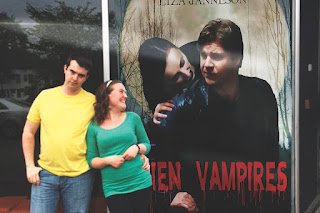 What I neglected to mention in that tweet (140 characters don’t leave a lot of room for complexity) is that it’s a straight(ish) relationship that’s getting a little extra juice from a walk on the wild side in Celebrity Exception.  Kayla (Lizi Shea) insists that everyone gets a celebrity exception - one celebrity that, if the opportunity presents itself, you can have sex with them and it isn’t cheating.  Kayla’s boyfriend Mark (Corey DiNardo) takes exception to the idea of a celebrity exception, even if the liaison is purely hypothetical.  And he’s particularly put out by that thought that the movie star in question is Xander Lucas (Daniel Flohr), who he considers a talentless hack for starring in things like Alien Vampire Hunter, Machine Gun Ninja, and Crack Dealer With A Heart of Gold.  The attractiveness of Xander Lucas seems to be the only thing that Kayla and Mark’s sister Steph (Emily Rose Duea) can agree on, since the two women had a falling out over the business they started together, and their slightly checkered (shared) social past.

“Think, Jack! What do you remember, before the orphanage?”
“My God! I’m an alien, too!”

When Steph and Mark run into Xander Lucas (in town shooting his latest film) at a local coffee shop, Steph fangirls herself into an embarrassed quick exit.  But Xander joins Mark at his table to assure him he has no designs on Kayla.  Xander would much rather have sex with Mark.  Looks like Xander may get to be someone’s celebrity exception after all.

“It’s like the Queen of England or the Pope.  Even if you didn’t want to, you’d almost have to, just for the story.”

I’ve loved Katherine Glover’s script for Celebrity Exception since the first moment we all read it in an early version back in our writing group back in 2014.  It was hilarious then, and it’s even more hilarious in the hands of these actors and director Callie Meiners now.  It premiered in the Ottawa Fringe last year with a different company, and also had a brief run with this new bunch of artists at the Phoenix Theater this past spring.  I was happy to know I’d get a chance to finally see it in our Fringe this summer, and it didn’t disappoint.  My mom knew nothing about it going in, other than she’s enjoyed all the Katherine Glover shows she’s seen in the past - Fringe 2009’s A Cynic Tells Love Stories, Fringe 2012’s Dead Wrong, and Fringe 2013’s Burning Brothels.  Now, all of those were solo shows performed by Kathernine herself, each one more different than the last.  Celebrity Exception is just another branch of Glover’s evolution as an artist.

“You let some strange dude suck you off?  That’s awesome!”

The thing that makes the play more than just your run-of-the-mill wacky romantic comedy is the progressive, adult way it deals with sexuality, and the fact that for many people, it’s fluid.  You’d think more writers would engage sexuality this way, because it gives you so many more opportunities to tell interesting stories.  The characters don’t treat the Xander Lucas/Mark flirtation as something shocking or gross or out of the ordinary.  They actually, each in their own way, find it kind of hot, and healthy.

Xander may be a guy out for some recreational sex, but he’s not the stereotypical predatory homosexual of days gone by, trying desperately to convert a straight man.  And Mark isn’t repressed or closeted and then suddenly gay.  Xander genuinely wants a pal to hang out with, and Mark reminds him of a guy he once cared for back in his starving artist days acting in theater.  Steph is actually more upset (and disbelieving) that Xander is gay than Kayla is angry about Xander coming on to her boyfriend.

“I get all the drama of an affair without the guilt of actually cheating.”

Celebrity Exception is a whole lot of fun - smartly written, directed and acted by all involved.  I wish more romantic comedies were like this one - both in the romance and the comedy departments.