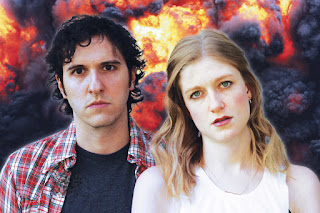 I missed the first Couple Fight last year, but I like the concept: people reenacting the most ridiculous fight they ever had with a loved one, so they can laugh at themselves at the same time we do.

“You don’t think you’re Mom, and that makes you more Mom than Mom!”

There’s a lot of couples in this second outing of Couple Fight, friends and family edition.  There’s husband and wife team Rachael Davies and Andy Kraft, sisters Angie Martin and Casey Haeg, mother/daughter duo Pat and Emily Schmidt; friend pairings Sulia Altenberg and BriAnna Daniels, Anna Weggel-Reed and Richie McLarn, and Andy Hillbrands and Katy Kessler; and another husband/wife team that’s actually reenacting a battle of wills between mother Lacey Zeiler and toddler Lila (represented here by husband and father John Zeiler).  Playing yourself rather than a character is tough, and some performers were more successful at it than others.

Each of the fights was entertaining, but as the show continued I found myself wondering if I’d be getting more out of the fights if they were allowed more time to breathe.  Maybe if we had fewer couples and longer fights, they might be able to pay off more effectively.  Things felt a little crowded and a little rushed.

“I’m not done with my tantrum yet.”

For instance, while the friend fight between Sulia and BriAnna felt a little unfocused, I found the subject they were struggling with - race and how to discuss it in a way that wasn’t just trying to make uptight white people feel better - really intriguing.  Give them a director with a firmer hand and a little more time to play out that fight and that could be powerful as well as uncomfortably funny.

Likewise, Andy and Katy’s fight (choosing sides in the Bernie vs. Hillary battle for the Democratic nomination for president) was actually a multi-part fight across several months.  No part of it really nailed the extremely fraught feeling I know many friends have had debating with people they respect about that choice - the lens they choose to look at the other candidate through, and the facts they choose to recite at one another.  Those are the kind of fights that can end a friendship if people stop listening to one another and close their minds as well as their ears.  That fight needed more time to land its blows, and less opportunity to defuse the situation by allowing them the chance to step away and restart.

Even Anna and Richie’s fight over the university’s indoor/outdoor complete smoking ban could have used more space.  This was probably the most successful of these three examples in actually seeming like a fight with stakes.  But the complexities of that fight, both personally and politically, felt short-handed rather than fully realized.  It seemed the most like a fight, and got some heartier laughs, but it still felt like it could have been pushed further.

“I’m so glad our party’s unified.”

The two most successful fights were family fights.  Sisters Angie and Casey who kick off the evening, fighting while driving, had the most detailed and personal fight.  They also played with the convention of being in the round on stage for better laughs, turning around to face another part of the audience when their “car” was turning around, too.  Anyone who’s ridden with someone whose driving habits they can’t stand (especially if it’s a member of your family) completely understood the dynamics of this fight, which made it all the funnier.  They didn’t edit the family nature of the fight to make it nicer either.  In the spirit of the concept they allowed their fight to be just a ridiculous as fights between siblings often get.  (Yes, I have a younger brother, why do you ask?)

John Zeiler in a T-shirt and diaper pretending to be his own toddler daughter that wife Lacey is trying to get to go to bed probably isn’t fair to anyone else competing with them in the fight-off.  It’s weird, cute, and the physical comedy of trying to get a toddler into footie pajamas were the most genuinely earned laughs of the show.  The fact that he also played himself taking a call in mid-toddler fight, and then was using his portrayal of his daughter to get a little “booby” time as himself were both pretty fun variations on the convention of the couple fight.

“We knew I was gonna be a CONvergence widow.”

Some fights seemed like they were stretching their premise pretty thin, but most of the fights felt like if they had a little more time they might be more substantial, both as fights and entertainment.  But overall, the full show was still a win by Fringe comedy standards.  No one will go away not having chuckled, chortled or guffawed here.  There’s a lot of laughs to go around in Couple Fight 2: Friends and Family.  Keep tweaking the formula, who knows what you could end up with?