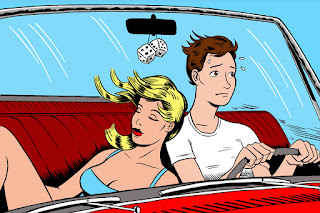 Some of the first things Mom said (and I had been thinking) after our friend Daniel Pinkerton got through recounting the tales of his brush with the law in his outlaw summer of 1966 were, “He’s lucky it was the sixties.  Today, he’d probably be in jail” and “He’s also lucky he was a white teenager in the suburbs.”  It’s strange how radically the turbulent current events of the past couple of years can cause you to look at things in a very different way.

“I see you cut short another career in child prostitution.”

Pinkerton’s Grand Theft Autobiography is a tale of fifty years ago that doesn’t scan with the America we see today.  That’s got its pluses and it’s minuses.  It’s a simple tale of a simpler time.  “Borrowing” cars, teenage sexual awakening, forging checks, and running away from home, trying to emulate the fake origin stories of your rock and roll icons, all that seems kind of quaint now.  And it’s nice to retreat for an hour into that kind of story.

Pinkerton’s friendly, easy-going delivery makes his story go down easy.  And musician Gary Rue and his Fringe band The Delinquents (Megan Mahoney on electronic bass, Kenneth Watson, Jr. on drums, both on backup vocals to Rue’s lead singer on guitar) take Rue’s original songs and give them a 50s sort of Beach Boys bounce and drive.  The musical interludes between tales - and on carefully chosen water breaks for the storyteller - give the whole show a little extra oomph to keep the audience focused.

Grand Theft Autobiography is a nicely put together Fringe package that reinforces the truism that we all have a story to tell.