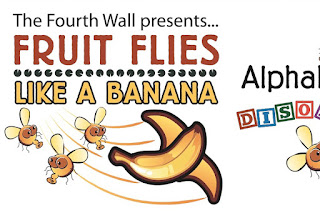 Tweet Review - #mnfringe Fruit Flies Like A Banana: just as much fun as they were last year; and they were a heck of a lot of fun last year - 5 stars

In the transition period last year when the Twin Cities Daily Planet was still in the process of getting out of the business of Fringe-blogging and I was moving back into this little piece of free-floating blog real estate, I didn’t end up reviewing The Fourth Wall’s first version of Fruit Flies Like A Banana - even though I saw it twice, once with Mom and then again when they got the encore slot for their venue over at the Theater Garage.  The three artists of The Fourth Wall - Hilary Abigana, C. Neil Parsons and Greg Jukes - are cheerfully relentless self-promoters.  Even the very few people who didn’t go to their show last year were well aware of its existence.  Glowing reviews and positive word of mouth finished the job that Hilary, Neil and Greg began.  And now they’re back!

The Fourth Wall bills themselves as hybrid artists.  They are musicians, dancers, physical theater performers, and singers.  Often, they do all at once.  The Fruit Flies Like a Banana formula goes something like this: there are twenty-something short pieces of varying shapes, sizes and content.  They are all to get crammed into a Fringe-length package of time.  The audience determines the order of the pieces.  Last year, each piece had a title that was on a series of large laminated cards.  The artists would run out into the audience and have an audience member pick a card.  That would determine what The Fourth Wall would do next.  Piece completed, someone else picks another card, until time runs out or all the pieces are done.

This year it’s Fruit Flies Like A Banana: Alphabetical Disorder, so all the letters of the alphabet are strung out on a clothesline.  They run out into the audience, point to an audience member, that person picks a letter, and off we go.  Thankfully it is only at the end with a handful of letters to go that they open up to the audience at large, many of which are more than happy to bellow competing letters at the top of their lungs.

The pieces themselves are all delightful little bits of musical and physical theater whimsy.  Hilary plays the flute and piccolo and does most of the singing required.  Neil plays the bass trombone, euphonium, toy piano and ukulele.  Greg plays percussion - drums and vibraphone (no, that’s not a xylophone), accordion and toy piano.  There’s also liberal use of colorful plastic boom whackers (in which the audience sometimes gets to participate).

Most of the time it’s Hilary on flute or piccolo, Neil on bass trombone, and Greg on the vibraphone.  But they are pretty much never standing still.  They’re dancing, bouncing around, twirling, sliding around, hanging upside down, riding on one another’s backs, crowding and jockeying for position.  Pretty much any kind of fantastical, goofy, strange situation they can contort themselves into, they do it.  Sometimes it’s in perfect keeping to the mood of the music, sometimes it’s in direct opposition to it.

I have a hard enough time just playing a musical instrument standing still.  They’re doing it in a perpetual state of motion.  They have all twenty-odd pieces memorized, and they have to pull them out of their heads in random order.  At the same time they make it look effortless, you’re nearly always aware of how tricky this high-wire act of theirs is.  It’s a treat just to kick back and watch them do one seemingly impossible thing after another.

The Fourth Wall’s Fruit Flies Like A Banana was unlike anything else in the Fringe last year, and there’s nothing like it in this year’s festival either.  Grab yourself a ticket and delight in its uniqueness.